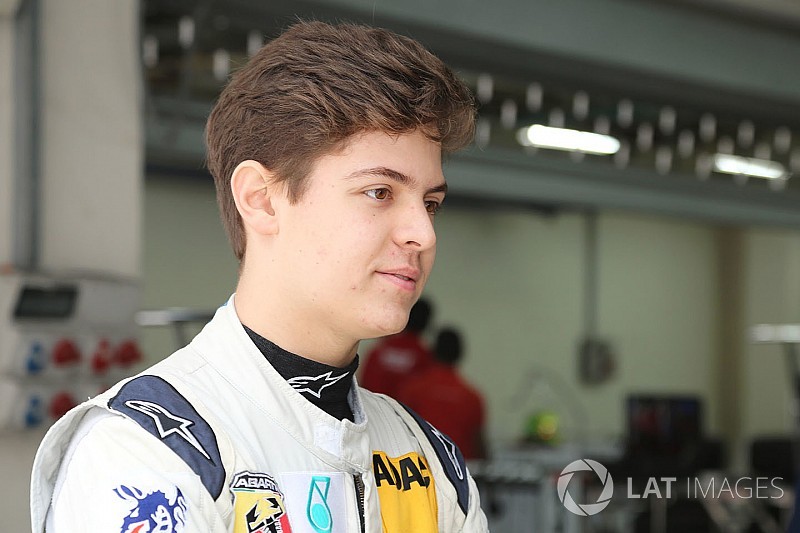 Polesitter Julien Falchero was slow off the line when the 10-lap race got underway, allowing fellow front-row starter Maldonado to breeze past and take the lead.

Falchero, meanwhile, continued to slip down the order, losing a place to Alex Karkosik at Turn 1 and then Race 1 winner Drugovich on lap 2.

Two laps later Karkosik spun on his own in the second sector, turning the race into a two-horse battle between Maldonado and Drugovich.

The Brazilian was closing in on Maldonado lap-by-lap and was right on his tail before the final tour.

After taking advantage of the slipstream, he dived down the inside of the Venezuelan at Turn 1 to steal the lead.

Maldonado fell back into the clutches of Presley Martono, and Drugovich was able to cruise to the chequered flag and record his third-ever win in the MRF Challenge.

Eventually, only 0.01s separated Maldonado and Martono in second and third, as the duo kept fighting until the very end.

Behind the top three, Falchero finished fourth, while USF2000 runner-up Rinus van Kalmthout staged an impressive recovery drive from the rear of the field to finish fifth.

The Dutchman locked wheels with Robert Megennis at Turn 1, but both drivers escaped without any damage to their cars.

Pavan Ravishankar made a bold move over Dylan Young to reclaim seventh, while Michelangelo Amendola and Daniel Frost completed the top 10.