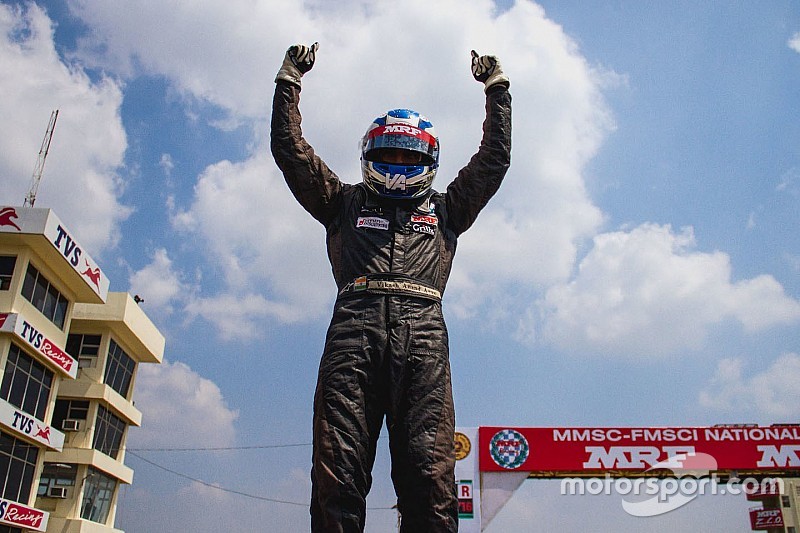 Newly-crowned MRF F1600 championship Vikash Anand feels he is better prepared for MRF Challenge and the Mazda Road to Indy shootout shot, after making a successful return to racing this year.

Anand moved away from racetrack 18 months ago, having decided to pursue a more conventional career and complete his studies.

However, he returned to racing in Round 2 of F1600 and went on to win the title taking seven wins along with two podiums, beating defending champion Karthik Tharani by 10 points, despite having missed the first round.

With the title in his kitty, Anand is now slated for a full-season drive in the MRF Challenge, the details of which is yet to be sorted.

Nevertheless, the Chennai-based driver is upbeat about his chances, especially after having already competed in the championship in the 2013/14 and 2014/15 (two rounds) season.

“I was very young and I didn’t have any practice [when I first competed in MRF Challenge]. It was very new. It took time to learn. Second season wasn’t too bad,’’ Anand told Motorsport.com.

"It is a very good benchmark for Indian drivers. And it is all about how well we can make use of the given opportunity.”

Along with the MRF Challenge drive, the Indian also won a Road to Indy shootout shot, slated for December, the winner of which will get a full season in the US F2000 series.

"I’m looking forward to that [as well],'' he said. "It's a great opportunity for an Indian driver to take part in such a scholarship programme."

Lack of racing not a disadvantage

For any race driver, seat time is paramount in his career and with Anand missing a year and half of racing, the 22-year-old started at a disadvantage [in Round 2] - which he refuted.

"When I came back for my round in March, I just had one thing in mind - the things which I learned initially in racing,’’ he said.

"I just wanted to follow the instructions of my coaches. Being an experienced driver, a year long break is actually not too much.

“Also, it didn’t really add to any disadvantage for me, it was actually an advantage. I came back in with a very fresh mind,’’ he added.

When asked as to why he left racing, the answer was similar to what a lot of young Indian drivers face in the country - education.

"I thought of concentrating more on education and get back to racing after a period of time, but I couldn’t give up racing,'' he said.

Anand also revealed that he wasn't keen on doing the F1600, but with lack of opportunities, he eventually raced in the second round.

"I wasn’t very keen on doing the F1600 championship initially. But then I thought, I should be racing something.

"So I did the second round of the championship which worked well for me [with two wins] and so I continued my season."