Soundari A and Olesya Dias took win in Round 2 of the Honda and Alisha Abdullah Training Academy races respectively, at Madras Motor Race Track.

It was a perfect start from the Chennai-based rider in the Honda, to go from fourth to take the lead in the opening lap, as polesitter Pooja Dabhi had a bad getaway.

Behind, Aishwarya A too lost a place as Ten10 rider Shruthi N dropped at the back of the pack, ultimately retiring on Lap 3.

Up ahead, Dabhi came back on Soundari as both separated by mere less than half a second throughout the four-lap race.

In the end, Soundari had enough to take her maiden win with round one winner Dabhi settling for second, 0.341s behind.

It was a real battle for the final podium spot as Aishwarya fended off the pressure from Ryhana Bee to finish third, both separated by a mere 0.121s at the chequered flag.

Niranjanie and Jennifer Christapaul were the final two finishers at fifth and sixth. 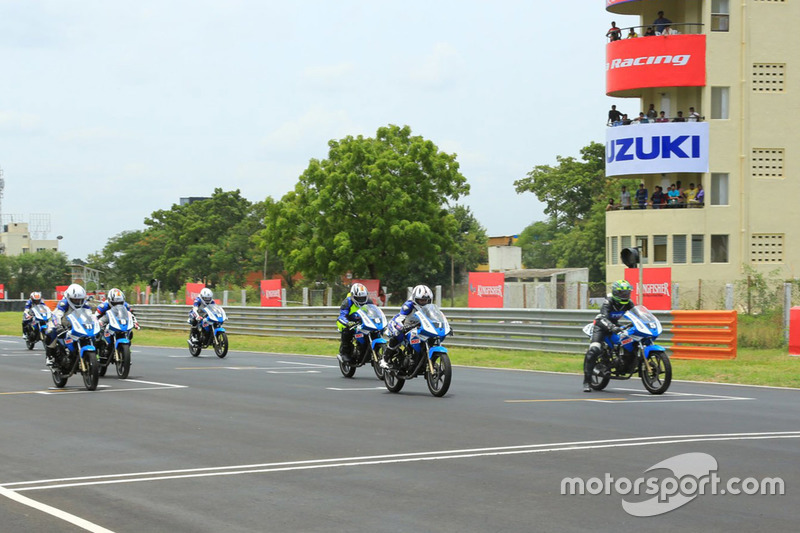 The Goa-based Dias got a good start from pole on the TVS bike, with front-row started Aishwarya M slotting right behind the leader.

Dias thwarted rivals lap by lap as she took the race by a massive margin of 8.554s, beating Aishwarya while clocking the fastest lap of 2m24.663s, which was about six seconds faster than the next best.

Tulasi, Haritha R and Prathibha completed a distant top eight - the trio separated by 5.628s over the chequered flag.

Four riders barring Harshita, were allowed to take part in the race despite missing out on the 107% qualifying rule.