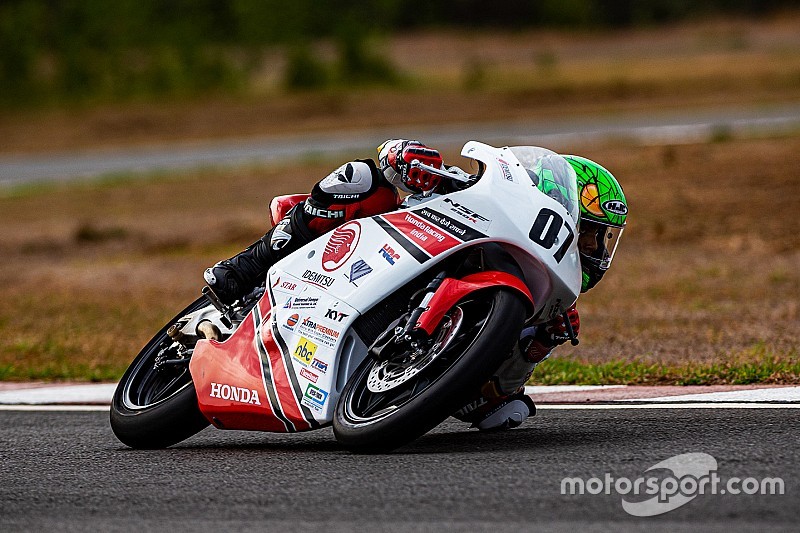 14-year-old Mohammed Mikail claimed a historic victory as Honda’s new NSF 250 category for Moto3-spec bikes got off to a flying start in Chennai.

Mikail had qualified on pole position with a stonking lap of 1m48.889 but made a shocking getaway, losing the lead to fellow front-row starter Kritik Habib.

However, it took little time for the teenager to recoup, and on turn 10 he made a textbook move on Habib to seize the top spot once again.

Habib initially managed to stay in the tow of Mikail, before the Chennai-based racer upped his pace, building a three-second gap up front.

That made Habib vulnerable to Varoon and Kavin Samaar Quintal, the two catching the Katanatak-based rider by the penultimate lap of the race.

Varoon dived down the inside of Habib at turn 1 on the final tour, with Quintali following a few corners later to push him outside the podium spots.

Up front, Mikail went on to take a comfortable win, despite his advantage dropping from a peak of three seconds to 2.2s at the chequered flag.

Varoon set the fastest lap on the very final tour to take second, with Quintal and Habib finishing third and fourth respectively.

12-year-old Sarthak Shrikanth Chava, the youngest rider on the grid, was fifth, with Mohsin and Charan T rounding off the classified finishers.

Geoffrey was the only retiree from the race, the 14-year-old crashing out at turn 10 on the opening lap of the race.

The first race for the NSF 250 category marked a historic moment for Indian motorsport, providing budding Indian riders with a throrough-bred race bike - instead of modified production bikes that have been commonplace till now.