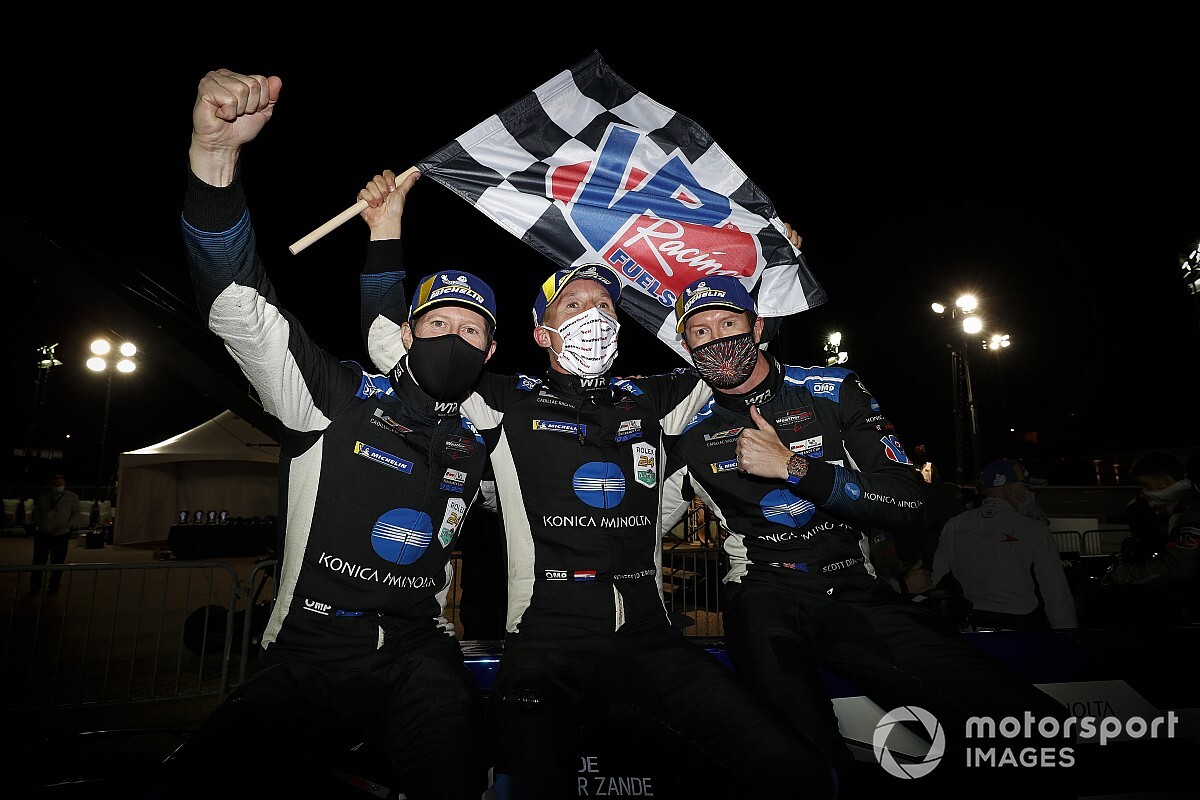 Alexander Rossi in the Acura ARX-05 snatched the lead from Felipe Nasr’s Action Express Racing Cadillac DPi-V.R with 1hr42min to go but Nasr held on, hung tough, repassed for a split second at Turn 10B and went slightly long, allowing Rossi back ahead.

Meanwhile when Dixon handed over the Wayne Taylor Racing Cadillac to Ryan Briscoe, the full-timer dropped it at Turn 10 which dropped him 25sec behind the lead battle.

With 74mins to go, Nasr pitted to hand over to Derani, while Rossi stopped one lap later and left the wheel for Taylor. The pair emerged just 1.2sec apart, and Derani used his warmer tires to make the outside pass at Turn 10A and made it stick.

However, these two remained within a second, regularly jockeying for position, especially in the Turn 10 brake zone, the Cadillac appearing stronger through the curves, and the Acura stronger in a straight line. Meanwhile, van der Zande was chipping away at the pair of them…

Taylor followed Derani into the pits for his final stop and with one lap’s worth less fuel to put in – having previously stopped a lap later – the Team Penske team sent Taylor out ahead. However, Derani was in no mood to settle for second and into Turn 1 two laps later, the AXR Cadillac dived down the inside and grabbed P1.

Again, the pair stayed tied together though and with 10mins to go, Taylor dived down the inside of the AXR machine at Turn 6, didn’t look far enough alongside and the pair collided. The #31 AXR car was fired off into the gravel, allowing the closing van der Zande to move the WTR Cadillac into the lead. Taylor resumed in second, with Acura teammate Dane Cameron – who had had a separate ‘off’ moments earlier – taking third.

Tristan Vautier brought the JDC Miller MotorSports Cadillac home fourth, with AXR classified fifth and last of the cars that had been on the lead lap.

Unbelievably, in the final hour Simon Trummer had to pit and go behind the wall with the PR1/Mathiasen Motorsports Oreca after dominating the whole race. Mikkel Jensen thus ran unopposed to the checkered flag in the Tower Motorsports by Starworks machine.

Augusto Farfus had held a 10-second lead before his final stop, but with less than 40mins to go, the lead BMW M8 was punted onto the grass at the final turn by a Prototype, and had to do a slow lap with his radiator full of grass debris and his left-front brake rotor on fire, obliging him to stop again to have the foreign matter removed.

That moved Makowiecki’s Porsche 911 RSR into the lead, 3.5sec ahead of Antonio Garcia's Corvette, with Laurens Vanthoor 7sec further back in the #912 Porsche. Farfus was right behind the second 911 however, and had Tommy Milner in the #4 Corvette right behind.

When the penultimate restart came with 7mins to go, Vanthoor collided with a GTD Lexus and went spinning off the track and into the wall.

So BMW got a consolation prize of a podium finish, and Milner, wrestling with a Corvette damaged much earlier in the race, came home fourth.

The #12 Lexus, with Townsend Bell at the wheel, had a tough final stint, clinging onto third ahead of the GRT Magnus Lamborghini Huracan of Andy Lally until Lally took advantage of the Prototype leaders coming through.

Bell’s disappointment got worse yet. Six seconds further back, Jan Heylen in the Wright Motorsports Porsche 911 GT3 R – who had an odd couple of very slow laps in the middle of the stint – passed Trent Hindman’s Heinricher Racing MSR Acura NSX, with Dennis Olsen in the Pfaff Motorsports Porsche following Heylen through.

But these Porsches caught up with and demoted Bell and then the #12 Lexus was fired into the wall by Vanthoor. That promoted Hindman into sixth, ahead of Bryan Sellers in the Paul Miller Racing Lamborghini.