Westbrook: Ford “on the back foot” going into Rolex 24 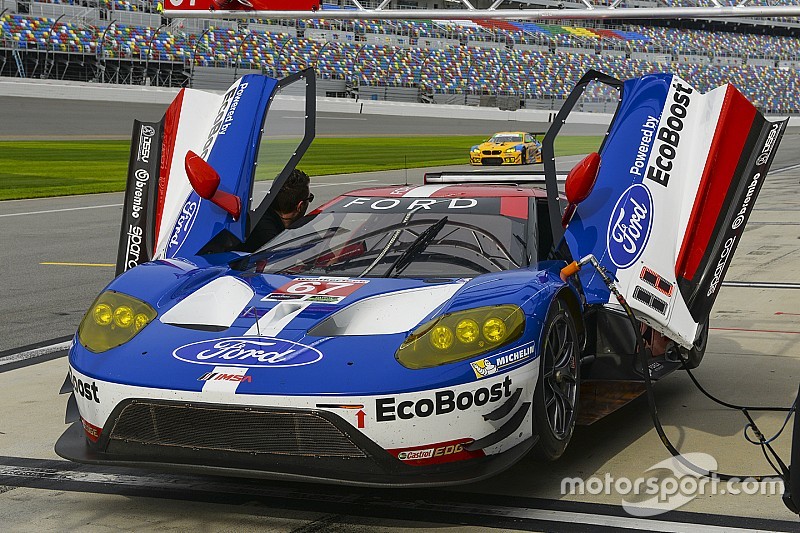 Richard Westbrook says Ford’s target for this weekend’s Rolex 24 at Daytona is to finish with as few problems as possible, rather than setting ambitious goals for GTLM honors.

Ford is returning as a factory team to international sportscar racing in the twice-around-the-clock American sportscar classic. It won the race 50 years ago with its iconic GT40 racer.

The new GT model echoes that glorious past but instant success is unlikely, according to Westbrook, who was 10th fastest in GTLM after Friday’s dry final practice session, driving the car he shares with Ryan Briscoe and Stefan Mucke.

“It’s a new chassis, new crew, new everything – something pops up and puts you on the back foot,” said Westbrook, who has previously been a contender for overall honors in the Daytona Prototype division.

“As a standalone event, you can’t treat this as a test. As soon as that green flag drops we’re racing to get to the front as soon as possible. Honestly, if we get to the finish without that many issues, that will be a dream.

“It’s too big a race to ignore, that’s our problem. I’d like to be able to say ‘we can treat this like a test’ – but it’s the Daytona 24, and with Ford having won before here, before they won Le Mans, it would be great to do that. But, honestly, we want to get to the finish with as few issues as possible – that has to be the goal.

“With our calendar, it’s not ideal for your first race to be 24 hours. It would’ve been a lot easier to go into a regular 2hr45m event. There are things like the internal lights at night and LEDs on the inside of the arches to do the brake changes… Little things like that, we’re having to prepare at the track because we haven’t had time before.”

Westbrook’s #67 chassis will start 31st overall, one place behind its sister car driven by Joey Hand, Dirk Muller and Sebastien Bourdais, after qualifying ninth and 10th in class.

“Qualifying was definitely not a reflection of where we are,” said Westbrook. “We’re probably not good enough to be at the very sharp end of the grid, but pace-wise we’re pretty comfortable actually.

“The car is really well balanced; it’s a very neutral car to drive. It doesn’t behave like other GTs I’ve driven – you’re very aware that the weight is in the middle of the car, where it should be. I wouldn’t go so far as to say it feels like a prototype, but it does feel very good.

“We haven’t had the chance to unlock the Ford's full potential, but it seems to have a big operating window for setup, which is really encouraging.”

Westbrook is buoyed by recent pre-event testing at Sebring, which is a renowned car-breaker of a track.

“We had a good test at Sebring," he remarked. "There were a few issues, so we didn’t get the full 12 hours in, but the issues that occurred were very small problems.

“The car does run very well, like a road car – you turn it on, and it just goes. But it’s getting everything ready, that’s the issue, that’s why I'd say we’re on the back foot. But it’s not like the car is breaking down, that’s not the problem.

"After this, there's two months to reset between now and Sebring. That gives us time to get back on the front foot.”

Bentley to test prototype ahead of future LMP2 entry