WEC stars baffled by lack of cautions at Daytona 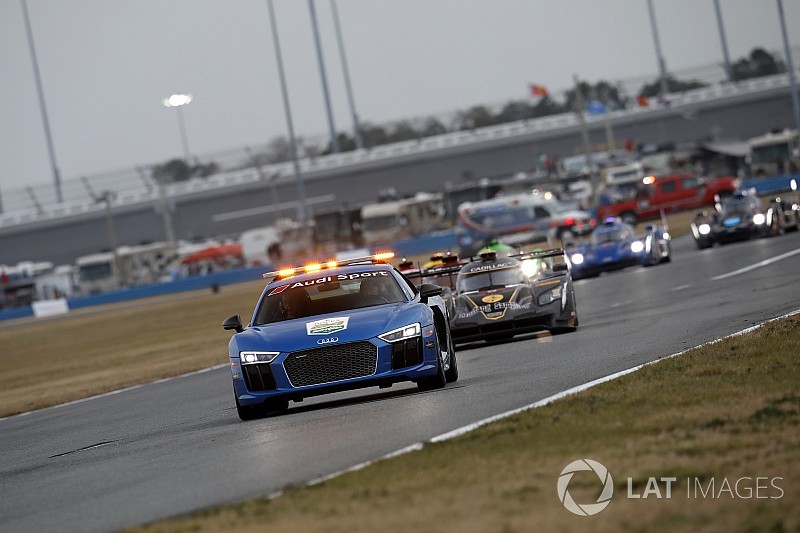 The 56th running of the American endurance classic featured just four caution periods – compared to the 21 seen in 2017 – making it the lowest tally since 1994.

Although the winning #5 Action Express Racing Cadillac DPi had a winning margin of one minute and 10 seconds over the sister #31 car, it led by as many as three laps before easing off the pace due to overheating concerns.

Mazda Team Joest driver Jarvis, whose #77 car failed to finish due to a recurring electrical issue, said he found the lack of yellow-flag running "amazing" and the attritional nature of the race a "shame".

Said Jarvis: "We always talk about Daytona as [being about] staying out of trouble, staying on the lead lap – and if you do have a problem, don't worry, because you get laps back.

"But it just hasn't happened. I've never seen a Daytona 24 with such big gaps [between the leading cars].

"It's a shame really because in the prototype class there hasn't been much of a race on, it's just survival to the finish.

"A lot of people have had tyre issues, us included, which has taken a lot of front-running cars out of the race.

"Considering the tyre issues and the weather, it's amazing we've only had four cautions. I remember races in the past where there were three in one hour!"

The Frenchman said the uninterrupted green flag running in the final six hours hampered the American squad's chances of beating the AXR Cadillacs to the win on its maiden outing with the Oreca.

"You didn't take any risks because you knew you might come back with the leaders with the yellows," he recalled. "But in the end it didn't come to us.

"I would say close to the end, when we saw the Cadillacs were having troubles, we pushed a little bit more to put some pressure on them.

"But before that, I remember on Friday we had a meeting – we were thinking [there would be] about 20 yellows.

"We tried to put some pressure on the guys [ahead] but it was a bit too late, they were a bit too far ahead."

Mazda cutting to one car has "positives and negatives"