WeatherTech Racing is coming into the 62nd running of the Mobil 1 Twelve Hours of Sebring as the defending champions in their category, making them one of the favorites for the Saturday, March 15 once-around-the-clock race.

In 2013, MacNeil and the Alex Job Racing Team (AJR) won the GTC Class. The University of Colorado at Boulder junior will be looking for his second Sebring win and AJR will be racing for their tenth 12-hour victory. 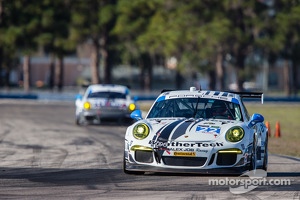 "Our test, a few weeks ago, went well," MacNeil said. "We were able to dial the car in and I think we have it handling well. I only did about 20 laps and had to head back to Colorado for school, but I was running decent times. In order for us to win Sebring again we must run a flat-out pace and have zero mistakes, which I know we can do. Alex and the team have won this race nine times and we hope to give him a tenth come Saturday."

"We had a tough test, but ended it really well at Sebring," Keen said. "We are still learning a lot of things about our new WeatherTech Porsche and that will continue. It's great to be on a team like AJR with Greg (Fordahl) engineering because we learn things so quickly and are always picking up fresh time with the car. To win, it starts with a team like AJR who has done it so many times. Both Cooper and I have a 12-hour win under our belt. The competition is big this year and the rules package didn't help us at Daytona, but they have made some changes, so we hope to not only be competitive but win. I have so many memories at Sebring. From when I first started racing in PCA (Porsche Club of America) to my first race with Alex in 2010 when we won in the GTC class--which is my best memory. I really just love being at the 12-hour with Alex because there is always so much confidence flowing around under the tent and it really goes out on the track with us."

For Frommenwiler this will be a weekend of firsts: first-time racing in America, first time at Sebring and first time behind the wheel of the new Porsche 911.

"I learned a lot from the test last month," Frommenwiler said. "The track is new for me and the Porsche 911 GT America is new to me as well. Sebring is a really difficult circuit to learn, very bumpy and it is hard to drive a clean lap. Sebring has a great history and will be a great atmosphere come race day. I have already heard a lot about the spectators at Sebring. The track kind of reminds me of Spa-Francorchamps. This track is also challenging, very fast and there is always a special atmosphere like at Sebring. I'm very excited to race at Sebring with my teammates Cooper and Leh and the Alex Job Racing team!"

Corvette Racing at Sebring: drive for 9th win in 12 hours