WeatherTech Racing finished the 62nd running of the Mobil 1 Twelve Hours of Sebring fourth in the GTD Class. The finish was not without controversy as Cooper MacNeil was mistakenly assessed an 80-second penalty that cost the team any chance at a victory.

The team started from the pole position after inheriting the front spot when the BMW, that won the pole on time yesterday, was sent to the back of field after IMSA officials deemed it out of spec. Leh Keen (Charleston, SC) had the wheel of the No. 22 WeatherTech Porsche for the start of the race. He managed to lead off-and-on throughout his stint. The 12-hour long Sebring classic witnessed 11 yellow flag caution periods and one red flag stoppage at 2:30 p.m. (only the fourth in the races 62 year history) totaling more than two hours of lost race time. 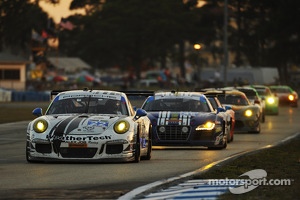 Throughout the race, the team had to manage the constant yellow periods with strategic pit stops to maintain track position. Drivers Cooper MacNeil (Hinsdale, Ill.) and Philipp Frommenwiler (Kreuzlingen, Swizerland) put in strong stints throughout the race to keep the WeatherTech Porsche in contention.

At approximately the eight-hour mark, IMSA Officials confused the WeatherTech Porsche with that of the factory GTLM Porsche and made MacNeil serve a stop-and-go plus 80-second penalty. Soon after, IMSA officials admitted their mistake, the team had to strategize their way back from one lap down. It took nearly an-hour-and-a-half to get back to the rear of the GTD pack on the lead lap, which they did at the end of the race, but couldn't get to the leaders. The penalty proved fatal to the team's chances at winning a record 10th Sebring 12 hour for Alex Job Racing.

"I was running really good all day," MacNeil said. "In my second stint, Greg Fordahl, our team engineer, radioed and asked if I had gotten in any altercations with the number 49 car. I answered with a no. He then told me that we were being assessed a penalty for contact with the 49 car. The officials made us come in and serve a stop-and-go plus 80-second penalty. We lost the race by 4.7 seconds and we had an 80-second penalty, so in my mind we won by 75 seconds. It really killed our race. They sent the wrong guy to the chair. I am not happy. The positives were that the team did a great job fighting our way back to fourth and the WeatherTech Porsche was great all day."

Keen had the finishing stint in the car.

"Once the penalty was assessed it was really the end of our race for the win," Keen said. "We had a great car all day. In the day time, we struggled a little with tire wear, but when the sun went down we were great. The team had a lot thrown at them the last three days and we kept bouncing back. In the race, we went down two laps at one point when we had the flat tire. We came back from that problem. We had the penalty mistake that put us down another lap and we came back from that issue. The team really worked hard all week. Alex Job and Greg Fordahl gave us a good car. It is never fun to finish fourth just off the podium. We deserved better today."

Frommenwiler was pleased with his performance, but wanted more.

"It was a really tough day for the team," Frommenwiler said. "We finished fourth. It was a pretty good finish, but we were just off the podium, which is not very satisfying. The team worked hard all week. I am happy with my stints in the car. My last stint I was able to lead a lot of laps and the car was really good. I had no real problems in the car and I really enjoyed my first race here at Sebring."

"It was an up and down day for the WeatherTech team," Job said. "Just over an hour in to the race, Leh had a flat which put us down a lap. We were able to get that back and led the class most of the afternoon. With all the yellows and the red flag when we would pit, it would send us down near 10th place. The part of the race that is hard to swallow is the mistaken penalty to Cooper eight hours into the event. That mistake by the officials cost us any chance at winning the race. It took away our track position and sent us into scramble mode to get back with the field. We did, but we couldn't get all the way back. It was too bad because the car and the drivers never missed a beat all day. The car didn't have a scratch on it. We just deserved more. Disappointing."

MOMO NGT Motorsport retires after incident during 12 Hours of Sebring