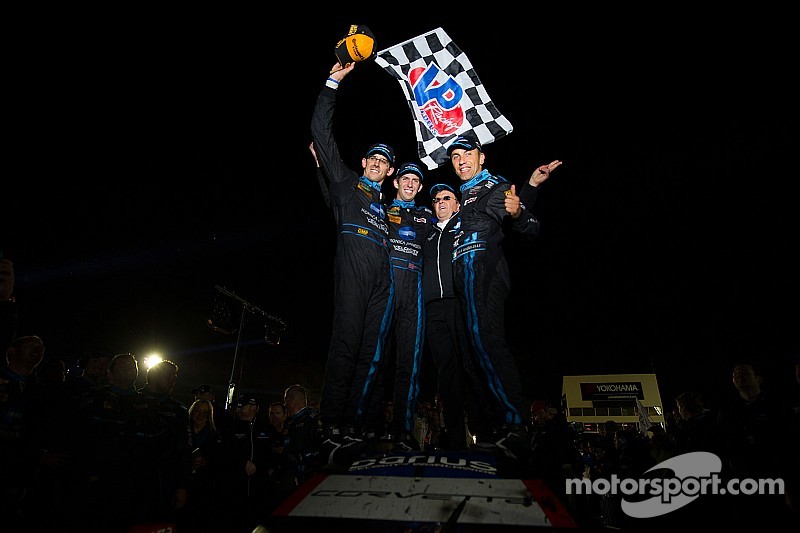 The victory margin was about 10 seconds over the number 5 Action Express Corvette DP, which had already wrapped up the championship. Third was the Ganassi Ford Ecoboost-Riley DP. And in its best race ever, the number 0 DeltaWing was fourth.

"We knew we had a winning car," Jordan Taylor said. "It's a great way to end the year."

"It's the best way to end a season," said Angelelli, who semi-retired when Ricky Taylor returned to the team, re-joining it for the longer races. For 2015, more of the same, Angelelli said, "and I'll think about 2016 as it gets closer." Their Corvette was in contention all day, with near-flawless driving, stops and strategy.

Winning the Prototype Challenge class was the number 8 Starworks car with John Martin, Alex Popow, Mirco Schultis and Renger van der Zande. For Popow, it is his second trip to Petit Le Mans, his second win. His season was cut short by a broken arm, "so it feels great to come back here and win again."

Tops in GT Le Mans for the second straight year was the number 17 Team Falken Porsche 911 RSR with Wolf Henzler, Bryan Sellers and Marco Holzer. For Sellers, this is his home track, "and we've done a lot of testing here, and I think that paid off. Local knowledge is a good thing."

And in GT Daytona, it was the number 48 Audi R8 LMS of Paul Miller Racing, with drivers Matt Bell, Chris Haase and Bryce Miller. It's the first win for Audi, and Bruce Miller said that while the car didn't have the outright speed some of the competitors had, they concentrated on other things like pit strategy and tire conservation to win. The team, owned by his father, plans to return in 2015, with Bryce saying that there is a lot of "upside" in the TUDOR Championship.

The race was rocketing toward the conclusion when Sean Rayhall, in the number 25 8Star Prototype Challenge car, ran off the track and took a hard hit into the retaining wall with just over 15 minutes left. He was taken by ambulance to the track medical center, but was evaluated and released. The race went green with a little over five minutes left after a very fast clean-up. That crash brought out the 13th caution, a record for the race. Alex Riberas crashed the number 23 GTD Team Seattle-Alex Job Porsche late in the race, and he was transported to the care center, evaluated and released.

Much of the drama was over early in the race as the Prototype championship was decided when the leading Action Express number 5 Chevrolet Corvette DP started the race, which was all it needed to gather the points it needed. The drivers’ championship went to Joao Barbosa and fast-qualifier Christian Fittipaldi, after they completed the required single 45-minute initial stints.

The two drivers are especially proud of one statistic: "We are the only team to complete every lap of every race in the season," Fittipaldi said. And while they came close to a win at Petit, "Hats off to the Taylor team," he said. "They were the class of the field today." The Action team had eight podium finishes in 11 races.

A few hours later the team also captured the Tequila Patrón North American Endurance Cup by leading the second segment at Saturday’s Petit Le Mans powered by Mazda at Road Atlanta. It paid $100,000. “This is the cherry on top of the cake,” said Barbosa. “We’ve had a great season already, and it’s great to cap it with one more championship.”

Similarly, the number 54 CORE Prototype Challenge team just had to start the race to win the championship. Colin Braun, Jon Bennett and James Gue went on to each drive the required two hours and 15 minutes to secure the drivers’ title, having won the team title at the last race.

In GT Le Mans, Kuno Wittmer's third-place finish in the number 91 Dodge Viper was enough to win him the driver's title. In an interesting strategy, the SRT tea split Wittmer and season-long co-driver Jonathan Bomarito between the two different cars, to give the team two shots at the championship. Wittmer was glad to win, "but I wish Jonathan was up here, too, because he deserves this as much as I do."

Turner Motorsports' number 94 BMW Z4, with Dane Cameron, Markus Paltlala and Chris Nygaard won the GT Daytona championship, with a fifth-place class finish. "The last 10 minutes was the longest in my life," said Cameron, who took the driver's championship. "You couldn't ask for more." Porsche won both the GTD and GTLM manufacturer's championship.

There were plenty of expensive crashes, but none that resulted in more than bumps and bruises for the driver. One of the worst hits came in the eighth hour when Spencer Pumpelly, in the number 45 Flying Lizard Audi R8 LMS, had a flat tire as he descended the hill onto the main straight, sending him hard into the tire wall with an impact that could be felt in the media center, which is right in front of the impact point. Pumpelly was OK, but the Audi and the tire wall were not.

Certainly the strangest crash occurred at around hour three during a yellow, when the number 3 Chevrolet Corvette GT-Le Mans car of Jan Magnussen, the number 62 Ferrari GTLM of Pierre Kaffer and the number 911 Porsche GTLM of Patrick Pilet got together in a chain-reaction incident at the end of pit road. All three cars were damaged, and Kaffer parked the Ferrari for a 50th-place finish.

Before halfway, the very fast number 42 OAK Ligier-Honda P2 retired with suspension damage after contact with the DeltaWing, which was able to continue. The OAK car was the fastest in night practice, and in the morning warm-up. And the number 9 Action Express Corvette DP car, sister to the championship-winning entry, retired after contact with the number 33 GTD Viper, winner of the last race at Circuit of the Americas, which also was through for the day.

It was a disappointing end of a tough season for the two Mazda Skyactiv P2 Prototypes. The number 07 retired in the first hour with overheating problems and was scored 51st and last, and the number 70 dropped out well past the halfway point with an oil pump failure. The team will be back next year, with some improved equipment.

It was a good day in general for the Prototype Challenge cars, with tough Oreca chassis and bulletproof Chevrolet spec V-8 engines. Jack Hawksworth, in the number 08 RSR car, laid down some laps just under one minute and 16 seconds, about a second and a half slower than the fastest Prototype cars. PC cars finished fifth through eighth overall.

Petit Le Mans: A long day's journey into night, and then some

$300,000 presented to champions of Patrón Endurance Cup at Road Atlanta