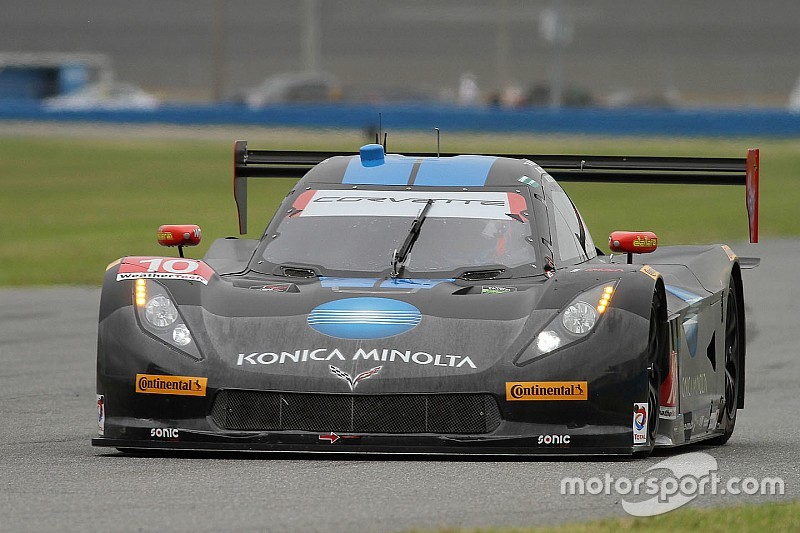 The team and driving trio worked through 197 trouble-free laps totaling 701.32 miles of testing over the three days.

Angelelli, who for the third year will join the Taylor brothers at the four endurance events that make up the Tequila Patron North American Endurance Cup, clocked the team’s fastest lap of the weekend in this morning’s penultimate session. It was a lap of 1 minute, 39.973 seconds at 128.195 mph around the 3.56-mile, 14-turn Daytona superspeedway road circuit that was fifth fastest in that sixth of seven sessions on the weekend.

in past years, there were five or six good cars while this year there are 10 cars that I think can win the race.

The team and driving trio worked through 197 trouble-free laps totaling 701.32 miles of testing over the three days and were classified seventh-fastest overall among the 54 car-and-driver combinations entered in this year’s renewal of the iconic 24-hour marathon set to take place three weekends hence – Jan. 30 and 31.

The WTR team and its fellow competitors will return to Daytona for Rolex 24 practice and qualifying beginning Jan. 28. FOX Sports and IMSA TV broadcast times will be announced at a later date.

Ricky Taylor, driver, No. 10 Konica Minolta Corvette DP for Wayne Taylor Racing:  “It was good. We had a long test plan and some interesting new things to try and I think we got through everything we wanted to. Basically, the car was good. It’s always hard to tell where you rank against everybody else at a test. But regardless, we could say our pace was good compared to years past. The car ran flawlessly, which is a testament to the fact the team always prepares a great car, so we have nothing to worry about there. Going into the race, we’re quite confident we’re going to have a good package.

All three of us (drivers) know each other and the rest of the team so well. It’s about the time we go and get a good result and win the race. This year, there seems to be more of a European feel because there are some European teams and some new P2 teams out there. Even though the car count has dropped a bit, I feel like the level of drivers and the level of team engineering has gone up where, in past years, there were five or six good cars while this year there are 10 cars that I think can win the race. So, that’s going to be exciting.”

Jordan Taylor, driver, No. 10 Konica Minolta Corvette DP for Wayne Taylor Racing:  “It was a good test. Every year we come to the Roar, it’s nice to be back at the track after a long offseason. All the guys did a lot of work coming into this weekend and had a good plan for the test. I think we got through everything we pretty much wanted to. We always come to Daytona with a pretty strong car and this year I think we can leave here feeling pretty happy with what we have. Having improved on what we had here last year, I think it’s the most comfortable car we’ve had here at this track. We’re all looking forward to it and it should be a good race.

There are a few new P2 teams here from Europe, and Mazda has upgraded its engine package – they seem to be a lot more competitive. So, I think when we come back here for the race weekend it’ll probably be the most competitive year we’ve had here in a lot of years. If you look at the timesheets from this weekend, it looks like there are at least seven or eight cars that can honestly win the race. So it’s definitely going to be one of the tougher years we’ve had at Daytona. But I’ve got all the faith in the world in our car and our guys and I’m just looking forward to getting started.”

Max Angelelli, driver, No. 10 Konica Minolta Corvette DP for Wayne Taylor Racing:  “It was a great weekend and we’re very happy. The car went really well and all the drivers did a good job. We’re very positive and looking forward to the race. The car is really good to drive – easy, it’s fast, it’s performing at all times of the day and night. We’re good on old tires, which is something we struggled with last year. Definitely looking forward to the race weekend. I’m not worried about the weather conditions. We proved that we’re good in any conditions. So, the drivers are happy, the team is happy. The mechanics tried and tested all kinds of stuff – driver changes, everything. We seem to be on a good path.”

Wayne Taylor, owner, No. 10 Konica Minolta Corvette DP for Wayne Taylor Racing:  “I think overall it was a really good test for us. We came in here understanding that you have to present your car in the same way you would bring it back for the race. So, the so-called sandbagging issue that everybody keeps talking about may be a problem for the people who are actually sandbagging this weekend. We certainly didn’t get caught up in that and instead spent most of our time with different stuff that we thought would help the car. We went through a load of testing items, all of which we got results with – some of them worked, some of them didn’t.

All three of the drivers are really quick, so we’ve got a good driver lineup. We’ve got a great team of guys. As far as this Roar compared to years past, we’ve got a real mixed bag of prototypes. You’ve got P2s with DPs, the Panoz car, and it’s clear the P2s and the Panoz are definitely quicker than the DPs in clear air, which is a little upsetting. But, it’ll come down to being there at the end of 24 hours and performing during the last hour. I’m really looking forward to it, as always.”

Panoz DeltaWing Racing: Progress made at the Roar Before The 24