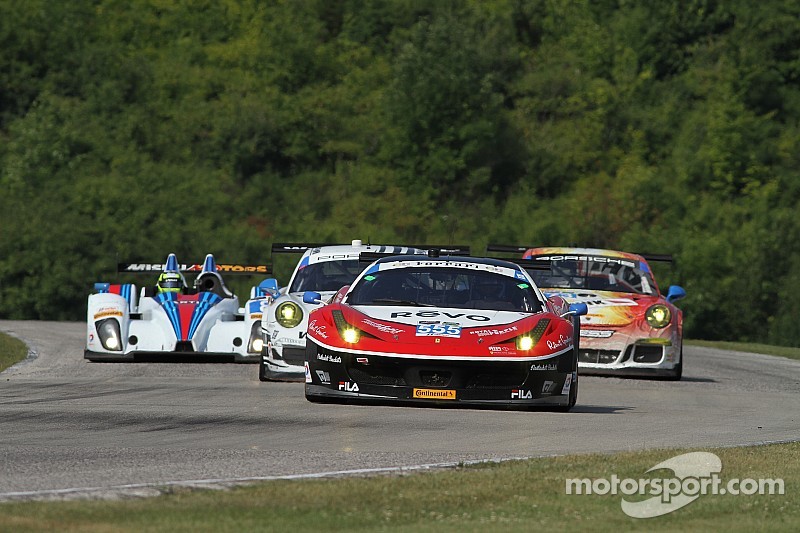 The two-hour, 45-minute race on Sunday will showcase the GTLM and GT Daytona classes running in the lone standalone event this season.

DANVILLE, Va. - The GT classes of the IMSA TUDOR United SportsCar Championship will be in the spotlight in this weekend’s Oak Tree Grand Prix at Virginia International Raceway. The two-hour, 45-minute race on Sunday (4 p.m. ET live, FOX Sports 1) will showcase the GT Le Mans (GTLM) and GT Daytona (GTD) classes running in the lone standalone event this season.

This gives the GTLM drivers a rare chance to race for an overall triumph.

“We don’t get this opportunity very often,” said Giancarlo Fisichella, GTLM winner at the most recent race at Road America in the No. 62 Risi Competizione Ferrari F458 Italia he co-drives with Pierre Kaffer.  “It will be quite a new feeling to race for overall victory, but of course it’s something we are all looking forward to.”

The Road America victory allowed Ferrari to join Porsche, Corvette and Dodge Viper SRT in the winner’s column this season. BMW is the lone manufacturer yet to win in the highly competitive GTLM class.

“It’s great to be able to race for the overall win,” said Bill Auberlen, who joins Andy Priaulx in the No. 55 BMW Team RLL BMW Z4 GTE. “I’m always motivated, but running as the lead class means there will be a little less traffic and a little more glory. When you win this race, all eyes are on you.”

Corvette Racing reeled off four consecutive victories earlier in the season, although Antonio Garcia and Jan Magnussen have not finished inside the top three in the last two races, shrinking their points lead to eight over No. 93 Dodge Viper SRT GTS-R co-drivers Jonathan Bomarito and Kuno Wittmer. On Friday, Garcia led the opening GTLM session in the No. 3 Corvette C7.R with a lap of 1:45.163 (111.464 mph).

Keen and MacNeil have not won yet this season, but have finished in the top five on five occasions. They have enjoyed previous success at Virginia International Raceway with an American Le Mans Series presented by Tequila Patrón GT Challenge class victory two years ago.

“Our championship situation is really exciting leading up to the last couple of races," Keen said. "With just three races left and three points out, we are in a good position. We come to VIR with a lot of momentum from Road America. Also, Cooper and I won there in 2012 and he was on the podium last year.”

GTD is more than a two-car race. Co-driving with Markus Palttala, Dane Cameron is coming off his third victory of the season in the No. 94 Turner Motorsport BMW Z4, and is now only 12 points behind the leaders with 208 points.

Coming off a third-place finish at Road America, Jan Heylen led opening GTD practice with a lap of 107.995 mph in the No. 58 Snow Racing Porsche 911 GT America co-driven by Madison Snow.

The weekend also features a new format for the Prototype Challenge (PC) class, running in a pair of 45-minute races. Each team’s bronze or silver (amateur) driver will qualify on Saturday and then race at 5:25 p.m. ET. The teams have the option of running a gold or platinum (pro) driver in the second segment at 10:45 a.m. on Sunday, with the overall standings set by combined points from the two sprints.

Colin Braun, a four-time winner and the current PC points leader, led the opening session in the No. 54 CORE autosport ORECA FLM09 co-driven by Jon Bennett with a lap of 116.185 mph.

The next race for all four TUDOR Championship classes will be the Lone Star Le Mans at Austin’s Circuit of The Americas on Saturday, Sept. 20.

No. 3 Corvette and No. 911 Porsche suffer heavy damage at VIR