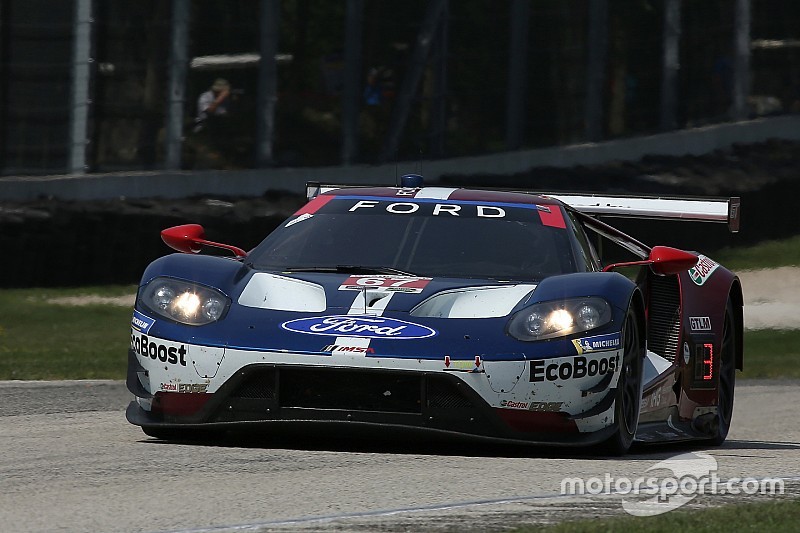 Ford’s Richard Westbrook set the pace in the opening practice session for the GT-only round of the IMSA WeatherTech SportsCar Championship at Virginia International Raceway.

Westbrook set the quickest time on the very last lap of the session, ahead of Porsche’s Earl Bamber and the sister Ford of Joey Hand.

The session was red flagged after just a handful of laps to retrieve the GT Daytona championship-leading Lamborghini Huracan of Bryan Sellars, which laid an oil slick before pulling off between Turns 11 & 12.

Sellars had set the pace in GTD at the time, at 1m45.565s, but the Paul Miller Racing car now requires a new engine before the second session.

Corvette’s Jan Magnussen was the first to break the 1m43s barrier, setting 1m42.951s with a quarter of the session remaining. Earl Bamber eclipsed it by a margin though, with a lap of 1m42.761s.

Hand (in for Muller in #66) had set the second fastest lap in the closing stages with 1m42.793s – just 0.032s shy of Bamber’s fastest lap at the time. But, having taken over from Briscoe, then Westbrook bested them all with a 1m42.627s, over a tenth clear of Bamber and Hand.

Magnussen stayed fourth, with Patrick Pilet fifth in the second Porsche, ahead of the quickest BMW of Alexander Sims.

The sidelined Sellars didn’t keep his top spot in GTD, with Jack Hawksworth’s Lexus topping the timesheets with 1m48.596s, ahead of Jeroen Bleekemolen’s Mercedes.

However, Bleekemolen’s teammate Ben Keating was forced out of the session with five minutes remaining. Andy Lally was third quickest in the Magnus Audi, ahead of Sellars.