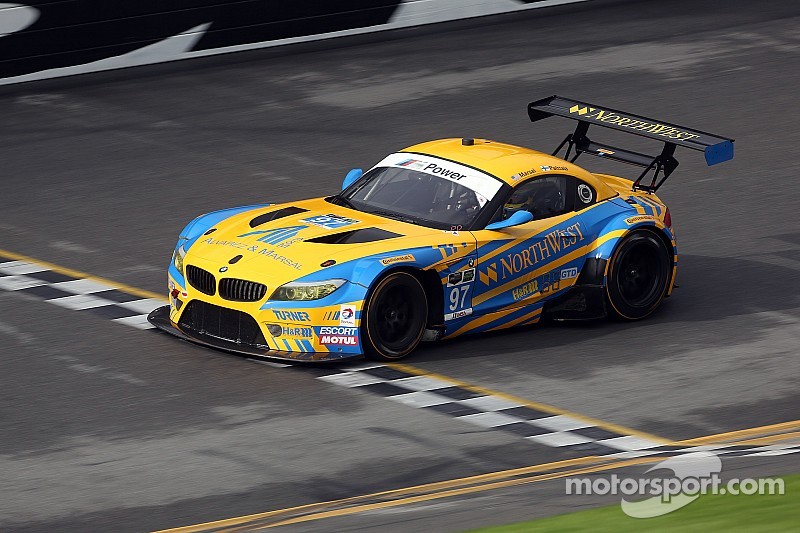 Amesbury, MA. – January 12th, 2015 -- With just under two weeks until the 53rd running of the Rolex 24 at Daytona, Turner Motorsport secures an impressive four-driver lineup for the team’s fifth consecutive running in the legendary North American endurance event, kicking off the Patron North American Endurance Cup.

As with previous years, The Turner lineup will include some familiar faces from around the world including former BMW Motorsport DTM driver and three –time WTC Champion Andy Priaulx (GG) as well BMW legend Boris Said (US) Priaulx and Said will share driving duties with Turner endurance veterans Markus Palttala (FI) and Michael Marsal (US) who will go on to compete in the entire 2015 TUDOR United SportsCar Championship season.

“It is fantastic to be a part of such an impressive Rolex 24 team. I’m really happy to have Boris (Said) and Andy (Priaulx) back on the team for Daytona,” commented Michael Marsal. “ With the combined experience in this line up, there will be no guess work or uncertainty with rules, procedures and how the team operates so that combined with the rock solid BMW platform and a great strategy we have all the perfect ingredients for a strong performance to kick off 2015.”

Daytona is an incredibly hard race to finish, never mind win but I believe we have the ingredients for a strong performance in our No. 97 BMW Z4.

Boris Said, one of the most versatile racers in the world, joins the Turner Motorsport team for the first time since a GS class appearance at Sebring last season and his 2013 full season paired up with Michael Marsal in the Turner No. 97 GS class M3. Said is a two-time back-to-back winner of the Rolex 24 at Daytona, appearing for his fourth time with Turner Motorsport.

“I am so excited to be back with Turner Motorsport for the my fourth appearance in the blue and yellow BMWs,” explained Boris Said. “I have raced on and off for Turner over the years and in my opinion they are one of the best sports car teams in the world. Now that I am a BMW dealer myself and I am a proud customer of Turner it makes it even more special to be a part of Will’s team.”

As a BMW Works driver, Andy Priaulx was a member of BMW Motorsport’s Intercontinental Le Mans Cup team co-driving the BMW M3 GT to a win at the 12 Hours of Sebring and a third place finish at the 24 Hours of Le Mans as well as a winner in the Nurburgring 24 hour. In 2012 Priaulx joined BMW Motorsport’s DTM effort for two full seasons in the Crowne Plaza Hotels BMW M3 DTM. Most recently Priaulx co-drove the No. 55 RLL Team BMW Z4 GTLM with Bill Auberlen in 2014.

“Daytona is an incredibly hard race to finish, never mind win but I believe we have the ingredients for a strong performance in our No. 97 BMW Z4. Despite the inherent lack of straightaway speed in our Z4 compared to the competition last year, we managed a seventh place finish at the end,” explained Will Turner. “Last season was hugely successful so I am confident that our sixth Rolex 24 will be one to remember. We have learned a lot over the years, communication and focus are key to be around for the finish.”

The 53rd running of the Rolex 24 Hour at Daytona will take the green flag at 2:30 on Saturday January 24th televised LIVE from Daytona International Speedway in Daytona Beach Florida. Be sure to tune into Fox.

Marsal has continued honing his skills, delivering multiple podium finishes in the ultra-competitive Continental Tire SportsCar Challenge driving the No. 97 BMW M3, including a 2014 season-best 2nd place at Circuit of The Americas with co-driver Tom Kimber Smith. For the 2015 season, Marsal will move from the Continental Tire SportsCar Challenege to the GTD-class of the Tudor United SportsCar Championship set to kick off the season in the Rolex 24 hour at Daytona.. This will be Marsal’s first full-season in the equally competitive GTD-class of the TUSSC in the Turner Z4 GTD machine along with Markus Palttala.

Said has done it all. He is a two-time, back-to-back winner of the 24 Hours of Daytona, in 1997 and 1998 respectively. In 2005, he was the overall winner of the Nurburgring 24 Hours, the first American to do so. The same year Said joined Turner Motorsport, driving in select events for the blue and yellow BMWs. From 2010 to 2013 Said co-piloted the Turner M3 GT entry in the 24 Hours of Daytona. He also drove the No. 97 M3 GS with Michael Marsal for the full 2012 Continental Tire Series season.

Palttala is no stranger to BMW with several full seasons of the Blancpain Endurance Series and the 2014 TUDOR United SportsCar Championship driving the BMW Z4. The Finnish driver has won three 24 Hour races including the 24 Hour of Spa as well as the 1000km of Spa. Palttala has started in over thirty 24 Hour starts including Le Mans and the Nurburgring, all driving a BMW. Palttala joins the Turner Motorsport team for his second consecutive season after winning the TUDOR United SportsCar Championship with Dance Cameron in 2014. Palttala, the "Flying Fin" is back in the United States to put the blue and yellow Turner BMW on top of the podium.

As three time World Touring Car Champion, Priaulx has seen much success in Endurance racing with a win in the Nurburgring 24 Hour, the Sebring 12 Hour as well as a podium at the Le Mans 24 Hour race. In 2012 Priaulx joined the BMW DTM family in the No. 15 Crowne Plaza BMW M3, finishing sixth in the team championship with teammate Augusto Farfus, helping to secure the manufacturers’ championship for BMW. In 2014 Priaulx once again was behind the wheel of a factory-backed BMW, this time in the No. 55 Z4 GTLM in the Tudor United SportsCar Series.

Roar Before the 24: successful tests for both Ligier JS P2 cars

Risi Competizione team successfully complete their set up at Daytona