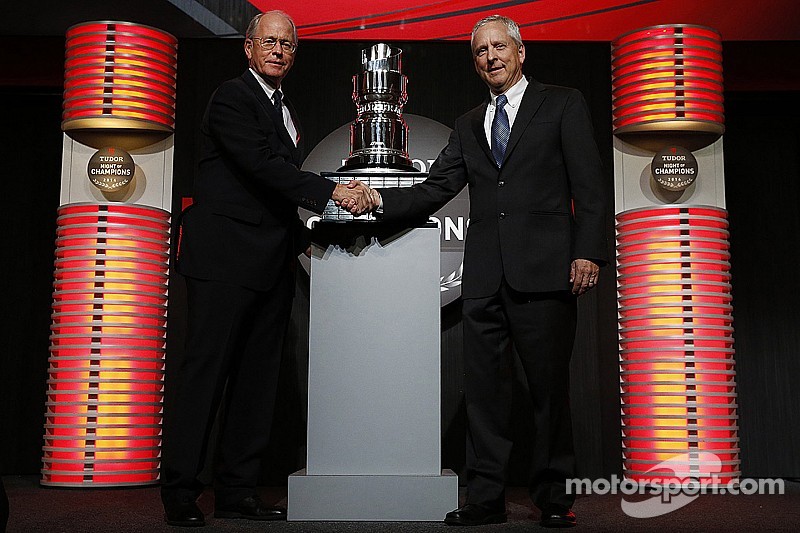 NEW YORK – The International Motor Sports Association (IMSA) paid tribute to its past, honored the present and proudly looked forward to the future at Monday’s inaugural TUDOR Night of Champions at Cipriani 42nd Street in midtown Manhattan.

“By nearly all measures, the 2014 TUDOR Championship was a success,” said IMSA President and Chief Operating Officer, Scott Atherton. “We had full fields of world-class race cars throughout the season. Competition on the racetrack was close and got even closer as the season progressed. … This is a testament to the quality of our race teams, drivers and manufacturers, that so many different combinations could produce victories.

“Having all of North America’s most historic events and prestigious sports car racing venues on one calendar paid immediate dividends, and the fact that we announced our 2015 schedule two months ago shows tremendous stability as we look to the future. We made significant strides on our television product this season, and closed out the year with tremendous momentum.”

Porsche also was presented with the IMSA Green Challenge Award by Reuben Sarkar, Deputy Assistant Secretary for Transportation from the US Department of Energy.

The winners of the Tequila Patrón North American Endurance Cup – crowned at the season-ending Petit Le Mans powered by Mazda at Road Atlanta – were officially recognized.

Action Express Racing with drivers Barbosa and Fittipaldi (P); Porsche North America with Michael Christensen and Patrick Long (GTLM); CORE autosport with Braun, Bennett and James Gue (PC); and AIM Autosport with Bill Sweedler and Townsend Bell (GTD) were champions of the unique standalone competition  that encompassed the four endurance races on the TUDOR Championship, awarding points at different segments of the Rolex 24 At Daytona, Mobil 1 Twelve Hours of Sebring Fueled by Fresh From Florida, Sahlen’s Six Hours of The Glen and Petit Le Mans powered by Mazda.

The VP Fuels Front Runner Award, presented to the team leading the most laps during the second half of the season, went to Turner Motorsport (112 laps).

John Ondrasik, better known by his stage name Five For Fighting was the musical guest. The piano-based rocker performed hit songs, “Chances”, “100 Years” and “What If.”

The 2015 season for the TUDOR United SportsCar Championship kicks off in less than 90 days with the annual Roar Before the Rolex test, Jan. 9-11 at Daytona International Speedway.

The good news: Kuno Wittmer is a champion. The bad news: He's unemployed.