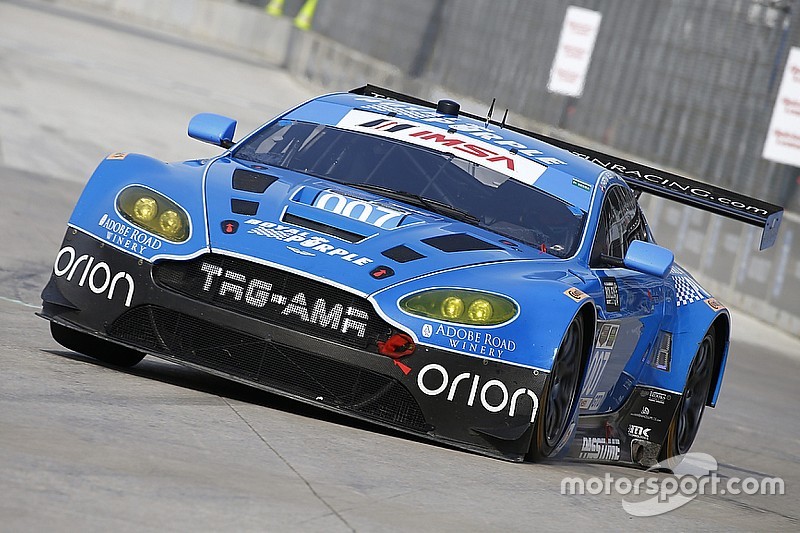 Petaluma, CA (June 24th, 2015) - Back from France and ready to get back behind the wheel, Christina Nielsen and the entire TRG-AMR 007 team are headed to Watkins Glen, New York for the next round of IMSA TUDOR United Sportscar Championship and Patron North American Endurance Cup competition.

Currently 2nd in the IMSA TUDOR Championship, Nielsen and the 007 team have been incredibly competitive all season so far, reeling in a number of pole positions, fast laps, and podium finishes. This round of competition marks the 3rd round of the NAEC, the final long race before the season-ending Petit Le Mans.

Being teamed up with Christina will be a first for me, but tracking her progress over the year we definitely have a shot at the victory.

With the weekend being split between IMSA at the Glen and Pirelli World Challenge at Road America, Nielsen and TRG-AMR CEO Kevin Buckler made the decision to bring in some extra firepower for this event, in the form of 2014 IMSA TUDOR GTLM Champion and 2015 Rolex 24 Hours at Daytona winner Kuno Wittmer. Wittmer, a Dodge factory driver for over the past five years, has been racing since 1998 when he first competed in the Jim Russell International Competition.

TRG has a long and successful lineage at the Glen, posting the only ever 1-2 finish campaigning Daytona Prototypes in 2005, as well as having a total of two additional GT class wins in the Six Hour race, 2 wins in the fall GT race and two wins in the Continental Tire SportsCar Challenge races held here. TRG Motorsports also competed at Watkins Glen in the NASCAR Sprint Cup series three years in a row, fighting head-to-head with the best of the best in NASCAR's top-tier of competition. While historically impressive, the team knows it has a big challenge with the incredibly competitive GTD class and this demanding circuit.

TRG-AMR Team Driver, Kuno Wittmer: "I am very pleased to be joining the TRG-AMR squad in their Aston Martin GTD car, and also blessed to be back in a GT car in the TUDOR United SportsCar Championship. They have shown great pace over the year and the team is always among the sharpest in the paddock. Being teamed up with Christina will be a first for me, but tracking her progress over the year we definitely have a shot at the victory. She stands out as a true performer and is a quick learner. To be quick and successful at Watkins Glen is never an easy task.

The track has a lot of history to it and it is for sure one of my favorites. I believe the Aston will favor many parts of the circuit as it will be very important to lock down our qualify and race set-ups early in the practice days. Given it is a six hour event, many things can happen! Our goal is stay clean, keep the pace, and we will be there in the end. I have all the faith in my teammate and the TRG-AMR team. Another plan to cover this weekend will be to try and win this difficult race, scoring more points in the Tequila Patron North-American Endurance cup. I know Christina is sitting well in the rankings, a win here will help lift her even further."

TRG-AMR CEO Kevin Buckler: “We’re really excited to have Kuno on board with us for this race (and maybe some more) - he’s a great driver with a lot of good history in front-engine, rear-wheel drive cars with tons of horsepower. He brings with him some incredible pedigree and I know the team will put a car on the track that he can compete up front with.

We all had a really good time at Le Mans - Christina drove extremely well and continued to learn how the GT3 performs on really high-speed, flowing tracks like Le Mans and Watkins Glen. The Glen is a very very challenging track and I am looking forward to seeing how Christina and Kuno perform this weekend. We have an incredible history of success at this track and we are coming here for one purpose - To Win.”