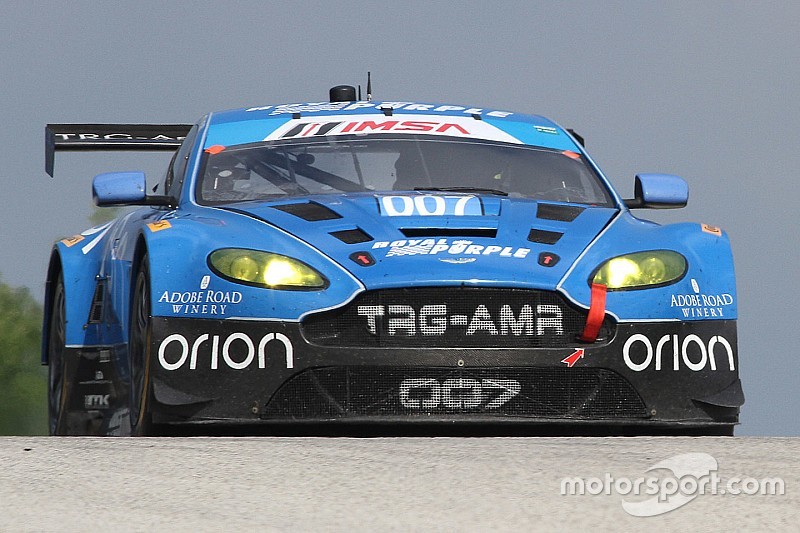 Elkhart Lake, WI - For the first time in North American history, an Aston Martin race car sits on top of a major Sportscar racing series in both the Team and Drivers Championships.

Christina has been solid throughout the season and with the addition of Kuno Wittmer at the midpoint of the championship, it is paying off.

The two-hour, forty minute race saw Nielsen and Wittmer lead the GTD class at multiple points throughout the race and finishing ahead of the pole sitting Porsche 911. A key objective for this weekend was to finish ahead of the number 48 Audi R8 to take over the points lead and that is precisely what the team did with a stellar performance by the entire TRG-Aston Martin Racing squad.

The race at Road America is also a home race for sponsors Orion Energy Systems and LaSalle Solutions that were on hand to witness the fantastic finish by the 007 Aston Martin V12 Vantage and Christina Nielsen and the Team’s jump into the overall points lead in the GTD class. The strong performance couldn’t have been better timed as Orion Energy Systems hosted over 200 guests trackside with TRG-Aston Martin Racing.

The duo have clicked since driving together at Watkins Glen in June and are coming off a podium finish at Lime Rock Park just two weeks ago. Today’s 2nd place result catapults Nielsen and the TRG-AMR team into first place in the IMSA TUDOR GTD Championship.

With limited support, the team has done something truly remarkable in placing itself, its driver and the beautiful and potent Aston Martin race car on top of the other teams and much larger manufacturers, a feat that seems to be a recurring theme with TRG over the last 20+ years.

TRG-AMR CEO Kevin Buckler: “We have known all season we have the car, driver combination and the team to win. Christina has been solid throughout the season and with the addition of Kuno Wittmer at the midpoint of the championship, it is paying off. Christina did an incredible job of qualifying the 007 V12 Vantage P3 yesterday with an amazing lap of a 2:09. She backed it up by driving a fast, super heads-up race today and allowing Kuno to finish it off in P2.

We had the win in our sites but the very powerful (and very thirsty) V-12 combined with the series rules, caused us to take an extra stop for precaution. I simply could not be more proud of my drivers, crew, and entire team. What really makes this performance special is being able to take over the GTD class points lead with three of our key sponsors at the track in Orion Energy Systems, LaSalle Solutions and Royal Purple/Calumet all present.

We could not do it without them. We feel confident that we have a strong program for the last three races of the season at VIR, COTA and Road Atlanta. We want to enjoy our points lead this weekend with all of the festivities at Pebble Beach but get back to work to focus on extending that lead going into VIR on the August 21-23 weekend."