© 2021 Motorsport Network. All rights reserved.
TV Tickets Fashion Giorgio Piola Jobs
Previous / Championship defense for Ferrari begins at the Roar before the 24 Next / BAR1 Motorsports builds momemtum at the Roar Before the 24
IMSA Preview

The 2014 Continental Tire GS class kicked off 2014 at the Roar before the 24 test. TRG-AMR North America arrived with two Aston Martin Vantage GT4 GS class vehicles for the test. The 07 and 09 Vantage GT4 machines have shown strong pace and will continue to build on the competitive runs that they saw at the end of last season. For 2014 TRG-AMR is aiming its sights on a championship in this most competitive of classes.

In the 07, Max Riddle and Kris Wilson will campaign the Vantage GT4 full time with TRG-AMR North America. This debut weekend in the car was a tremendous opportunity to begin their assault on the championship. Both Riddle and Wilson spent the entire weekend getting the setup to work for both drivers and getting acclimated to their brand-new racecar and team. The hard work paid off as the 07 was a top ten car in the GS class throughout the weekend. 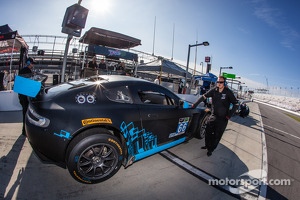 Joel Janco and James Davison have teamed in the 09 Vantage GT4 for Daytona. Davison, who will compete in the GTD class in the 007 GT3 has been apart of the TRG-AMR program since last fall. He spent considerable time behind the wheel of the GS class car in late 2013 events and off season tests. This seat time has allowed James to become very comfortable and his pace is evident. Janco and Davison have paired together in other road racing events in the past. For Janco the opportunity to drive the 09 with Davison was too good to pass up. Janco got into a comfortable pace quickly and had a great three days in testing. As a result, the 09 Vantage GT4 was a top ten car throughout the weekend as well.

With the test complete, the team will return to Petaluma, CA and prepare for the Daytona event. There are some parts and pieces to replace after three intensive days of testing. However, the TRG-AMR team will be prepared to compete for victory.

"This opportunity for me and my career is amazing. I had a really thorough test and enjoyed the time throughout the weekend. It is a real honor to come to Daytona and drive for TRG-AMR in the Aston Martin Vantage GT4. I feel like we have made a lot of progress for the race. We will be a contender. Kevin arranged for me to test the GTD car and that was awesome. Overall, this was a great place to start 2014!"

“The Aston Martin is such an awesome car! It was a blast to drive all week and I can’t wait for the race with my team mate James Davison. The team is tremendous and I feel really good about the race and our chances of being competitive.”

“We are very proud to be bringing these two strong cars and four strong drivers to our opening round here at Daytona. The team we have put together here is championship caliber all the way and I was very proud of our drivers performance this weekend. It’s 3000 miles across the country and the trucks are rolling. Everybody will be flat out for a week here at the shop and then we had right back to Daytona. It is an honor to be representing Aston Martin this year in the Continental Challenge series and we will do our best in every way to continue to positively develop the programs and to look towards running for a championship in 2014.”

Championship defense for Ferrari begins at the Roar before the 24