Our number 11 moment is the merger of Grand-Am and the American Le Mans Series, and how their cars took off soon after the first test.

While it was known since September of last year that IMSA and Grand-Am would be merging, effectively bringing the American Le Mans Series and Grand American Rolex Series together, this year has seen the series’ identity and brand take shape, as well as the technical regulations tested and certified.

January 8 saw the first draft of the class structure released, then on March 14, the series debuted with its title and logo.

Then, in November it made its first series tests at Sebring and Daytona that saw all the cars, from Daytona Prototypes to the GT Daytona class running together on track.

But something wasn’t right. 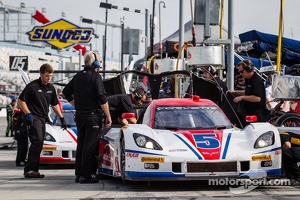 During the first day of Daytona testing, two Daytona Prototypes became airborne after tire failures. IMSA shut down practice for those cars and work began on finding out the causes and fixing them before the January opening race at that same track.

Luckily, no one was injured in these high-speed, high-altitude accidents.

The series is still working on all the final competition rules for the series. This fact alone has much of the teams upset, but with the recent events at Daytona, it is important for them to get it right.

There will be a season opening TUDOR United SportsCar Championship race at the 24 Hours of Daytona. How much preparation these teams will really have is still up in the air.

“The target for the last couple of weeks has been working on the DP cars and getting the Daytona setup for those guys,” Scott Elkins, IMSA Technical Chief said.

“We’re going to have more examples of P2 cars at the Roar. That will help us gather more data. We’ll take that and we’ll make some final decisions on the P2/DP balance after the Roar, probably.”

Dr. Jim Norman to co-drive with Craig Stanton for Park Place Motorsports in 2014