To fine, or not to fine?

Should penalties be handed out for off track activity?

What is your opinion about the penalties levied to Marcos Ambrose and Casey Mears after their post race altercation at Richmond?

The fine reopens a can of worms for me that was closed and locked shut a couple of years ago with the “boys have at it” rule.

I hate when any sanctioning body steps in and thinks it needs to fine a driver their own money, or this arbitrary probation thing? Come on NASCAR…does the driver have to call into their probation officer Mike Helton every week to discuss their actions and attitude? I highly doubt it.

Next. When to get involved?

Personally, the only time the sanctioning body should get involved is when the actions that require punishment are completed using the race car, or taking place on the race track.

There you have it folks. NASCAR, my resume is in the mail.

So here it is again. The only time the sanctioning body should get involved is when the actions that require punishment are completed using the race car, or taking place on the race track.

This weekend. I say that NASCAR stays out of the Mears/Ambrose tussle, monetarily. I think as a sanctioning body, they have to protect their product, so a phone call to both drivers ensuring they are both ok is good. That fight will bring more viewers to the Talladega race than all the wrecking compilations you will find on the internet combined. It’s good for the sport (in a way). Just ask Donnie Allison and Cale Yarborough.

What else have we got for examples to run by my theory? Kyle Busch and Ron Hornaday in 2011 at Charlotte. That situation is different. Everything took place on track. Busch dumped Hornaday, who already had a wrecked truck at very high speed. Only 15 laps in…with Hornaday one race away from potentially winning a title.

That incident, from my perspective as new NASCAR President would be to park the KBM team at the next race and then get an approximate cost of the fixable damage to the Hornaday truck and round it up for a fine. The fine money then goes down into the NASCAR Home Tracks program, or whatever driver development programs there are these days.

Again, that Busch incident certainly got the attention of the whole world, which is good for the sport (in a way).

I feel that NASCAR got the Michael Waltrip Racing penalty wrong. While NASCAR claims they have no evidence that can 100 per cent place the guilt on Clint Bowyer for his spin. 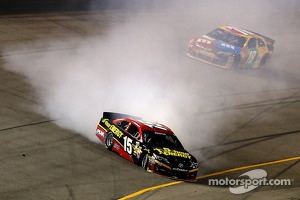 The amount of laptops in the garage area tells me that there are a few Toyota engine guys who know that Clint Bowyer spun that car.

Now, the team also called Brian Vickers down pit lane before the restart to give Martin Truex the correct amount of points to make the chase…

The Michael Waltrip Racing TEAM made a decision for the TEAM to help the TEAM gain positions. They did it by calling their car off the track, down pit lane. I don’t see a single thing wrong with that. There is nothing unsafe about that. Michael Waltrip didn’t build a team so he could not have one team benefit from another, and visa versa.

Bowyer, on the other hand spun his car out, on purpose. If there is anyone that is punished, it is him. It is unsafe to spin your car on track, nonetheless deliberately.

One more. And its not NASCAR!

Recently, IMSA has been under fire for some bad calls in its first couple races. Now IndyCar is taking flack for not enough action after an incident filled event at Long Beach.

Sebring, 2014. IMSA penalizes the wrong car for avoidable contact. Not only is it the wrong car, but in the wrong class. And the car is still in contention for a win.

Avoidable contact is a tough one. I think avoidable contact should be used only in blocking (where the lead car makes a second move in reaction to the second car), and completely insane dive bombs. Otherwise, the professional driver at the wheel thought he was making a move that would gain him a position, and maybe let them win the race. Don’t tell a race car driver he was wrong with a penalty…the damage on the front of the car and his shame penalizes him enough.

Essentially, impatience got the better of the IMSA officials. If you can’t make out which car it is, or there is any doubt, the penalty does not have to be issued that race. Why not leave that one, let the soon-to-be penalized car go on to win, and save the penalty for the next round, grid positions, ala Formula One.

Will Power punts Simon Pagenaud at Long Beach. No action from IndyCar. This was completely correct. I have seen it from both their inboards. I was also photographing the incident from the outside of the turn. I was there because there was about to be a restart, and I know it is a bad place to pass. Then bam! There is a car in the tires.

Power knows he screwed up. He doesnt need a drive through penalty, or a $10,000 fine to know this. He also knows then next time he has to get by Pagenaud, it might be a bit tougher.

Apparently Power and Pagenaud remained friends from their Champ Car days, and have since cancelled a vacation they planned to take together.

So what I am saying is sanctioning bodies need to relax. The sky will not fall because light contact between cars spun someone during a 12 hour race, and you didnt give a penalty. So driver A punched driver B in the face? He didnt hit him with a stock car, or smack him with a hammer.

You will know when to take proper action, it will be really evident… (Romain Grosjean, Matteo Malucceli.)