Full-season co-drivers Dr. Jim Norman and Craig Stanton will be joined at this year’s season-opening Rolex 24 At Daytona by Norbert Siedler and Factory Porsche driver Timo Bernhard in the No. 71 Park Place Motorsports Porsche 911 GT America. 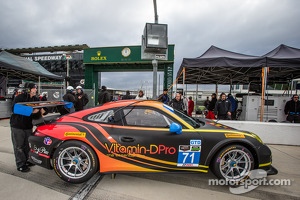 Bernhard’s established career includes several major endurance race wins. A two-time Rolex 24 At Daytona class winner (2002, 2003), Bernhard also has five victories in the 24 Hours of Nürburgring and two wins and two runner-up finishes at the 24 Hours of Le Mans. Additionally, the Homburg, Germany, native won his respective class division three times in the American Le Mans Series, taking top honors in 2004, 2007 and 2008. The addition of Bernhard alone instantly makes the No. 71 a podium threat in the day-long race.

“It is a great honor for me to share a car with Timo,” Norman said. “His talents are legendary and we will take this opportunity to learn from him. Adding Timo to our already great Porsche driver lineup should solidify our car as one of the teams to watch. We are going to be good!”

Also joining the team for the Rolex 24 is Austrian sports car veteran Norbert Siedler. Siedler participated in his first Rolex 24 At Daytona a year ago and has since 2008 driven in the Porsche Supercup Series.

Both the No. 71 and the Park Place Motorsports sister No. 73 Vess Energy Porsche 911 GT America will be managed on the technical side by accomplished motorsports engineer John Horton.

"We are very excited about our driver lineup which was very carefully assembled to bring the Daytona win back to Porsche where it has been for so many years," said Horton, who is also a Park Place Motorsports team principal. “Timo is the final piece of that puzzle, and we are very fortunate to have him leading the way. A lot of credit goes to Brock Wagner for putting this team together, including hand-picked mechanics and everything else that it takes to win here at Daytona.”

Park Place Motorsports is currently completing Saturday testing at the Roar Before the Rolex 24 At Daytona with two final practice sessions set to close the weekend on Sunday.