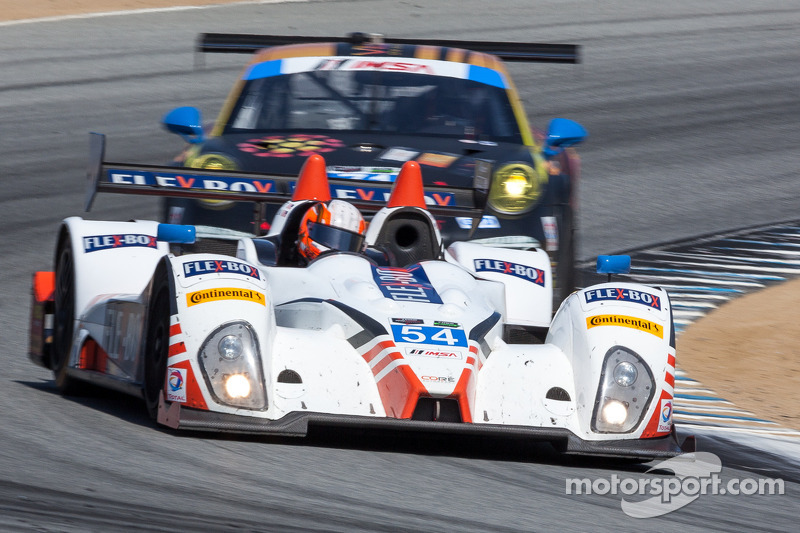 Colin Braun to give CORE autosport its third TUDOR United SportsCar Championship win of the season.

KANSAS CITY, Kan. (June 8, 2014) – In a unique format at Kansas Speedway that featured two, 45-minute race segments, a clean run for Jon Bennett combined with a dominating performance by Colin Braun to give CORE autosport its third TUDOR United SportsCar Championship win of the season.

The latest round of the TUDOR Championship gave the Prototype Challenge class a staring role at Kansas Speedway and a format unlike anything the category has attempted before. The PC cars combined with the IMSA Prototype Lites series for a race divided into two 45-minute segments. As the bronze-ranked driver, Bennett was required to start the first segment and Braun the second segment.

Bennett qualified the car fifth on Friday evening with no track time prior to the 15-minute qualifying session. When the green flag dropped for the first race segment, Bennett had the throttle timed perfectly and jumped up to third. A full course-yellow was issued shortly after the start, but Bennett’s restart was not as precise this time and the No. 54 ORECA FLM09 dropped to seventh.

He circulated the 2.37-mile, 8-turn road course/oval in seventh for most of the race until the third and final full-course caution was issued, packing the field back up. The race went back to green and with 13 minutes remaining and Bennett advanced to sixth. He picked up one more spot, moving to fifth when a car in the lead pack spun.

Crossing the finish line in fifth meant that co-driver Braun would start the second race segment in fifth at 10:15 pm local time.

In part two, Braun wasted no time moving the No. 54 to the front of the field. After a phenomenal start, he was into the race lead by lap two with a textbook pass on the inside of Turn One. He began to build a sturdy lead back to second place, but it was erased by the race’s only full-course yellow.

The race restarted with 17 minutes remaining and Braun had no trouble defending his lead into Turn One. From there, he was untouchable, slicing through traffic and pulling away for a win by 4.652 seconds.

It was the perfect ending to a day that began by hosting the race’s Grand Marshal, three-year old Maxton Prill from nearby Topeka. The young race fan was diagnosed with Leukemia in November of 2013 and returned to the race track for the first time since his diagnosis to give the start engines command.

Jon Bennett (Driver: No. 54 ORECA FLM09): “The start was action packed. It was mix of being aggressive and defensive. I had a great start and worked my way up to P3. Unfortunately, there was another full-course caution right after. I’m starting to learn a little bit about these full-course restarts and you have to be really accurate on the throttle.

“I minded my own business and ran really good laps. We settled out in P5 with a square car. I didn’t touch anything out there and it should be a good place for Colin to start tonight.

“I’d be reeling in fourth place but then there’d be little distractions along the way, like cautions flags with a situation on the other side of a blind corner, and I didn’t want to get caught up in something I didn’t deserve to be caught up in. Ultimately we settled into a place we think is a good starting point for Colin and I’m very happy with the result.

“It was okay racing with the IMSA Lites. They were all very polite in terms of yielding to faster traffic. There wasn’t much unusual about racing with them, so I’d say it was a successful combination.”

Colin Braun (Driver: No. 54 ORECA FLM09): “It was interesting the way the format worked this weekend, having a race split in two. It was good in one way because I could sit down and pick Jon’s brain on how the first race went. I knew a little bit about what to expect and was able to build a little bit of a game plan based on what he told me. I was prepared for the start of the race to go one of two ways; either everybody would end up double file into Turn One, or we’d stack up, which is what happened. I was fortunate that I picked the path of least resistance, teed it up and was able to get by most of the guys in the first corner.

“You never know which way the traffic situation is going to go down. I was trying to build a little bit of a gap so that I could save my tires and have something left at the end of the race. I was trying to be patient and manage the risks. I thought the IMSA Lites guys did a really good job overall.

“Winning the race was the goal when we came in here. We knew it was going to be a challenging weekend when we got here with Jon not getting here until 15 minutes before qualifying. It was really cool for him to be able to see his son graduate, fly here, qualify and then us winning the race tonight. It’s a good weekend for everyone and I’m looking forward to the next one.”

8Star Motorsports stands atop of the podium at Kansas Speedway