After test last month, the ream came away with a lot of confidence and some valuable miles under their belt.

Team Seattle -The Heart of Racing is ready for the 62nd running of the Mobil 1 Twelve Hours of Sebring, Saturday, March 15.

The team took the opportunity to test last month and came away with a lot of confidence and some valuable miles under their belt. Drivers Ian James (Phoenix, Ariz), Mario Farnbacher (Ansbach, Germany), Alex Riberas (Barcelona, Spain) have a lot of respect for the bumpy character of the track and are looking forward to having a competitive Sebring weekend. The team behind them has nine Sebring wins to their credit. 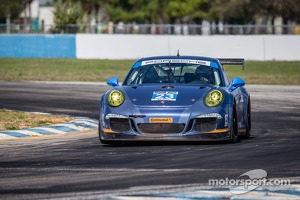 James has two class wins (2004 and 2005) and a lot of laps around Sebring as a driver and as a driving instructor.

"The Sebring test provided further tuning of the package we have and a good chance to try some updates for the car, which improved the Porsche," James said. "Without a doubt the GTD Class has the deepest quality throughout the 27 entries and there are 15 cars that could win. We will have to see if the latest round of BOP (balance of performance) adjustments have brought the Porsche up to the level of the competition. Sebring is probably the toughest race in the world in terms of the unrelenting beating the cars take on the bumpy track. We will need to be consistent, make no mistakes and stay out of the pits for 12-hours to have a chance. Sebring has a special place in my heart as I worked there for Skip Barber when I first came to America and have been fortunate to have two class wins in the 12-hour.

Farnbacher will be running the race for a second time.

"Sebring is one of the most challenging tracks of the world," Farnbacher said. "Each lap you want to push to go faster, but you have to have control as well. I really like the complex of turns from Turn One to Turn Five. There is a rhythm section there that is fun to drive. To do well this weekend we will need a bit of luck, but the main thing is to stay out of trouble over the whole race distance and keep the car clean in traffic. I also think strategy will play a major role too in this long race. I finished tenth in my class last year after a challenging race. I was leading for quite a while in GTC until we ran into problems. I know what the track and traffic can do to a car."

Riberas will be running his first Sebring race and is coming to terms with the character of the central Florida circuit.

"Sebring is extremely challenging and very bumpy, that makes it one of the most difficult racetracks I've ever seen," Riberas said. "During the first day of the test I just focused on learning the circuit. In the second day we worked a bit more on the set-up and I set the sixth fastest lap of the class. The main thing I learned would probably be how to drive on the limit while the car is jumping like a crazy horse. The first turn is, by far, my favorite. It is extremely quick, long and bumpy. It takes big guts to drive it on the limit. It will take a huge amount of effort, dedication, concentration, determination and luck to do well this weekend. This will be my first 12-hours of Sebring, but my ambitions are high. Team Seattle is going for the win."

Performance Tech has one final tast at Sebring: victory