Mario Farnbacher was at the wheel of the blue Porsche for the start of the two-hour race at the 11-turn, 2.2-mile Mazda Raceway Laguna Seca circuit.

Team Seattle had a difficult start to the day. Following the 8 a.m. morning warm-up an issue with the drive-train forced the team to change the Porsche motor and transmission. With less than an hour to perform the work, it was all hands on deck. The team had the car ready to join the grid in the original qualifying position for the 10 a.m. start.

Young Mario Farnbacher (Ansbach, Germany) was at the wheel of the blue Porsche for the start of the two-hour race at the 11-turn, 2.2-mile Mazda Raceway Laguna Seca circuit. Farnbacher grabbed the wheel and proceeded to march up the field from his eleventh place starting position all the way up to third when he turned the car over to teammate Ian James (Phoenix, Ariz.). James proceeded to keep up the pace running in third with ten minutes remaining in the event. The team had planned their strategy with the hopes of a late race yellow which didn't come. As a result they were forced to pit with just eight minutes remaining putting them back to eighth position at the checker. 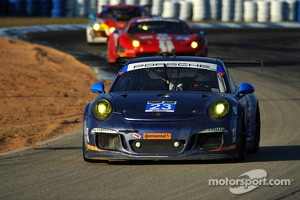 "The team are the heros today for getting the car to the grid," Farnbacher said. "I had a good opening stint. I was being careful at the start. As the race progressed I was able to get by a lot of cars from where we started on the grid. I am happy with my drive. The late race pit stop knocked us out of third place, but we were going for it. We were able to get some good points today, but of course you always want more when you are running at the front that late in the race."

James knows the team is strong on strategy and likes the way Farnbacher has gotten to grips with the track.

"The Alex Job guys performed a miracle to get us out on the grid after we had an engine issue this morning," James said. "Mario had a great first stint for us. We had a little balance issue with the car, but we were still running in third. I had some contact with the No. 25 LMPC car, that didn't help the handling. Then we had to make the decision on fuel and we were forced to stop late, which really hurt us today. We were going for the podium finish, but we came up short."

Alex Job, team owner, had the Team Seattle-Heart of Racing Porsche in a position for another podium finish.

"The team did a great job to get the car to the grid this morning," Job said. "In the warm-up we had an issue with the drive-train and were forced to replace the motor and transmission. Everyone on the team joined in and we were able to do the work in less than an hour. Mario rewarded the team with a great opening drive. We were steadfast with our strategy and just came up about four minutes short on fuel."

Team Seattle has produced an informational video on its Heart of Racing program. view below: