Team Seattle came within 30 minutes of giving Alex Job Racing its 10th-career Twelve Hours of Sebring class win. Driving the No. 23 Team Seattle Porsche 911 GT, Spaniard Alex Riberas had a 16 second lead in the GTD class when the caution came out with a half an hour remaining (lap 258). At that point, there were three cars behind Riberas that had made pit stops just minutes before the caution came out. Unfortunately, the No. 23 machine had to pit in order to have enough fuel to finish the race. 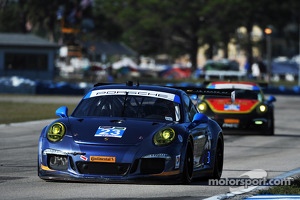 With 15 laps remaining, Riberas brought the Alex Job Racing-prepared Porsche to pit lane for tires and fuel. The race went green on lap 268 and Riberas had dropped to fourth. Six laps later, Riberas passed the No. 22 WeatherTech Porsche for third and had his sights set on the No. 555 Ferrari for second, but simply ran out of time and finished third.

"Congratulations to the team," Riberas said. "I want to thank them for the fantastic job they did. I was leading the race and it looked like, more or less, an easy win. We were leading by 16 seconds. Everything was running perfectly. Suddenly with a full course yellow and we lost the lead somehow. That's part of racing. I was in fourth place. The third place guy was pretty far in front. I just thought, 'do the best you can. If you get to third - perfect. If you don't, just finish fourth.' I gave my best. We got it [third]. So, here we are."

Teammates Ian James, of Phoenix, and Mario Farnbacher, of Ansbach, Germany, kept the No. 23 Team Seattle in the top five for most of the race. In fact, Farnbacher was leading the race when he turned the No. 23 over to Riberas with an hour and a half to go.

"It's kind of bittersweet because we had the lead with a half hour to go and a 16 second lead," James said. "Alex [Riberas] was flying out there. Sometimes you win those calls and sometimes you don't. But still, to be on the podium in the second race with the Heart of Racing program, I couldn't be more excited."

"We had a bit of bad luck with the full course caution," Farnbacher said. "Otherwise, I think we would have won this race. I'm glad we are on the podium. The guys did a great job all weekend. They worked pretty hard and late into the night. Thanks to our crew guys and thanks to my teammates who also did a great job."

"It was a great day for Team Seattle-Heart of Racing," Job said. "Ian, Mario and Alex did a great job with the car all day, never putting a wheel wrong. We went through trials and tribulations of the day with the caution and red flag periods. We had good pit stops and strategy. We were leading the race late, by almost 16 seconds and the final caution flag flew bunching the field back up. We made our final stop and came out of the pits in fourth. Alex was really driving hard and if we would have a clear run to the checker, I think he would passed everyone in front of him. Third is a good finish for the second time out for this new team. There are more good things to come."