Team Seattle raised nearly $207,000 to help the children in the hospital's heart center.

The No. 23 Team Seattle Porsche 911 GT America briefly led the GTD class early in the race after starting from the 10th row. In fact, the team was only two laps down, a little more than halfway through the race. At that point, the team was still very much in the hunt with less than 12 hours to go. 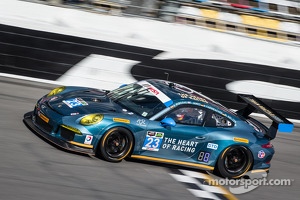 But, during the overnight hours, a couple of mechanical issues set the team back. The first issue came during a pit stop under yellow on lap 407. Driver Marco Holzer, of Bobingen, Bavaria, inadvertently hit the brake pedal during a rear brake change. In addition to that, the team had to fix the left rear tire spindle because something happened to it in the rush to get tire back on before the race went green. These two incidents forced the team to make a longer pits top than necessary and, as a result, the No. 23 machine was now five laps off the GTD pace when it returned to the track.

The second issue came early in Ian James', of Phoenix, overnight stint. He was in 11th place, five laps down, when he reported a loss of power. Porsche thought it might be an electrical or an engine issue. Under yellow, James made a pitstop to have the team take a look. The team thought it was a throttle body issue so they replaced it. The extended stay on pit lane dropped the No. 23 machine to 15th place and 18 laps down in GTD. Though the team thought they had fixed power loss issue, the No. 23 machine was still down on power, which made it difficult to make up some of the lost laps.

Mario Farnbacher, of Ansbach, Germany, started the final six hours in 15th place. He drove an uneventful double stint before turning the reigns over to Spaniard Alex Riberas, who also double stinted. Riberas was still 15th when teammate Holzer got behind the wheel with two hours remaining in the race. James drove the final hour and brought the car home 15th place.

"The car doesn't have that many scratches on it for a 24 [hour race]," James said. "I am very proud of everyone for keeping this thing going. It just wasn't our weekend."

"Obviously it's not the way we wanted to finish the race," Riberas said. "We had an engine issue this morning. We just had to deal with it and we lost quite a bit of time. Those things happen. That's racing. You can only adapt to it and try to do your best. The race itself was a magical experience for me. In my first Rolex 24 at Daytona, I learned many things and hopefully they will be useful for the future."

"It was a tough race for us," Farnbacher said. "We had a lot of problems. But, finally we finished and we collected a lot of money for the Children's Hospital. We are proud of that and we are looking forward to Sebring."

"We had a good car, but we had some issues overnight," Holzer said. "If a car has any issues, you are running behind. But, the team did an awesome job on the strategy, with the yellows and the pit stops. A big thank you to Alex Job Racing and Team Seattle. The most important thing is we finished the race on four wheels and we raised some money for the Children's Hospital. This is like our victory for them."

While the No. 23 Team Seattle Porsche did not make it do victory lane today, the children at the Seattle Children's Hospital were the big winners as a result of today's race. Team Seattle raised nearly $207,000 to help the children in the hospital's heart center.

"The kids always win here," said Don Kitch Jr., Team Seattle team manager. "Whether we win the race or not, the kids always win. We'll leave here with over $200,000 and every dime goes to the care of these kids in the heart center at Seattle's Children's Hospital. One way or another, we're racing and raising money for these kids. The kids win every time."

"That's the win here," Team Owner Alex Job said. "We were able to raise over $200,000 for the kids at the Children's Hospital. Ultimately, that was our goal. It was to raise as much money as we could. But, to do that, we had to turn as many laps as we could and we accomplished that.

"We would have liked to have finished higher - ideally on the podium if not the top step. We led and we ran in the top five for quite a while. But, unfortunately a series of small things started and they just continued. It was one challenge after another. There's some kind of electrical gremlin in the car that affects the running condition. It doesn't misfire. It just doesn't have any power. Porsche doesn't know what it is yet. We've got to find that gremlin in a short amount of time before Sebring. We've got a lot of work to do. But, at least the first goal was accomplished. [It was] to make it to the checkered flag and raise money for the kids and we did that. We're going to do it again at Sebring, but with a better result."