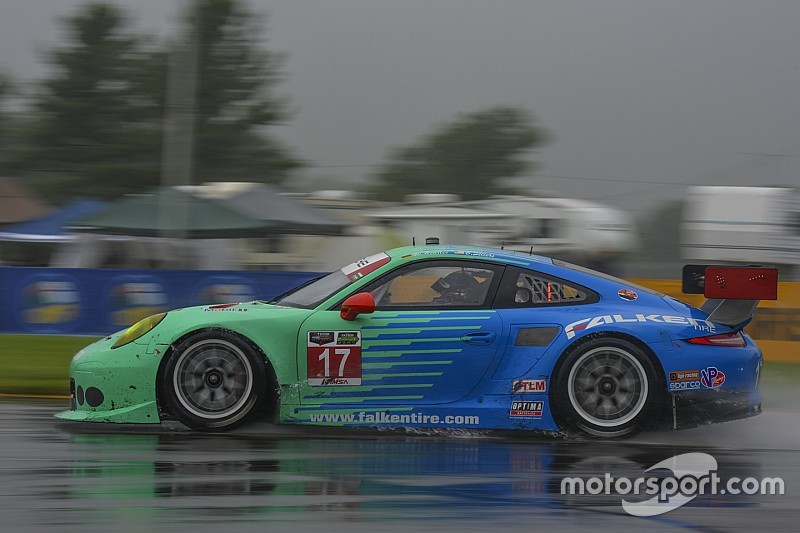 Despite the win at the Sahlen's Six Hours of The Glen, the Porsche team has no sponsor for 2016.

“WANTED: Sponsor for plucky TUDOR United SportsCar Championship team for 2016. Has won at least one race a season since 2011, including the prestigious Petit Le Mans – twice – and the most recent race, the Sahlen’s Six Hours at The Glen, in arguably the most competitive class, GT Le Mans. Seasoned crew, talented veteran drivers, great fan base, can-do attitude. Contact Derrick Walker at Team Falken Tire.”

Walker hasn’t yet resorted to running classified ads, but that’s likely what one would read like, as his Porsche 911 RSR team, with drivers Wolf Henzler and Bryan Sellers, contemplate life without Falken Tire.

Falken entered the American Le Mans Series eight years ago, and continued its sports car program into the TUDOR Championship when the ALMS and Grand-Am merged at the beginning of the 2014 season. Falken’s program was unique – the No. 17 Porsche, the only non-factory Porsche 911 RSR in the series, is essentially a research and development arm for the tire manufacturer.

And in a class where every other car runs Michelin tires, being what Walker calls “the little tire that could” has been a battle for Falken, but one they’ve won six times.

As this season began, Falken announced that it was reallocating its marketing budget into other areas, and is leaving sports car racing. “We feel extremely fortunate to have worked within the IMSA and ALMS community,” said Rick Brennan, executive director of marketing at Falken Tire. “Our special thanks go to everyone there, from series staff to race weekend volunteers. We’ve seen first-hand the level of passion and tireless commitment that everyone involved brings to the office and to the track each and every day and we will definitely miss being part of that family.”

'Yet to be decided'

Which leaves the future of Walker’s team – “Yet to be decided,” Walker said. “We’re trying hard to find another company that might want our services, knocking on as many doors as we can. But at the moment, the future is somewhat uncertain.”

Walker, whose day job is the president of operations and competition for the Verizion IndyCar series, said he has reached out to tire companies, “as well as anybody else who might have an interest. We have a lot of expertise that has served us well.”

And while you might think the opposite, Michelin executives have expressed sadness that Falken is leaving, because they are well aware that competition improves everyone’s product. “When we win,” said Falken driver Sellers, “Michelin’s people are always the first to congratulate us. They’re a class act.” The Watkins Glen race was a good test of the Falken tires – the track was soaking wet, damp, and dry several times over the six-hour race.

As for Sellers, he’s hopeful that the team will continue, as he and Henzler have become good friends and accomplished driving partners. It seems like it isn’t just the Michelin people, but pretty much everyone in the paddock comes to congratulate the team when they do well. “That’s one of the things that I love about our program,” Sellers said. “For some reason we seem to connect with people. We seem to have developed this ‘never say die’ attitude that appeals to fans.”

And it comes from experience: “We’ve been in the position where it looks like we don’t have a chance, and we keep fighting, and god things can happen. That’s made us stronger over the years.” Such as Petit Le Mans, 2013: The team practically destroyed their car at the race in Baltimore seven weeks earlier, and cobbled together enough parts on a 2010-model chassis that had been stored in the shop to finish out the last race of the season. And won.

With the GTLM cars remaining the same for the 2016 season, Sellers is hopeful that a new backer can be found that will allow them to stay in the series. If not, does he have a backup plan?

He laughs. “I actually had that conversation with my wife the other day,” said the 32-year-old driver from Georgia, who came up through the open-wheel ranks. “If I had given up every time it looked like I wasn’t going to have a job, I never would have been part of Team Falken Tire, and maybe wouldn’t even be in sports cars at all. I’m going to fight and claw and scrape to do what I have to. I love what I do, and I can’t imagine my life without it. If I have to keep fighting, I will.”

Next up for Team Falken Tire: The Mobil 1 SportsCar Grand Prix at Canadian Tire Motorsport Park near Toronto on Sunday. The race will be broadcast live on Fox Sports 1, beginning at noon ET. IMSA.com and the IMSA App will stream TUDOR Championship qualifying along with the Continental Tire Challenge race