Ricky Taylor lost the lead in the TUDOR United SportsCar Championship event after hitting the wall on the last lap but got it back seconds later when Joao Barbosa, who nudged him into the wall, lost a tire. Taylor outraced Richard Westbtook and nipped him by 0.207 seconds to claim Wayne Taylor Racing’s first Prototype class victory of the season, which gave the Taylors the series championship points lead. 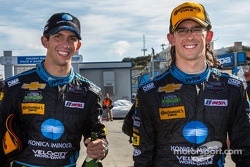 “Those last couple of laps were really tooth-and-nail,” Ricky Taylor said, adding his No. 10 Konica Minolta Corvette DP was heavily damaged in the collision.

Still, he had enough left to win a sprint with Westbrook.

“I think I had one more lap left in it,” Taylor said. “Any more than that and I think we really would’ve been in trouble.”

Barbosa made a play to pass Taylor a few minutes before the final lap but Taylor held his line and forced Barbosa to back the Action Express Racing Corvette DP off. Barbosa had a better line on the final lap but appeared to create contact.

Ricky Taylor said he barely had control of the rear suspension but disregarded it because he was so angry after hitting the wall.

The brothers’ Corvette was in front most of the afternoon and gave the day’s title sponsor a victory in the shadow of General Motors’ world headquarters. Jordan Taylor started the race fifth and got to the front 25 minutes in, before handing the wheel to his brother 40 minutes into the 1-hour, 40-minute event.

“Ricky did an unbelievable job in those last two corners,” Jordan Taylor said. “It was definitely a stressful last 20 minutes for us.”

Gustavo Yacaman and Olivier Pia were third in their Nissan/Morgan Prototype.

Westbrook, driving in relief of teammate Valiante, was happy he had a shot at the end but admitted he needed more time.

“Ricky was really good off the restart,” Westbrook said. “We needed more laps.”

The blown tire was twice as painful for Barbosa and teammate Christian Fittipaldi, who lost the series’ points lead after falling to sixth in the final few seconds.

Debris and water left on the course forced the race’s first caution period after Henrique Cisneros spun his Porsche coming out of Turn 6. An even longer full-course yellow came several minutes later after Damien Faulkner crashed his Porsche into the tire barrier at Turn 12. The ensuing caution period left the field with just 27 minutes to finish the race.

Scott Pruett and Memo Rojas, who began the day a point behind Barbosa and Fittipaldi, fell further back in the standings after early-race engine problems. Pruett started the race but parked his Ford EcoBoost/Riley 12 laps in after spending more than 15 minutes in the pits.

In the production-based GT Daytona class, Alessandro Balzan and Jeff Westphal co-drove to victory in the Ferrari 458 Italia.

GTD polesitter Spencer Pumpelly appeared to have a shot at passing Balzan’s Ferrari in the final minutes but he made contact with the wall and fell back into traffic. Balzan made the most of the clear pavement ahead of him and topped Mario Farnbacher’s Porsche by 0.297 seconds.

From the podium to Le Mans for Taylor, Westbrook