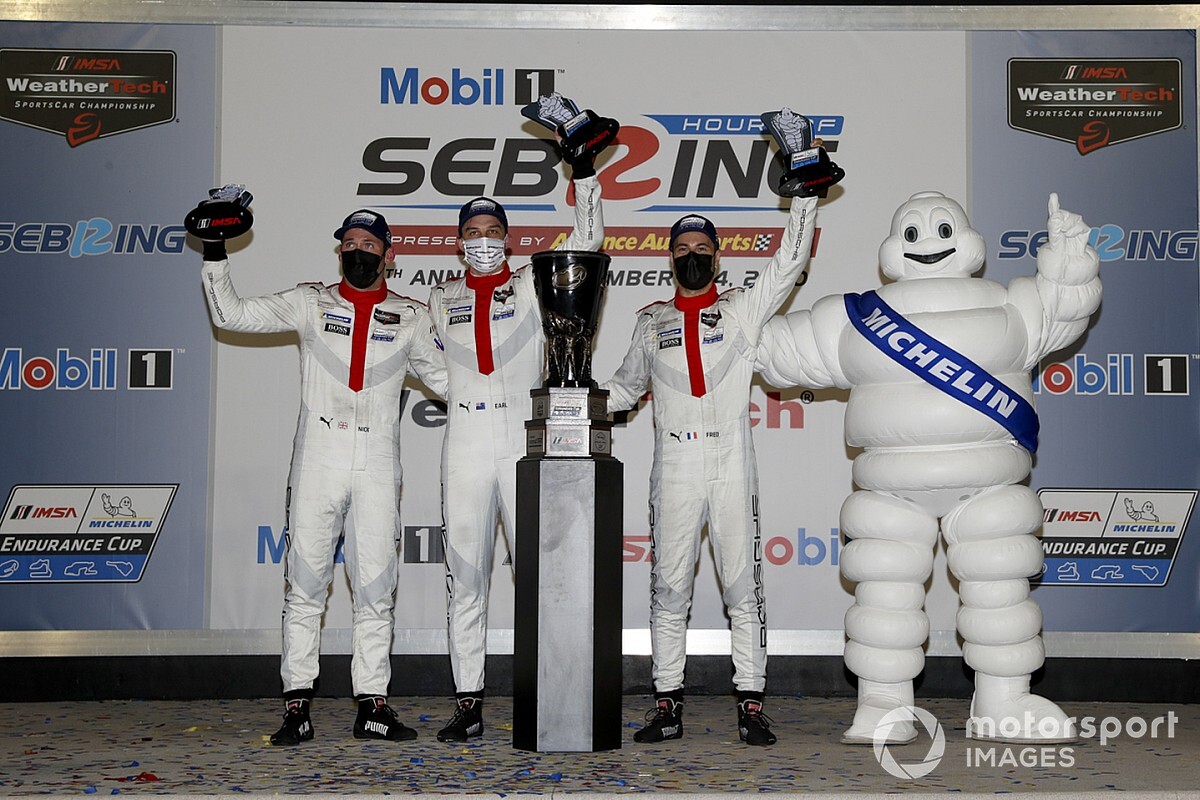 Nick Tandy says his third successive GT Le Mans win at the Sebring 12 Hours was tinged with sadness knowing it was Porsche’s final outing in the IMSA WeatherTech SportsCar Championship.

Tandy, Fred Makowiecki and Earl Bamber led a Porsche 1-2 on Saturday in their #911 911 RSR ahead of the sister #912 car that Bamber also co-drove with Laurens Vanthoor and GT debutant Neel Jani.

Not only did it mark three consecutive Sebring wins for Porsche, it was also the third straight IMSA win this season – although it was not enough to prevent Corvette Racing from sealing the drivers’ and manufacturers’ championship.

Tandy took the lead after the final restart with 17mins to go when the leading BMW M8 of Connor De Phillippi was sent off the track by a punt from Lawson Aschenbach's GTD-class Riley Motorsports Mercedes-Benz AMG GT3. Tandy thereafter held the lead to the checkered flag beating the #912 sister car by nine seconds.

“We were trying to chase down the #25 [BMW] and we probably didn’t have the pace on them on a long run,” Tandy admitted, “but we were obviously trying to keep pressure on them.

"I watched when [De Phillippi] went off into the grass, went up the inside and said, ‘Ooh, we’re in the lead!’ It was good for us. We were happy with it.”

However, the Brit admitted he was in a conflicted mood after the race. Tandy has raced with the CORE Autosport-run Porsche team in IMSA since 2014, scoring 13 of its 21 wins. These included the Rolex 24 Hours at Daytona in 2014 and a remarkable outright victory in the rain at Petit Le Mans in 2015.

"Our third straight win at Sebring, plus a double victory for Porsche – at the last outing of our works team no less! It doesn’t get better than that," said Tandy, who also helped Patrick Pilet claim the 2015 IMSA GTLM drivers’ title for Porsche.

"Despite all the rejoicing, I feel very sad at the same time. We’ve scored so many incredible victories over the past few years and I’ve grown very close to the team."

Bamber, for whom this was a first Sebring triumph, added: "It’s awesome to finally get that first win at Sebring; been trying quite a few times.

"I think it’s a super fitting way to finish the program. The last race is always what you’re remembered by and a 1-2 is the perfect way to go out for this program.”

Porsche's Head of Operations for IMSA Steffen Hollwarth admitted that the "mood was different than usual" in the camp ahead of its final race.

“I’m incredibly proud of the team, this weekend wasn’t easy for us," he said. "Because of the upcoming farewell, the mood was different than usual, but everyone coped just fine.

"We weren’t the fastest in the field, but we were the ones who made the least mistakes – and that’s how things like this happen."