There was a whole lot of 'new' for Muscle Milk Pickett Racing as the team celebrated the start of the New Year at Daytona International Speedway this past weekend at the annual Roar before the 24 test session.

However, even if being competitive is the nature of racing, the Muscle Milk squad and its drivers Graf and Luhr as well as Alex Brundle and Tom Dyer who joined the team for the test, were well aware that they wouldn't be atop the time sheets at their initial test in the TUDOR United SportsCar Championship for different reasons.

One of which is the straight-line speed difference with the Daytona Prototypes (DP) around the trioval part of the track they use at Daytona International Speedway. Another is the fact that the team was using this three-day test as a shakedown for their brand new ORECA/Nissan, which they only took possession of just over two weeks ago.

Alex Brundle hopping aboard the ORECA Nissan The team's main focus over the three days was to learn and gain as much data as possible and they came out very satisfied with what was deemed a productive test in which the #6 Muscle Milk car ran flawlessly in the 12 plus hours of testing available to them. 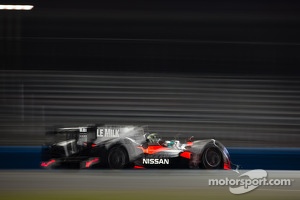 The ORECA/Nissan's reliability in its on track debut is a testament to all of the hard work done by the Pickett Racing crew in the last few weeks to get the car ready for its initial outing.

With this first test now behind them, the Muscle Milk Pickett Racing team still has quite a bit of work to do in the next couple of weeks to close the gap to the faster DP cars.

The team will only have about four hours of practice time between now and the moment the green flag falls on the season opening Rolex 24 at Daytona, but their 'never give up' and fighting attitude is more present than ever.

The team thrives on challenges and this one only fuels the fire even more.

The opening round of the TUDOR Championship - the Rolex 24 at Daytona - takes place January 23 - 26, 2014 at Daytona International Speedway.

"This was a shakedown test for our new Muscle Milk ORECA/Nissan package and I think we can be very pleased with what we achieved. The Pickett Racing car ran without any problems, very reliable, which can always be a big question mark in the beginning with a new car and a track like this. We did a lot of laps, gathered a lot of data and learned a lot about the Continental tires. "All in all, we're going away from here with a good spirit for the 24 hour race."

"Doing a shakedown test is never easy, especially when you're doing it at a big test like the Roar where there are a lot of teams and media present. But we made good progress with our Muscle Milk ORECA/Nissan and learned a lot. Most importantly, we ran without mechanical failures and we didn't have any gremlins to fix, which can be rare with a brand new car and that is a sign of the great work done by the Pickett Racing boys. "There's still some work to do, which is normal, but we've also collected a lot of data and completed a lot of miles that will help us improve for when we come back for the race in a couple of weeks."

"Overall, I think we had a decent test, especially in terms of building a body of data about what we can change on the Muscle Milk ORECA/Nissan and what affect it can have. In terms of ultimate performance, we didn't move that far forward but that wasn't really the goal this week. "The team has been very welcoming, a great team. Greg (Pickett) has made me feel like I've been here a whole lot longer than I have, so that's been really nice and I've enjoyed being here a lot. "We need to improve for the race, but we know the areas where we can do that and I'm looking forward to coming back in a couple of weeks."

"Testing was really good. It's a pleasure to be here with such a great team and effort. This is a historic event that the team is getting ready for and I thought testing went pretty well. The new ORECA/Nissan came out of the box really good and we just have to come to grips as we are with the new configurations that we have to run under, like tires. "The team is doing a great job of getting a handle on it and figuring it out. The Muscle Milk ORECA/Nissan will only be better for the race in a couple of weeks."