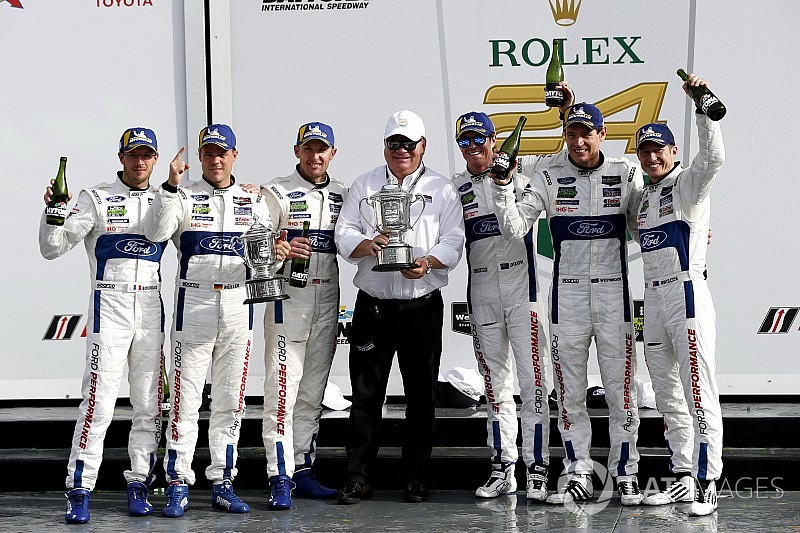 Richard Westbrook has revealed how he, Scott Dixon and Ryan Briscoe got the edge over the sister Ford GT to clinch class honors in the Rolex 24 Hours at Daytona and thereby clinch Chip Ganassi Racing’s 200th win.

Ford's GTs were in a class of their own for the vast majority of the race, leading 774 of the 783 laps, and delivered the marque’s second consecutive GT Le Mans triumph in the twice-round-the-clock classic.

The pair also ran exceedingly close to each other, but with the #66 car of Joey Hand, Sebastien Bourdais and Dirk Muller leading 625 laps to the 149 of the winners.

However, two pitstops from the end, a short-fill stop and favorable track conditions allowed Westbrook a chance to make a break, and the #67 eventually crossed the line 11.18sec ahead of its sister car. It was Ganassi’s eighth Rolex 24 victory in 15 attempts.

Westbrook said: “There was a little bit of strategy played out between the two teams, everyone was trying to outsmart each other. We chose to short-fill and that’s what got us out in the lead. They put me out on a nice clean track with new tires, so I was able to push. I had a good out-lap, and built up a lead.

“I think that took the pressure off. And [the #66 crew] tried to react to that by doing a shortfill next time, as you obviously would, but by that point we were on the front foot and we’d pretty much sewn it up.

“Obviously the cars are the same and it was very, very difficult to make the pass. There was a bit of passing between the cars in the race but we were so evenly matched it would have taken a mistake or traffic to make that move.

"So it did require something from the pitcrew, and our side of the garage did a great job and they can take a lot of credit for this win.”

Briscoe also paid tribute to the crew, stating: “Just to see both cars running so strong start to finish is a huge testament to the team. The work that everyone puts in – there hasn’t been any downtime since Road Atlanta [Petit Le Mans 2017].

“There has been a lot of change in the team since then, especially on the #67 side, a lot of new people, and they’ve just integrated themselves so well into this program, and it showed today. Running the car, pitstops, driver changes – it was all just perfect.”

Dixon, for whom this was a third Rolex 24 triumph, described it as one of his “most nervous races” given the proximity of the sister Ford, and Chip Ganassi shared this sentiment.

“It was one of the most nerve-wracking races,” he said. “When you come out of the blocks fast like that… after a certain amount of hours, it’s your race to lose.

"It’s one thing not to win the race, it’s another if you lose it. So it was our race to lose and those are the worst races from my point of view because everything’s out of my control.

Modest about the 200 wins

Ganassi showed similar humility when asked about how he felt to reflect on his team’s achievements since Michael Andretti scored CGR’s inaugural victory in the Indy car race at Surfers Paradise in 1994.

Despite racking up a further 102 Indy car wins, 56 victories in sportscars, 39 in NASCAR and two in rallycross, Ganassi said the team’s modus operandi was about getting the most out of each day.

“There’s a time and a place to talk about [200 wins],” he said, “but we’re the kind of team that just try to do the best we can today. And of course yesterday we tried that too. That’s how we approach every day. This is about today at Daytona, it’s about the Rolex 24, it’s about these three guys up here.

“But like Mike Hull [team director] always says, ‘Let’s do the best job we can do today. What can we do about what’s in front of us today?’ That’s how we approach things.”

Dixon, who has delivered 43 of those wins – 40 in Indy cars, three in sportscars – was asked what was key to Ganassi’s success, and replied: “For me, it’s the personnel, Chip and Mike and everyone involved: they have a great group of people that work very well together.

“Everyone just has to win. That’s the most simple thing. We come [to a racetrack] every weekend to win – there’s no thinking about finishing or finishing second and so on.

"Everybody thrives on the winning culture this team has and they’ve definitely proven it in many ways across many different disciplines in auto racing.”