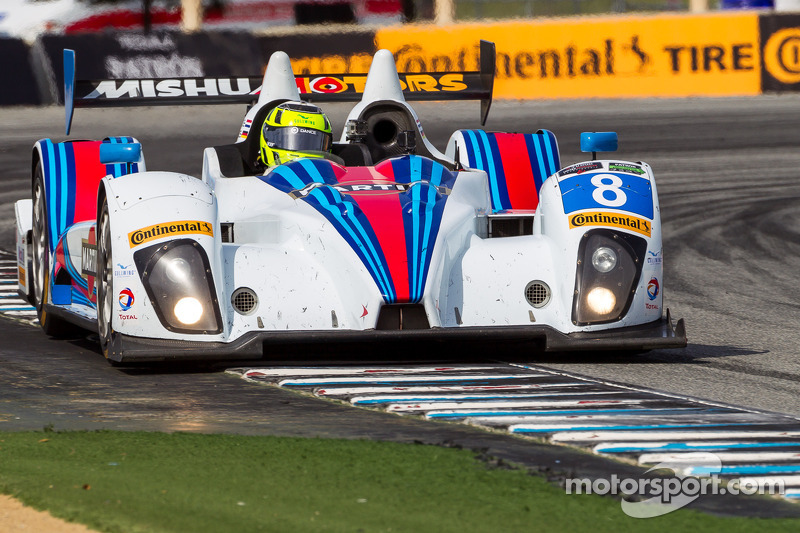 Rayhall had gotten reasonably close to van der Zande, but spun in Turn 10 with 11 minutes remaining.

“To get close is one thing … to get past is another thing,” said van der Zande, who co-drove with German Mirco Schultis. “If you know that you can control the race. Leading the race is the best thing you can have [going for you]. Take the risk and control the traffic.”

Van der Zande, from the Netherlands, actually downplayed Rayhall’s late-race charge that cut a sizable advantage to merely a few seconds, saying, “I was just conserving on everything at that point … early lifting ... taking it easy on the tires. I knew I had [only] two [fresh] and he had four tires.

Schultis started the No. 8 and ran 41 minutes, remarkably surviving an early-race incident in Turn 8 with the No. 54 CORE autosport entry of Jon Bennett, who co-leads the championship standings with co-drive Colin Braun.

“I thought that was the end,” Schultis said, “Somehow I got out of the dirt and on the track and somehow it was still running.”

Was it ever. Van der Zande would grab the lead with 23 minutes remaining, when the pole-sitting No. 09 entry driven by Bruno Junqueira of RSR Racing pitted for tires and fuel. Aside from Rayhall’s temporary challenge, it was routine from there.

“Getting the win is always nice, huh?,” said van der Zande. “At Daytona and Sebring we had some troubles with the cars and here it was just a flawless weekend.

“Mirco did a good job by keeping it on the lead lap and avoiding some crashing people into him. And when he went into the pits [for the driver change], the guys did a really good pit stop. I was not even finished with my seat belts when I had to go already; that means they are really fast. We came into the track and already on the restart I overtook one car, then another, on the same lap. It was a lot of risk, but that's what you have to take.

“And our team had a really good strategy. When they called me in fuel, I was one of the earliest [to do so] and it was a bit of a surprise for me. So I went in the box and they started to change the right-front and then they ended up changing the right side completely. It was hard work at the office today, but good to take the win at the end.”

To fine, or not to fine?