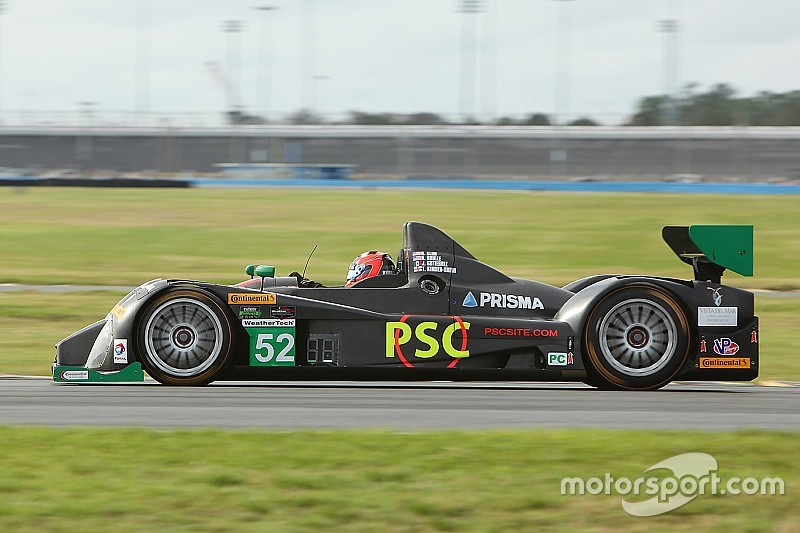 Daytona Beach, Fla. – Ford Chip Ganassi Racing’s “Star Car” returns to defend its victory in the 54th Rolex 24 At Daytona, although many of the 13 entrants in the Prototype class can share that nickname entering the 2016 IMSA WeatherTech SportsCar Championship opener at Daytona International Speedway on Saturday and Sunday, Jan. 30-31.

The lead class features a diverse mix of LM P2 entries with Daytona Prototypes along with the unique DeltaWing coupe. Based on lap times from the recent Roar Before the Rolex 24 test three weeks ago – the opening event for the Daytona International Speedway motorsports stadium after the completion of the $400 million DAYTONA Rising project – will feature a wide-open battle for the overall triumph.

It’s great to be back with the same team with new co-drivers,

“The Rolex 24 At Daytona is a very special race for us,” said Dixon, who also was part of Ganassi’s first Rolex 24 victory in 2006. “I think I’ve done every race for Chip here dating back to when he first entered the series back in 2004. It’s the kick off to the motorsports season and the whole Ford Chip Ganassi Racing team will be ready to go.

“We have a solid lineup in the No. 02 again returning with Tony, Kyle and Jamie, and this team has a lot of experience in these types of races. You have to be strong for the entire 24 hours without mistakes. It’s a big task as always, and we hope to give the prototype a good sendoff and accomplish what we did last year.”

Former Ganassi regular Scott Pruett teams up with long-rime rival Action Express Racing in a bid for an unprecedented sixth overall triumph in the event. He teams with defending two-time Prototype champions Joao Barbosa and Christian Fittipaldi in the No. 5 Mustang Sampling Corvette DP, as well as 2013 Rolex 24 GT winner Felix Albuquerque in a lineup combing for a record 16 Rolex 24 class victories – most of any entry in the history of the event. Action Express also fields the No. 31 Whelen Engineering/Team Fox Corvette DP for Eric Curran, Dane Cameron, Simon Pagenaud and Jonny Adam.

Other Daytona Prototypes opening their final year of eligibility before a new era for Prototype racing begins in 2017 are the No. 90 Visit Florida Racing entry of Ryan Dalziel, Marc Goossens and 2014 Indy 500 winner Ryan Hunter-Reay; the No. 10 Konica Minolta Corvette DP of brothers Ricky and Jordan Taylor with 2005 Rolex 24 winner Max Angelelli; and the No. 50 Fifty Plus Racing Foundation entry for former Rolex 24 winners Jim Pace and Dorsey Schroeder, joined by Byron DeFoor, David Hinton and Thomas Gruber. Next year, the Prototype type class will showcase a new car based on international LM P2 specifications known as Daytona Prototype international (DPi) cars, which will feature involvement from multiple manufacturers.

The current-generation DPs face a solid challenge this weekend, based on solid performances by the five LM P2 Prototypes and the DeltaWing coupe in the recent Roar Before the Rolex 24 test. Ozz Negri, AJ Allmendinger, John Pew and Olivier Pla dominated much of the test in the No. 60 Michael Shank Racing Tire Kingdom Honda Ligier JS P2. However, the No. 2 Tequila Patrón ESM Honda Ligier JS P2 of Pipo Derani, Ed Brown, Johannes van Overbeek and former Rolex 24 winner Scott Sharp turned in the fastest lap in the final session of the Roar.

“It’s great to be back with the same team with new co-drivers,” Kimber-Smith said. “My three teammates are all rookies, but during the Roar Before the Rolex 24 they didn’t do anything wrong and we were fairly quick. This is similar to the same boat we had with the three drivers we were with last year,” when he was joined by Mike Guasch, Andrew Palmer and Andrew Novich.

CORE autosport lost a heartbreaker at Daytona last year, losing the PC lead in the final minutes after leading 80 percent of the event. Two-time WeatherTech Championship PC titlists Colin Braun and Jon Bennett will be joined by Mark Wilkins and Martin Plowman in quest of their second Rolex 24 class victory in three years in the No. 54 Flex-Box/Composite Resources entry.

Other PC entries include the No. 85 JDC-Miller Motorsports ORECA FLM09 of Chris Miller, Mikhail Goikhberg, Stephen Simpson and Kenton Koch, and the No. 38 Performance Tech Motorsports HighBloodCalciumIsBad.com/ComServ Wireless/Windstax Wind Power Systems entry of the father-son combination of Jim and Josh Norman, joined by James French and Brandon Gdovic.

Practice for the Rolex 24 At Daytona begins at 9:25 a.m. ET on Thursday, Jan. 28, with qualifying taking the green flag at 4 p.m. The weekend also includes the BMW Performance 200, the opening round of the IMSA Continental Tire SportsCar Challenge, on Friday at 1:45 p.m.

Television coverage of the Rolex 24 gets underway on Saturday at 2 p.m. ET on FS1.

Michelin readies its options for 24 at Daytona