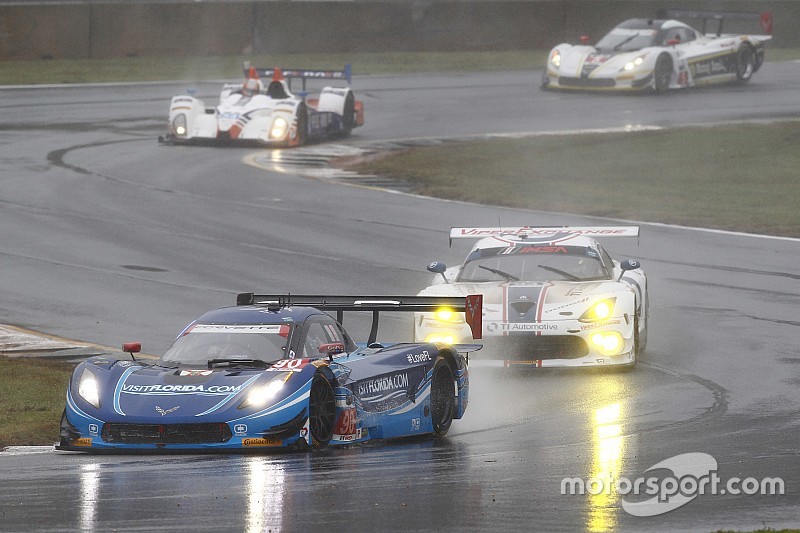 The season-ending TUDOR United SportsCar Championship’s Petit Le Mans, run last Saturday entirely in the rain – thanks in part to Hurricane Joaquin churning off the Atlantic coast, drawing all the moisture from the southeast and dumping part of it on Road Atlanta – proved one thing: This is an all-weather series, with all-weather drivers, teams, cars and fans.

As dusk arrived the scheduled 10-hour race was shortened by almost two hours as the visibility, or lack of it, made driving through the roostertails would be unsafe. But it also meant a premature end to the season championship fight in three of the four classes, with only Prototype Challenge decided early in the race.

Two drivers who would love a do-over are Richard Westbrook, of the No. 90 VisitFlorida.com Chevrolet Corvette Daytona Prototype, and Christina Nielsen, driver of the No. 007 TRG-AMR Aston Martin Vantage. Both came to Road Atlanta leading the driver points, both left disappointed.

Westbrook qualified the car on the pole, and absolutely dominated the first two hours of the race. “Really impressed by Richard Westbrook’s wet driving clinic at the front of Petit Le Mans – untouchable & flawless when he held the 90 car’s wheel,” tweeted Mike Hull, managing director of Chip Ganassi Racing, which was running the No. 01 Ford EcoBoost Riley in competition with Westbrook’s car.

But changing conditions shortly after Westbrook turned over that wheel to his two co-drivers essentially ended his championship hopes – both drivers spun, and the car went several laps down as a result. The team battled back to a fifth-place finish in the class, but it would have taken a third or better to clinch the championship, meaning, for the second year in a row, it went to the No. 5 Action Express team.

Similarly, Christina Nielsen came to the race with a scant one-point lead in the driver’s championship in GT Daytona, in hopes of being the first female champion in a major road-racing series. But while the Aston Martin ran a consistent race all day, the ninth-place finish wasn’t enough, though the car was only one lap behind the class winner. The championship went to the Scuderia Corsa Ferrari drivers, Townsend Bell and Bill Sweedler.

Still, Nielsen earned some solid praise from someone who knows about road racing: Lyn St. James, Indianapolis 500 Rookie of the Year and two-time winner of the Rolex 24 at Daytona.

“She’s a solid competitor, and she’s improving with every race,” St. James said. “She has the bit in her mouth and she’s running hard to the finish. She’s surrounded by a good team, and I think she’ll only get better.”

SPEAKING OF ST. JAMES: She came to Road Atlanta to give the Women in the Winner’s Circle Leadership Award, presented by the Women’s Sports Foundation, to Dr. Don Panoz, chairman of DeltaWing Technology Group, founder of the Panoz Motor Sport Group, the American Le Mans Series (ALMS), and the Women’s Global GT Series.

Panoz is recognized for his many contributions and support of women in automotive and motorsports. St. James created the Women in the Winner’s Circle Leadership Award in honor of Paul Newman, a legend in entertainment, racing and philanthropy. In 2008 his Newman’s Own Foundation provided the initial funding that enabled St. James – former president of the Women’s Sports Foundation – to establish the Project Podium Scholarship for women in racing.

In 1999 Panoz founded the Women’s Global GT Series, a road racing series open to professional female drivers piloting identically prepared 400-horsepower Panoz Esperante GT race cars. He also has Katharine Legge as one of the drivers of his DeltaWing Prototype car, who, along with Christina Nielsen, are the only full-time female racers in the series.

“I’m very honored and humbled to receive this award,” said Panoz. “My father taught me to work hard and never give up, and this has been my driving force. It’s what has energized me to do things like start a motorsports program, multiple international racing series like ALMS and the Women’s Global GT Series, and race the DeltaWing.”

SCCA SETS THE DATE: The 2016 SCCA National Championship Runoffs presented by Garmin VIRB will return to Mid-Ohio Sports Car Course for the first time since 2005, September 19-25, 2016 at the Lexington, Ohio track.

The host track for 2016 was announced as part of the new rotational format in July of 2013, but competitors can now make concrete plans for the event's return following visits to Road America, Mazda Raceway Laguna Seca and Daytona International Speedway in successive years.

"It's been 10 years since we've been to Mid-Ohio for the Runoffs, and for drivers of a certain age, it feels like going back home," Eric Prill, SCCA Vice President and COO said. "It's also been long enough that a whole different generation will experience a Mid-Ohio Runoffs for the first time, which is exciting. September is a beautiful time in central Ohio, with the fall foliage, the crisp mornings and the short-sleeve afternoons. This should be a can't-miss event for every SCCA member and fan."

The largest Runoffs on record came at Mid-Ohio in 2004, when 709 cars competed in the event. The Runoffs has crowned Club Racing National Champions in a winner-take-all, single race format since 1964. The SCCA was hoping for a new record at Daytona, but fell short.

TEQUILA PATRON ENDURANCE CUP: Petit Le Mans was such a busy race that the four winners of the Tequila Patron Endurance Cup, awarded to the teams that performed best at the four longest endurance races of the season – Daytona, Sebring, Watkins Glen and Road Atlanta – might have been overlooked.

So here they are: In Prototype, the Action Express No. 5 team’s Christian Fittipaldi and Joaa Barbosa; in Prototype Challenge, the No. 52 PR1/Mathiasen team of Mike Guasch, Tom Kimber-Smith and Andrew Palmer; in GT Le Mans, the No. 3 Corvette Racing team of Antonio Garcia and Jan Magnussen, and in GT Daytona, the No. 93 Dodge Viper team of Cameron Lawrence and Al Carter. That win in GT Daytona is especially remarkable as it’s a part-time team and only ran those four races.

Said Fittipaldi: “The Patrón Endurance Cup only started last year, so winning the first two in a row is definitely very big; hats off to the team, Chevy and Mustang Sampling. We make up a very solid group, and winning this proves that – being able to be in contention and winning the same championship two years in a row. There’s not much else I can say.”

GREENEST CAR: Also, the DEKRA Green Challenge Award winner was the No. 24 BMW RLL Team Z4 GTLM. The award is presented each race to the most environmentally clean, fast and efficient GTLM competitor. The award is determined through Green Racing protocols established by the United States Department of Energy (DOE), Environmental Protection Agency (EPA) and Society of Automotive Engineers (SAE) International.

AND SPEAKING OF BMW: This may be the last we see of the BMW Z4 in the GT Le Mans class, as BMW made an announcement that they’d be back next season with the Bobby Rahal and David Letterman-led Team RLL with a car based on the M6.

BMW M6 GTLM. The plan is to return for an eighth season with BMW Team RLL and field the newly developed racing car in the IMSA WeatherTech SportsCar Championship in 2016.

“Using the basis of our new BMW M6 GT3 to develop a car for the WeatherTech Championship was a logical step,” said BMW Motorsport Director Jens Marquardt. “The BMW M6 GTLM has all the essential ingredients to thrill fans in the USA and Canada. We are keen to continue our works commitment on the other side of the Atlantic at the highest level since the WeatherTech Championship is a fantastic stage with a high quality field and legendary venues. We feel right at home there.”