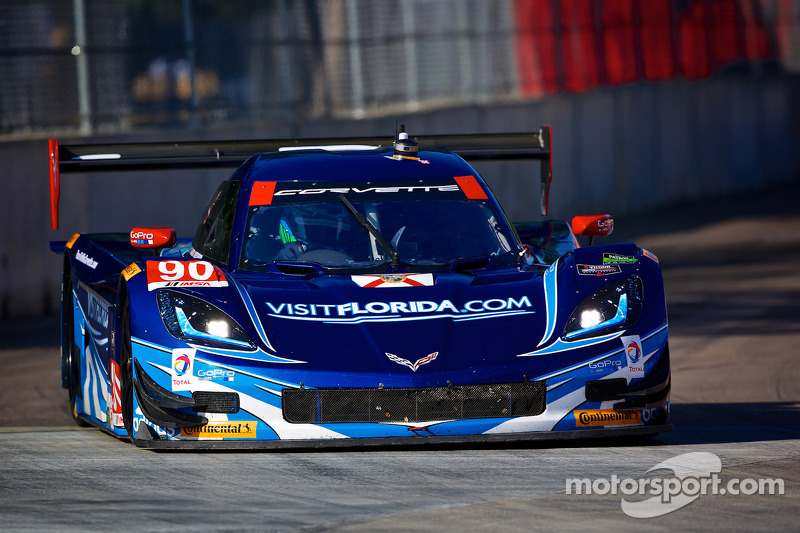 When Spirit of Daytona Racing takes the green flag on Sunday for the Sahlen’s 6 Hours of the Glen (11:00 AM, FOX Sports 1), the team will make its 10th start in the six-hour classic endurance race at Watkins Glen International. And with a stellar driver line up of Richard Westbrook and Michael Valiante, who will pilot the No. 90 VISITFLORIDA.com Corvette Daytona Prototype, hopes are high for a positive performance in this year’s running of the event.

The race weekend sees all four IMSA TUDOR United SportsCar Championship classes reunite on the same circuit for the first time since the 12 Hours of Sebring. 55 cars are expected for the historic Glen race with increased traffic bound to play a major role around the 3.4-mile New York road course.

The team has had a strong run of momentum this year with four top-five finishes in the first five races of 2014. Spirit of Daytona Racing took home a season-best finish of second in the previous round at Detroit and look to build on that and go one better to capture their first Glen 6 Hour victory on Sunday.

Both Valiante and Westbrook have years of experience in the Sahlen’s 6 Hours of the Glen with 10 starts between them. Valiante finished third in 2008 in the No. 10 Corvette DP and returned to the podium last year when he finished second driving the No. 8 Corvette DP entry. Westbrook took a best finish of fourth in the grueling race in his 2007 debut.

As one of the few teams fielding just two drivers for the six-hour race, strategy will also be key and with nine previous starts in the event, Spirit of Daytona aims to take advantage of their experience and the depth of talent between Valiante and Westbrook. Valiante will be extra busy throughout the weekend as he’ll also drive for HART Racing in the Continental Tire SportsCar Challenge Series.

“Getting this team on the podium at Detroit was pretty rewarding for the work the guys have put in and it would be great to go one better this weekend, especially with this also being part of the Patron Championship (North American Endurance Championship),” said team owner Troy Flis. “This is a race where we expect the P2 cars to have good race pace, but there are so many factors that go into a result that we’re just focused on what we need to do to get everything out of this weekend.”

The team’s previous best finish in the 6 Hour event was third in 2010 with drivers Antonio Garcia and Buddy Rice.

The Sahlen’s 6 Hours of the Glen event will kick off on Friday with a one-hour practice session. Two more practices are scheduled for Saturday prior to a 15-minute qualifying session which will begin at 5:00 PM ET. The IMSA TUDOR United SportsCar Championship will start the 2014 running of the Sahlen’s 6 Hours of the Glen at 11:15 AM ET on Saturday. Live television coverage begins at 11:00 AM ET on FOX Sports 1.