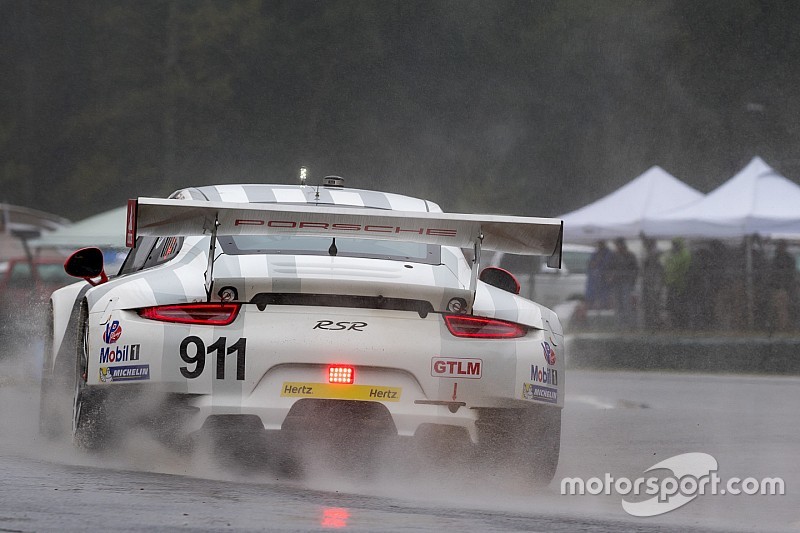 Tom Kimber-Smith: 'I don't think I've ever been that wet in my life, even in the shower.'

BRASELTON, Georgia – No, it didn’t go the full 10 hours, but the Petit Le Mans Powered by Mazda was easily the toughest TUDOR United SportsCar Championship endurance race of the 2015 season – tough on drivers, crews, officials and fans, some of whom returned to their cars in the Road Atlanta parking lots and found them axle-deep in the red Georgia mud.

The rain never stopped, ranging from drizzle to downpour, with tantalizing skies that often looked to be lightening up but never quite did. “We weren’t racing, we were just trying to survive,” said Scott Pruett, driver of the No. 01 Chip Ganassi Racing with Felix Sabates Ford EcoBoost Riley Daytona Prototype, which finished second in class, fourth overall.

Wait, fourth overall? Yes, for the first time since 2003, when the TRG Porsche 911 won the Rolex 24 at Daytona – thanks in part to then-fragile Prototypes – a GT car not only won overall, but another GT car scored a second-place finish.

Again, the winner was a Porsche 911, and number 911, driven by 24 Hours of Le Mans overall winner Nick Tandy, co-driving with Patrick Pilet, who won the season championship in GT Le Mans. When the race was stopped due mostly to visibility issues as darkness approached, Tandy was in the lead, just ahead of the No. 24 BMW Team RLL Z4 GTE driven by John Edwards, Lucas Luhr and Jens Klingmann.

The 24 team came to Road Atlanta with a shot at the title behind Pilet and Porsche, “But those guys were just unbeatable all day long,” BMW driver Edwards said. Third in GTLM, and sixth overall, was the No. 4 Corvette Racing C7.R of Oliver Gavin, Tommy Milner and Ryan Briscoe.

It looked like the Prototype win was going to go to one of the Action Express teams – the No. 5 Corvette DP of Christian Fittipaldi, Joao Barbosa and, helping out on the long races, Sebastien Bourdais, or the No. 31 Corvette DP of Eric Curran, Dane Cameron and Max Papis. The No. 31 was pitting off-sequence with other Prototypes, and showed a lot of speed. But when the checkered flag flew during a caution period – unexpectedly, with virtually no notice to the teams – the No. 5 crossed the line just behind the two GTLM cars.

So not only was the No. 5 car the winner of Petit Le Mans, regular drivers Barbosa and Fittipaldi repeated as season champions, and all three of the drivers won the Tequila Patron North American Endurance Cup. The NAEC is awarded to the teams with the best record in the four longest races – Daytona, Sebring, Watkins Glen and Road Atlanta. “In two years, this car has missed completing only one lap,” Fittipaldi said. “It’s such a team effort.”

Still, conditions were, at times, “really horrendous,” Bourdais said. “It was very stressful.” There was a puzzling one-hour, five-minute red flag midway through the race, but it fell when conditions weren't that bad, and they got worse as soon as the green flag fell.

The No. 01 Ganassi car was second in the Prototype class, fourth overall, with drivers Pruett, Joey Hand and Scott Dixon. Third was the No. 31 Action Express car.

The Prototype Challenge title was decided early in the race, with the CORE Autosport Oreca-Chevrolet of Jon Bennett, Colin Braun and Anthony Lazzaro took their second straight championship, despite the fact the car finished 29th of the 36 starters.

The PC race win, as well as the NAEC title, went to the No. 52 PR1/Mathiasen entry of Mike Guasch, Tom Kimber-Smith and Andrew Palmer. Second in Prototype Challenge was the No. 8 Starworks entry of Renger van der Zande, Mirco Schultis and Mike Hedlund.

Said Kimber-Smith about his stint in the open-cockpit car: “I don’t think I’ve ever been that wet in my life, even in the shower.”

In GT Daytona, TRG-AMR Aston Martin driver Christina Nielsen came to Petit Le Mans with a one-point lead in the championship, and while her No. 007 car stayed out of trouble, the ninth-place finish in class wasn’t good enough for her to take the title.

That went to Bill Sweedler and Townsend Bell, driver of the No. 63 Scuderia Corsa Ferrari 458 Italia they shared here with Jeff Segal. They finished fourth in class, 20th overall. Sweedler drove only one lap, but that was all he needed to gain points. “We executed, we did what we needed to do.”

The GT Daytona win went to the No. 73 Park Place Porsche 911 GT America of Patrick Lindsey, Madison Snow and Spencer Pumpelly, their second of the season. It was especially satisfying for Pumpelly, who lives in Atlanta. “This is as sweet as it gets,” he said.

The GT Daytona NAEC title went to the No. 93 Riley Dodge Viper GT3-R, which only ran the four longest endurance races. Drivers Cameron Lawrence, Al Carter and Marc Goossens wrapped up the title with a third-place finish in the class.

The heartbreak award, if there is one, has to go to the No. 90 VisitFlorida.com Corvette Daytona Prototype – driver Richard Westbrook qualified on the pole by a large margin, and led during the opening stint unthreatened by anyone else. But he turned the car over to Michael Valiante during a caution period, and Valiante spun on the front straight. He turned the car over to Mike Rockenfeller, and he spun on the front straight. Though they rallied back to a 12th-place finish, their title hopes were over.

In all, a tough day for all involved. “There were difficult conditions,” said Prototype Challenge driver Jon Bennett, “but that’s what endurance racing is all about. This is not for children.”

Next up for the WeatherTech SportsCar Championship, as that is what the series will be called in 2016: The Rolex 24 at Daytona January 30 and 31, in the newly rennvated ($400 million worth) Daytona International Speedway.