Simpson dodges rain to qualify on the Lime Rock pole 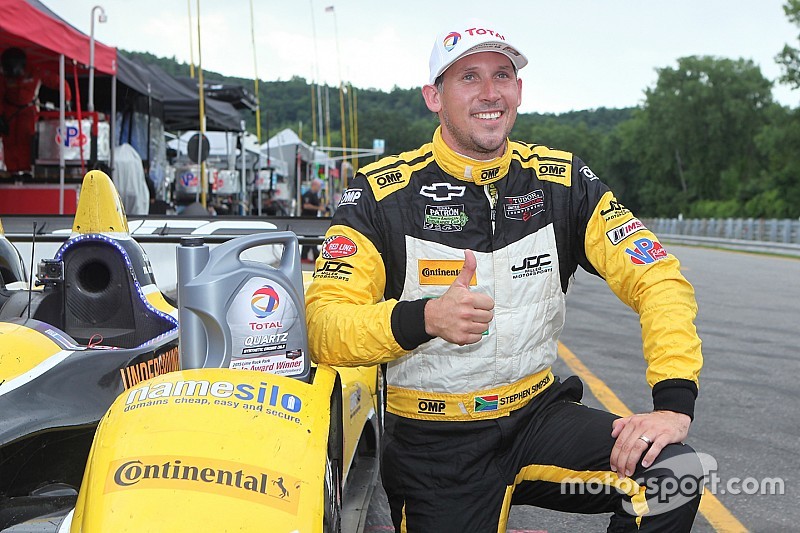 LIME ROCK, Connecticut – Rain threatened at the start of the Prototype Challenge qualifying session at Lime Rock Park, and Stephen Simpson, driver of the No. 85 JDC/Miller Motorsports entry, saw it coming.

“I tried to get a couple of good laps right away in case the rain started to come down,” and one of those laps was good enough to give Simpson the pole for Saturday’s TUDOR United SportsCar Championship Northeast Grand Prix at Lime Rock Park.

That was a smart move, but not necessarily for the reason Simpson thought, as early in the session, Todd Slusher spun the BAR1 Motorsports entry and made contact with the steel barrier, causing moderate damage to the left rear of the car.

Qualifying was halted while the safety crew loaded the car onto a wrecker, but the 15-minute clock for qualifying continued to count down, making for some nervous moments on pit row: With a 6 p.m. curfew at Lime Rock, would they get qualifying started again to give the other six entries a shot at beating Simpson’s time? And would the rain, which was just starting, hold off long enough for a few more laps?

In GT Daytona, the other class running in Saturday’s Northeast Grand Prix, Dion von Moltke run a lap of 54.004 seconds in his No. 48 Paul Miller Racing Audi R8 LMS, edging out Ben Keating’s 54.013 in his No. 33 Riley ViperExchange.com Dodge Viper SRT. Keating had lead early in the session before von Moltke turned in his fastest lap, and Keating spun trying to “squeeze another hundredth of a second out of the car,” he said. “No one can say we weren’t going for it.”

Third in GT Daytona qualifying was Patrick Lindsey in the No. 73 Park Place Motorsports Porsche 911 GT America, with a lap of 54.251.

It was an especially happy day for von Moltke: His father had received the results of medical tests he had taken, “and he’s cancer free,” said von Moltke. “So this is a good day.”

Saturday’s race will be “tough,” von Moltke said, because of the difference in speed of the Prototype Challenge and GT Daytona cars. Plus, “managing your tire wear will be important.”

Saturday’s race, the TUDOR Championship’s first visit to the historic track, will be two hours and 40 minutes on the tight 1.5-mile Lime Rock road course. Von Moltke will share his Audi with co-driver Christopher Haase on Saturday, while Prototype Challenge top qualifier Simpson will share his car with Mikhail Goikhberg.

Saturday’s schedule includes Round 6 of the Continental Tire Challenge, which takes the green flag at 10 a.m. The Northeast Grand Prix, Round 8 of the TUDOR Championship, takes the green flag at 3:15 p.m. IMSA.com and the IMSA app will stream in-car cameras, live timing and scoring, and IMSA Radio’s play-by-play. The Northeast Grand Prix will be aired on FOX Sports 1 on Sunday, July 26, from 5-7:30 p.m. ET.