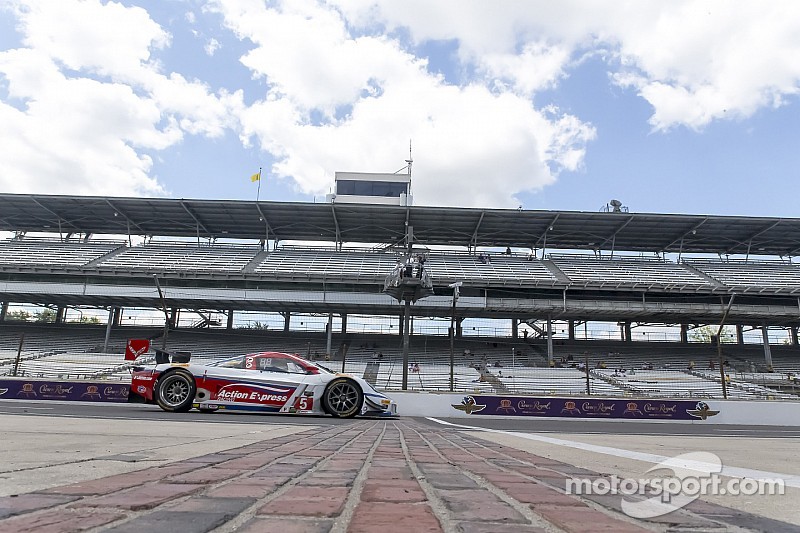 INDIANAPOLIS – Christian Fittipaldi set the fourth fastest time in IMSA TUDOR United SportsCar Championship qualifying on Thursday with a lap of 1:18.102-seconds to nab a starting spot on the second row of the grid for Friday’s Brickyard Grand Prix event.

The No. 5 Action Express Racing Corvette DP was the fastest among the Daytona Prototypes.

“It was good, I think we made progress through the whole day,” said Fittipaldi. “We came up to speed pretty good. We had a strategy in qualifying which was to wait three or four minutes to go out and I think that was the right choice. I hit a little bit of traffic when I was going to peak on my tires. But I can’t complain. We’ll see what tomorrow brings, we’re the fastest DP. We know who we’re fighting against in points and we’re ready for the battle tomorrow.”

Action Express Racing had just two practices ahead of Thursday evening’s qualifying session and the team was quickly up to speed and posted the fourth fastest time in the first practice. Barbosa then went quickest in the second practice with a lap of 1:18.322-seconds. In both sessions, the Action Express Racing Corvette DP was the fastest Daytona Prototype on track.

“We came to Indianapolis and tested and it’s kind of the same Indy that it’s always been,” said Team Manager Gary Nelson. “The sun comes out and the track slows down, the sun goes away and the track goes faster. So you kind of get caught in your changes between practice sessions. In the end we didn’t have much left. I think that was a pretty good run. We might have had one lap that could have been better, but we had some traffic. But to get the half a second that we needed for the pole would have been more than we had I think today. Indy should be hard to win - that’s why we want to win it so badly. Everybody brings their best here. We’ve brought our best and we’re going to try every possible way to get to the top of the podium knowing that nobody is going to hand it to us. We’re up for it!”