What to expect in the first Sebring 12 Hour since the merger.

The hallowed record book for Sebring's legendary 12-hour endurance race is being rejuvenated this week. For the first time since 2003, the team that won the Rolex 24 At Daytona is also entered in the Mobil 1 Twelve Hours of Sebring Fueled By Fresh From Florida, with a chance at a season sweep that once was cherished by the world's premier sports car racers.

Because Saturday's Twelve Hours really is just that.

It's a celebration of the new International Motor Sports Association-sanctioned TUDOR United SportsCar Championship, a result of the merger of the GRAND-AM Rolex Series and the American Le Mans Series.

The merger ensured that the two biggest sports car events in North America -- Daytona and Sebring -- would once again race consecutively to open the season, under the same sanction with the same classes. That drops a potential -- and historic -- achievement into the laps of Rolex 24 winners Christian Fittipaldi, Sebastien Bourdais and Joao Barbosa, co-drivers of the No. 5 Corvette DP entry from Action Express Racing, in the headlining Prototype class. 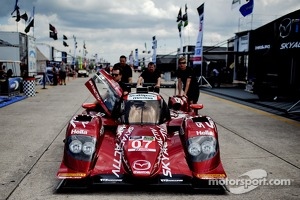 "Sebring, like Daytona, represents some of -- if not the -- most hallowed ground in North America for sports car racing," said IMSA President and Chief Operating Officer Scott Atherton. "The fact that we have Daytona and Sebring back-to-back on the TUDOR Championship schedule for many means its back to the way the good Lord always intended it to be."

"If we thought it was difficult in Daytona, Sebring is going to be three times as hard," said Action Express' Barbosa.

Added Fittipaldi: "In order for us to repeat what we did at Daytona we have to first finish the race. That is our main goal. Complete the 12 hours, go the distance and I think if all of that happens and we have a relatively trouble-free race, according to the lap times and how the car feels I think our chances of being up at the front again are very good. There is only so much that we can control during the race though so hopefully we just keep it clean and stay out at the front just like we did at Daytona."

The Twelve Hours is also the second round of a special competition within the TUDOR Championship schedule encompassing the four longest races -- the Tequila Patron North American Endurance Cup. Daytona kicked off the four-race competition; after Sebring, the Sahlen's Six Hours of The Glen at Watkins Glen International (June 29) and the 10-hour season-ending Petit Le Mans powered by Mazda at Road Atlanta (Oct. 4) will follow.

Qualifying is Friday afternoon. Saturday's race begins at 10:15 a.m. (ET), with FOX Sports 1 broadcasting the first three hours of the event. The balance of the race will be streamed on IMSA.com from 1-10:30 p.m. MRN-provided radio starts at 10 a.m. Saturday.

BMW Team RLL gets all done for Sebring