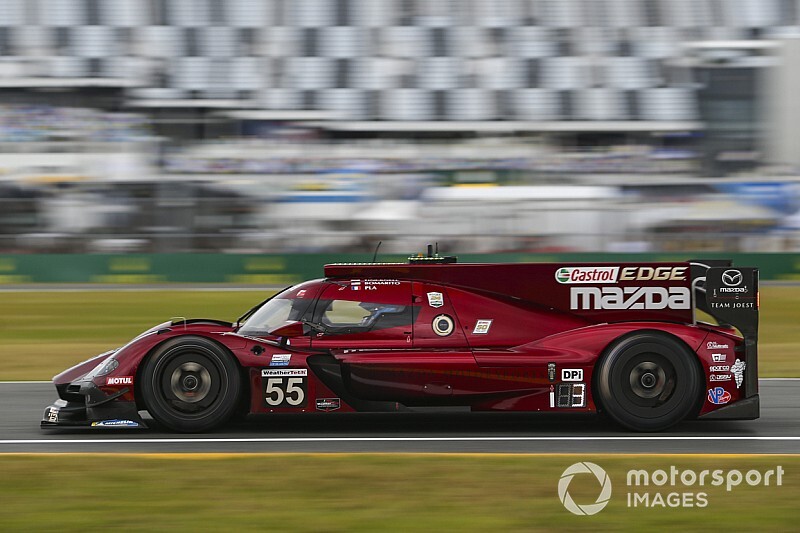 Olivier Pla sent Mazda Team Joest to the top of the times in second practice for the Sebring 12 Hours, just before running out of fuel, ahead of Saturday’s second round of the IMSA WeatherTech SportsCar Championship.

Pla lapped the 3.74-mile course in 1min46.834sec at the wheel of the #55 RT24-P to beat the best time of this morning’s pacesetter, the #31 Action Express Racing Cadillac DPi-V.R, which was this time piloted by Pipo Derani.

The Frenchman stopping out on track caused the second of two red flags during the session.

Jordan Taylor’s Wayne Taylor Racing Cadillac DPi-V.R was a mere 0.002sec slower than Derani in third, but 0.338sec clear of Helio Castroneves in the faster of Acura Team Penske’s ARX-05s.

Oliver Jarvis ensured both Mazdas were in the top five as he eclipsed Joao Barbosa in AXR’s second Caddy and Juan Pablo Montoya in the second Acura.

PR1/Mathiasen Motorsports’ Matt McMurry survived a spin that didn’t halt the session to go quickest of the two LMP2 Orecas.

Nick Tandy ensured Porsche top spot in GT Le Mans again with a best of 1min56.991sec, around 0.2sec quicker than the Ford GT of Sebastien Bourdais and 0.4sec ahead of the second Ford of Ryan Briscoe.

The BMW M8 of Philipp Eng was half a second off the ace but that was enough to grab fourth ahead of Jan Magnussen in the #3 Corvette C7.R and the second 911 RSR of Earl Bamber.

That BMW promise extended into GT Daytona with the Turner Motorsports M6 of Bill Auberlen setting the pace, a full 0.33sec ahead of Mirko Bortolotti in the Grasser Racing Lamborghini Huracan.

Scott Hargrove wound the Pfaff Porsche 911 GT3 R up to third ahead of the faster of the two Lexus RC Fs, that of new AIM Vasser-Sullivan driver, Philipp Frommenwiler.

The first red flag, which arrived just five minutes after the session started, was a result of Don Yount shunting the Precision Performance Motorsports Lamborghini Huracan, which he’s sharing this weekend with Brandon Gdovic and late signing Lawson Aschenbach.