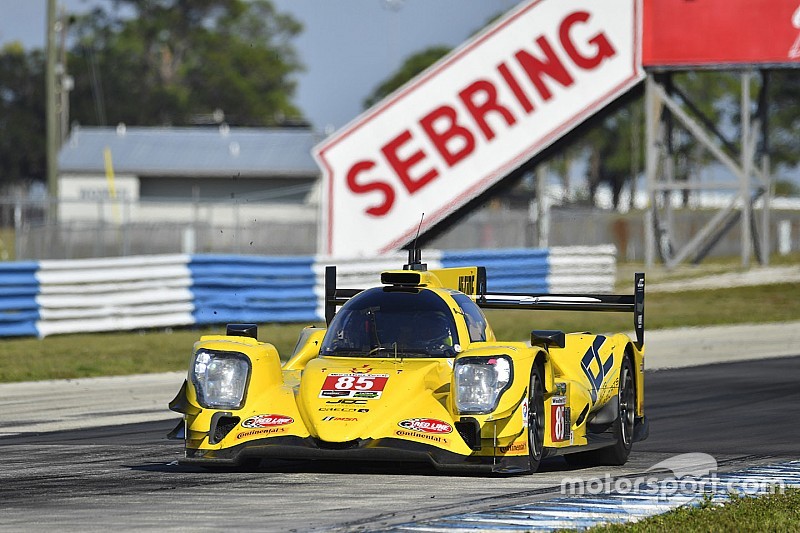 Stephen Simpson nailed fastest time in this morning’s opening practice for the 2017 Sebring 12 Hours, lapping the 3.74-mile course just 0.041sec than the fastest of the Cadillacs.

Joel Miller in the Mazda DPi-RT24P set fastest time on his fifth lap before ducking into the pits with his brakes on fire, before teammate Jonathan Bomarito went to P1 with a 1min50.417sec lap to make a Mazda 1-2.

This situation lasted only briefly before Jose Gutierrez in the #52 Ligier of PR1/Mathiasen Motorsport split the Mazdas with a time just 0.003sec slower than Bomarito’s best, then improved upon it.

However, Christian Fittipaldi then clocked a 1min50.027 lap on his 10th tour of the track in the #5 Action Express Cadillac DPi-V.R, but Stephen Simpson took P1 nudged the bar still higher in the JDC-Miller Motorsports ORECA, clipping 0.041sec from Fittipaldi’s best. Right after, a red flag flew for Robert Alon stranded out on circuit in one of the 3GT Racing Lexus RC Fs from the GT Daytona category.

A late surge from Mike Conway put the #31 Action Express Cadillac in third, just 0.092sec off the sister Cadillac, bumping Gutierrez down to fourth, and Bomarito and Miller down to fifth and sixth in the Mazdas.

In GT Le Mans, the three Ford GTs of Ryan Briscoe, Joey Hand and Billy Johnson ran 1-2-3 in the first half of the one-hour session, but although Scott Dixon and Stefan Mucke would improve the times of the #67 and #68 cars respectively, they couldn’t prevent Frederic Makowiecki narrowly edging top spot in the Porsche 911 RSR with a 1min57.109sec lap. Dixon held onto second, 0.15sec faster than Hand’s #66 Ford, with fourth going to the second Porsche, piloted by Laurens Vanthoor. Mucke wound up fifth for Ford, while Toni Vilander’s best in the Risi Competizione Ferrari 488 was sixth but a full second away from top spot. Next up were the two Corvette C7.Rs of Antonio Garcia and Tommy Milner.

In GT Daytona, Bryan Sellers produced his customarily excellent job to put the Change Racing Lamborghini Huracan top… albeit by less than 0.01sec! Second fastest was Lawson Aschenbach in the Stevenson Motorsports Audi R8 LMS, ahead of the similar car of Land-Motorsport, driven by Connor De Phillippi.