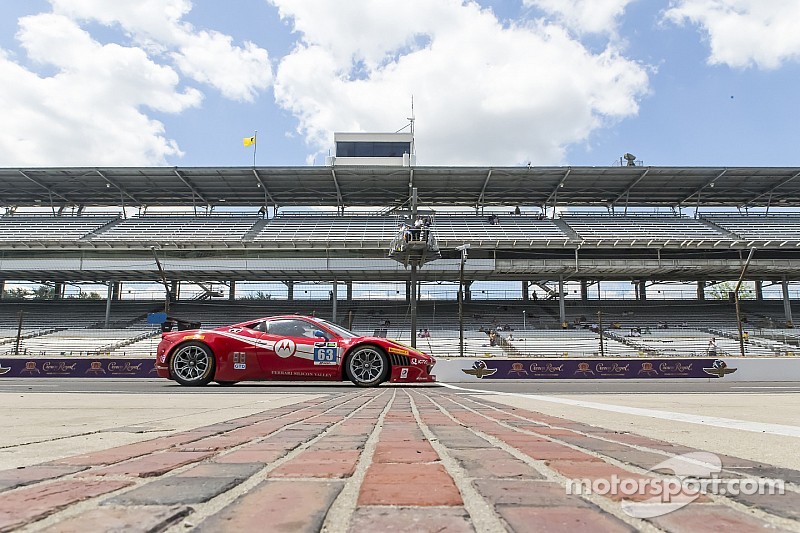 Scuderia Corsa brought its Ferrari to the front to claim its second win on the season.

Scuderia Corsa took its second TUDOR United SportsCar Championship victory of the year on Friday at the racing capital of the world - Indianapolis Motor Speedway.

In winning the Brickyard Grand Prix in the GT-Daytona class, Alessandro Balzan and Jeff Westphal scored their second win of the season and the third in North American endurance racing for the no. 63 Scuderia Corsa Ferrari 458 Italia.

Starting from the ninth position, Westphal moved the Ferrari through the field during the opening stages of the race. When an extended caution came out, the Scuderia Corsa team elected to stop at near the end of the caution period - giving up their leading position, but satisfying the minimum drive time requirement for Westphal. The strategy call would enable Balzan to challenge for the lead with an hour remaining. After executing a pass on the leading Porsche, Balzan had enough fuel to make it to the finish with a healthy advantage over the rest of the GT-Daytona field.

"Yesterday we had a hard day with some problems in qualifying," said Balzan. "But I knew the car could be really fast over a stint. And today, Scuderia Corsa gave me the perfect car, and it was a perfect race. The team strategy worked perfectly, and the car worked perfectly on the Continental tires. Jeff from ninth position, got up to first positon, and he did an incredible job. Coming from Italy, when I was a little baby I understood that Indianapolis is a very historic circuit. Now, I'm a little man, and I've won here. I think I will realize tomorrow where I won today."

The victory was Balzan's third, and Westphal's second, with Scuderia Corsa.

"First and foremost, a big thank you to the Scuderia Corsa team," said Westphal. "It is the 60th Anniversary of Ferrari racing in North America and we worked so hard to come back from a rough race at Canadian Tire Motorsports Park. Everybody in the team, Alessandro included, did a great job and we just tried to make our way up the field when we could. It was a really, really nice feeling to kiss the bricks."

"When you lead the race, it stings when you don't win," said Mattioli. "But certainly, I remember the picture of another Ferrari team kissing the bricks last year, and I thought 'that is on the bucket list!' So, this victory today is really amazing. This is the racing capital of the world, and I wouldn't pick any other place to win. The team did an amazing job. We had some issues yesterday, but we worked through them and everything worked out great. Jeff did a very good job in his stint, as he's been doing all year long. Alessandro did a fantastic job - he pushed hard lap after lap and dealt with a lot of traffic and a lot of pressure. To win again this season is unbelievable."

Scuderia Corsa will next compete at the Continental Tire Road Race Showcase at Road America in Elkhart Lake, Wisconsin on August 8-10.

Action Express Corvette wins the battle at the Brickyard