Daytona Beach, Fla. — Level 5 Motorsports team owner Scott Tucker, driver of the No. 55 Boardwalk Ferrari, claimed his 100th career race victory today in the opening round of the 2014 North American Ferrari Challenge Series at Daytona International Speedway. Tucker wasted no time getting to the top of the leader board and stayed out front for the landmark win.

“I’m so proud to be back on the podium with Boardwalk Ferrari for this win,” Tucker said. “This is a milestone that I am really proud of and I couldn’t be happier to share it with Ferrari at this great racetrack.” 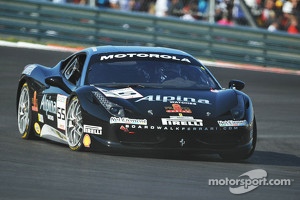 Tucker has had a storied career behind the wheel en route to 100 wins — many of which came during Ferrari Challenge races. His success in the series earned him the title of the most successful driver ever to compete in the Ferrari F430 in Challenge competition. That incredible run of success was highlighted by an amazing 2009 season in which Tucker scored 10 victories.

When the series’ current model, the 458 Challenge, was introduced to competition in 2011, Tucker was the first driver to take the checkered flag in the car’s debut race.

“I have a long history with Ferrari,” Tucker said. “These are the world’s greatest sports cars and I always enjoy racing them. To be able to race with such a strong field of competitors makes it all that much more fun.”

Tucker and the Ferrari Challenge Series will be back on track at Daytona International Speedway on Saturday for the second race of the weekend at 9:35 a.m. ET.

But, the 45-minute race is just the beginning of the day for Tucker who will move to the TUDOR United SportsCar Championship and the world-famous Rolex 24 At Daytona. Tucker’s Level 5 Motorsports has entered two Revo-sponsored Ferrari 458 Italia GT3s into the 24-hour endurance classic.

Tucker will start 4th in the GTD class with fellow drivers Jeffrey Segal, Townsend Bell, Bill Sweedler and Alessandro Pier Guidi in the No. 555 entry. Tucker will also share driving duties in the No. 556 Ferrari with Terry Borcheller, Guy Cosmo, Milo Valverde and Mike LaMarra. That car rolls off 6th.

No. 33 Viper GT3-R stays on pace in Friday’s final practice for The Rolex 24