Team qualified both cars in the top five.

Daytona, Florida - RSR Racing kicked off the first day of on-track activities with a solid qualifying effort in both the number 09 Lino'spresso and the number 08 AutoMaxUSA.com Oreca FLM 09 Prototype Challenge cars as part of the 52nd running of the Rolex 24 at Daytona. The team showed that they're prepared to compete for the inaugural TUDOR United Sports Car Championship in the PC class by qualifying 3rd and 5th for the seasons longest and most grueling event at the 3.56 mile Daytona International Speedway. 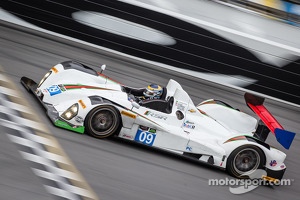 Bruno Junqueira set a fast lap time of 1:41.932 in the fifteen-minute qualifying session only to fall short by less than 16/100th of a second of the PC Class pole position. Landing third in class and 17th overall in the sixty-seven car field, the Brazilian native is pleased with the qualifying effort and is looking forward to the 24-hour endurance event this weekend.

"I am happy with the qualify, I really tried hard to be on the pole but we made a little mistake on the tire pressure," remarked Junqueira. "I think we are competitive, that's the most important. It's a long race. I'll start in a good position, and in a good pace. Let's make a clean race and be reliable, that's the key."

Alex Tagliani conquered the daunting task of taking a brand new racecar that just saw the race track for the first time today and qualified 5th in class and 20th overall. The Canadian set a fast lap time of 1:42:187, a mere 4/10th of a second from the PC Class pole position. Tagliani, the 2011 Indy 500 Pole Sitter, believes the team will be competitive as more laps are run.

"You always feel with a few more laps and time you would be better. If I would have been here for the Roar I think I would have been more ready," explained Tagliani. "Being within 4/10th of guys who have thousand of laps in these cars I am pretty happy, and happy for the team. There is more in the car and more in me so hopefully we can be there at the end of the twenty-four and have a good showing for the team and everyone."

Duncan Ende on what it will take to win the 24 hour race: "We got fairly minimal laps but the car is feeling comfortable. I think we are going to have a good race car, the balance is pretty drivable. For the 24 hour, it going to be a question of making good decisions and not making bad decisions and keeping out of the way of people making their own bad decisions. From that stand point we're looking good so as long as we make good choices we'll be fine."

David Heinemeier Hansson's thoughts on racing under the lights at Daytona: "Of all the tracks that I've driven in the dark this is probably the easiest. Everything is very well lit, there are no corners that are sketchy because you can't see. It's nice to have the night for atmosphere but it's not as much of a challenge as it is at some other tracks. I was comfortable in the car, it felt good."

Gustavo Menezes looking forward to a strong finish: "We just got in the car enough to get a rhythm and that's all I really needed. To know where my reference points on the track are for tomorrow, we'll have six laps but we'll be in good shape. I've known Bruno for a while and know he can handle that thing, together with him and the consistency from David and Duncan that we need I think we can put some strong stuff together this weekend."

Rusty Mitchell on getting more comfortable in the race car: "I'm comfortable with the team. The car is fast for sure. I need to change a little bit of the seat that I'm in and get a little more comfortable for driving and just get more time in the car."

Conor Daly on running under the lights at Daytona: "It's really cool, a good experience. It's nice to finally get a couple consecutive laps in the car and it's feeling really good to me. It's all new to me also. It's getting up to speed and the team has done a great job with Alex to get to this point so I'm looking forward to the race."

More from
RSR Racing
IMSA Others