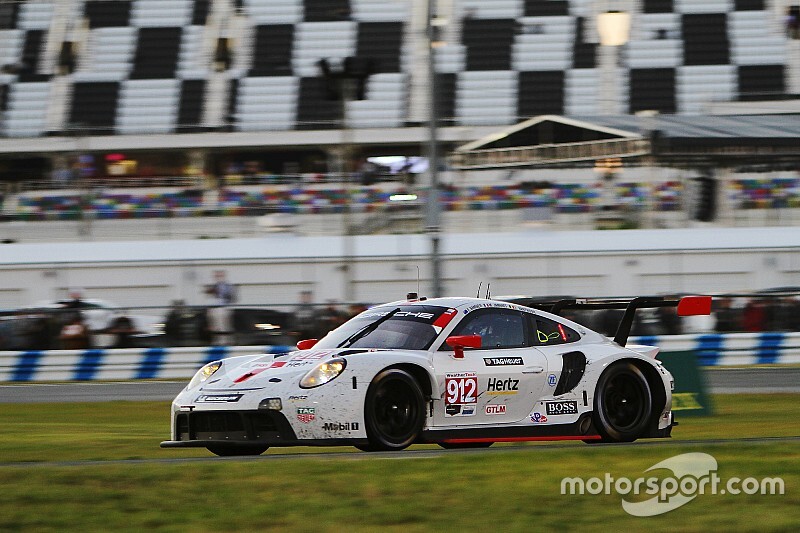 Wayne Taylor Racing is in control of the 58th Rolex 24 Hours at Daytona with two hours to go, but the GT Le Mans battle should go down to the wire as BMW battles the two Porsches and a Corvette.

Following a pitstop at the 22-hour mark, the #912 Porsche 911 RSR-19 of Earl Bamber has just wrested the GTLM class lead from the #24 Rahal Letterman Lanigan run BMW M8 which John Edwards had held before handing off to Jesse Krohn. However, the black Bimmer remains filling the 911 RSR’s mirrors.

Just a dozen seconds back, Nick Tandy in the #911 Porsche has taken over from Matt Campbell and has just grabbed third from Jordan Taylor in the #3 Corvette C8.R.

Bad news for Risi Competizione is that its Ferrari 488 GTE is probably now fully out of the fight having just received a drive-through penalty for James Calado having the car’s wheels turning while still on the jackstands.

Just after the 20-hour mark, Ryan Briscoe retook the lead for WTR from Joao Barbosa's JDC-Miller MotorSports Cadillac, and a consistently fast stint saw him hand over the #10 car to teammate Kamui Kobayashi with a 24sec lead.

The ex-Formula 1 star and current Toyota LMP1 racer extended the Konica Minolta-liveried car's advantage to almost half a minute with two hours of the race to go.

Oliver Jarvis has ceded the driving seat of the #77 Mazda RT24-P to Tristan Nunez who holds a 17sec advantage over Loic Duval in the #5 JDC-Miller Cadillac.

The #6 Acura Team Penske ARX-05, currently driven by reigning Indy 500 champion Simon Pagenaud, is fourth, three laps off the lead but now ahead of the #55 Mazda which fell back with a lack of power and then a long pitstop.

In LMP2, Ben Hanley’s DragonSpeed car runs two laps clear of its nearest opposition, the PR1/Mathiasen car which dominated the first third of the race.

Mirko Bortolotti in the WRT Speedstar Audi Sport R8 LMS is just 16sec behind, trying to stay ahead of the Wright Motorsports Porsche 911 GT3 R. The Black Swan Racing Porsche of Sven Muller is another 90sec down in fifth place.