Christian Fittipaldi and his Action Express Racing teammates left the speedway feeling good about their chances of winning the 52nd Rolex 24 At Daytona.

DAYTONA BEACH, Fla. -- Three days of "Roar Before the Rolex 24" test sessions wrapped up Sunday at Daytona International Speedway with a somewhat odd result. The fastest lap came from the very first session, withstanding seven subsequent sessions and a total track time of 12 hours, 45 minutes over a three-day period, 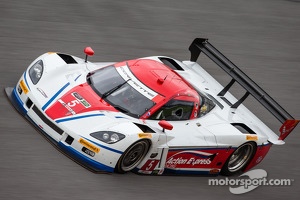 A disclaimer: This was a test -- and only a test. Nonetheless, Christian Fittipaldi and his Action Express Racing teammates left the speedway feeling good about their chances of winning the 52nd Rolex 24 At Daytona, set for Jan. 25-26, the season-opening race for the new TUDOR United SportsCar Championship.

The weekend's other top times by class:

IMSA Vice President of Competition and Technical Regulations Scot Elkins called the "Roar" a success, saying, "we still have a little bit of work to do [on competition] before the Rolex 24 but we made the gains we expected to make [since a test in November]. We also got the new rule book out to the teams during the test.

"We feel like we're in a good position. There's a feeling of optimism in the garage."

Testing, of course, is about more than posting fast laps. It sometimes is about revealing potential problems that could derail the actual race effort. The Ford/Riley Prototype teams fielded by Chip Ganassi Racing and Michael Shank Racing were dealing with that sort of situation; after posting some impressive times Friday and Saturday, potential exhaust system issues resulted in both teams waving off Sunday's final practice sessions to head back to their shops and go to work.

After all, time does grow short. Only three weeks to go, until the Rolex 24.