The Wayne Taylor Racing Acura will start next week’s Rolex 24 at Daytona from pole, after Ricky Taylor staved off a bold challenge from Richard Westbrook’s JDC-Miller Cadillac, that saw the pair make contact on the final lap of the 100-minute qualifying race.

From pole position, Vautier’s JDC-Miller MotorSports Cadillac DPi-V.R made a brilliant start as Tristan Nunez came up from the second row to claim second in the Action Express Racing Caddy – but only until the twisty infield when Renger van der Zande made several brave passes to claim second – up from sixth – in the Chip Ganassi Racing #01 Cadillac.

Tom Blomqvist of Meyer Shank Racing slotted his Acura ARX-05 into fourth ahead of the Wayne Taylor Racing Acura of Filipe Albuquerque. Alex Lynn was treading cautiously in the second Ganassi car and fell to sixth ahead of Jimmie Johnson in the Ally Racing AXR Cadillac.

On Lap 7, Nunez got ushered off the road while lapping GTD cars, allowing both Blomqvist and Albuquerque to move their Acuras into third and fourth respectively, and he would soon lose fifth to Lynn’s Ganassi car.

Nunez handed off the AXR #31 to Pipo Derani at Lap 15, with Blomqvist giving up his MSR Acura to Oliver Jarvis at the same time. Simultaneously, van der Zande was applying pressure to leader Vautier, and only half a second back Albuquerque was watching his mirrors for Ganassi debutant Lynn.

The two Ganassi cars pitted on Lap 18, van der Zande giving the wheel to Sebastien Bourdais and Lynn being replaced by Earl Bamber. Next time by Vautier stopped to let Westbrook in, handing the lead to Albuquerque. A couple of laps later, both Ganassi cars had to serve drive through penalties for exceeding the pitlane speed limit.

Once everyone had stopped, the early stoppers MSR and AXR were in front, Jarvis leading Derani by 2.5sec – depending on traffic – with Ricky Taylor pedaling the WTR Acura a further 6 sec back and under pressure from Westbrook. Kamui Kobayashi had taken over the Ally Cadillac from Johnson but was fifth, 22sec off the lead.

On Lap 26, Westbrook passed Taylor for third as they negotiated traffic, and started trying to close the 5sec gap to the Jarvis vs Derani battle up front.

Derani would then make his second stop with 40mins to go, leaving Jarvis with a 2.3sec ahead of Westbrook and Taylor. But two laps later, MSR pitted Jarvis and the rest of the DPi cars swiftly followed suit. They would shake out with Westbrook leading Jarvis, but with Taylor’s Acura ahead of both, and Derani in fourth. Kobayashi was still trying to play catch-up, while Bourdais and Bamber in the Ganassi cars sat at the back of the class, praying for a yellow.

Taylor and Westbrook pulled away from the pack to enjoy a thrilling battle up front, each showing great judgment as they picked their way through traffic. Derani passed Jarvis for third with less than 15mins remaining, and Kobayashi also passed the MSR car as Jarvis desperately tried to fuel save. Derani could not, however, and ducked into the pits with four laps remaining, dropping to the back of the class, and promoting Kobayashi to third.

On the very last lap, Westbrook saw a Cadillac-sized hole down the inside of Taylor at Turn 1, and nudged the Acura, causing Taylor to wiggle and Westbrook to spin. The JDC-Miller driver recovered in time to beat Kobayashi for second, with Jarvis beating the two Ganassi cars and Derani. 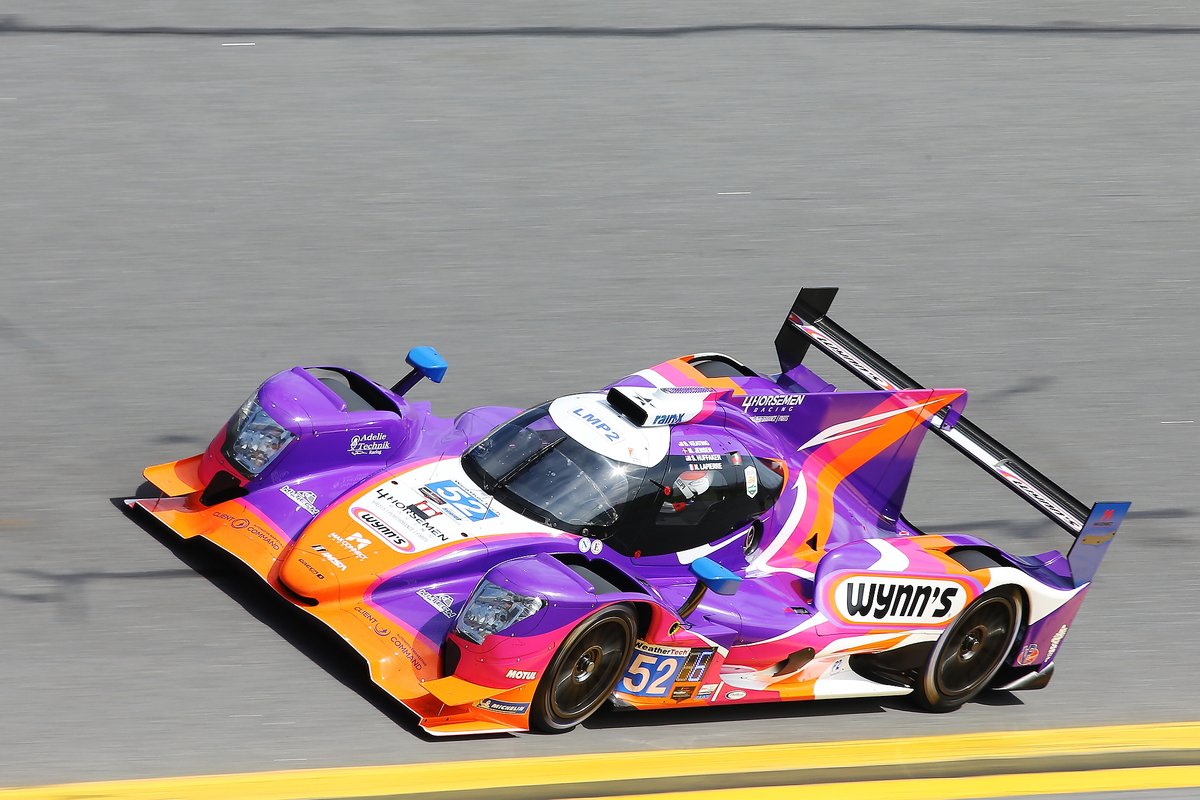 In LMP2, Steven Thomas beat PR1/Mathiasen Motorsports teammate Ben Keating at the start to claim the lead, the pair of them leading the High Class Racing entry of Denis Andersen, with Fritz van Eerd fourth for Racing Team Nederland and Eric Lux fifth for DragonSpeed. On Lap 6, Keating took the lead from Thomas, while the pair of them dropped Andersen by more than eight seconds.

However, Lux was making strong progress, and had moved the DragonSpeed car into third by Lap 10 and started closing on Thomas.

Once all the LMP2 cars had made their pitstops, Mikkel Jensen and Jonathan Bomarito continued their teammates’ good work in a PR1/Mathiasen 1-2 ahead of Devlin DeFrancesco in the DragonSpeed car. Further back, James Allen ran fourth for G-Drive by APR ahead of Dylan Murry in the Racing Team Nederland car, but these two exchanged places on Lap 26.

In the second half of the race, Jensen kept pulling away from teammate and 40th birthday boy Bomarito, whose nearest pursuers following their second stops were Fabio Scherer in the High Class car, and Rene Rast of G-Drive. The DragonSpeed car had dropped to fifth.

In the closing laps, Rast demoted Scherer and closed up on Bomarito but was never close enough to try and grab runner-up spot, with Jensen holding on to win. 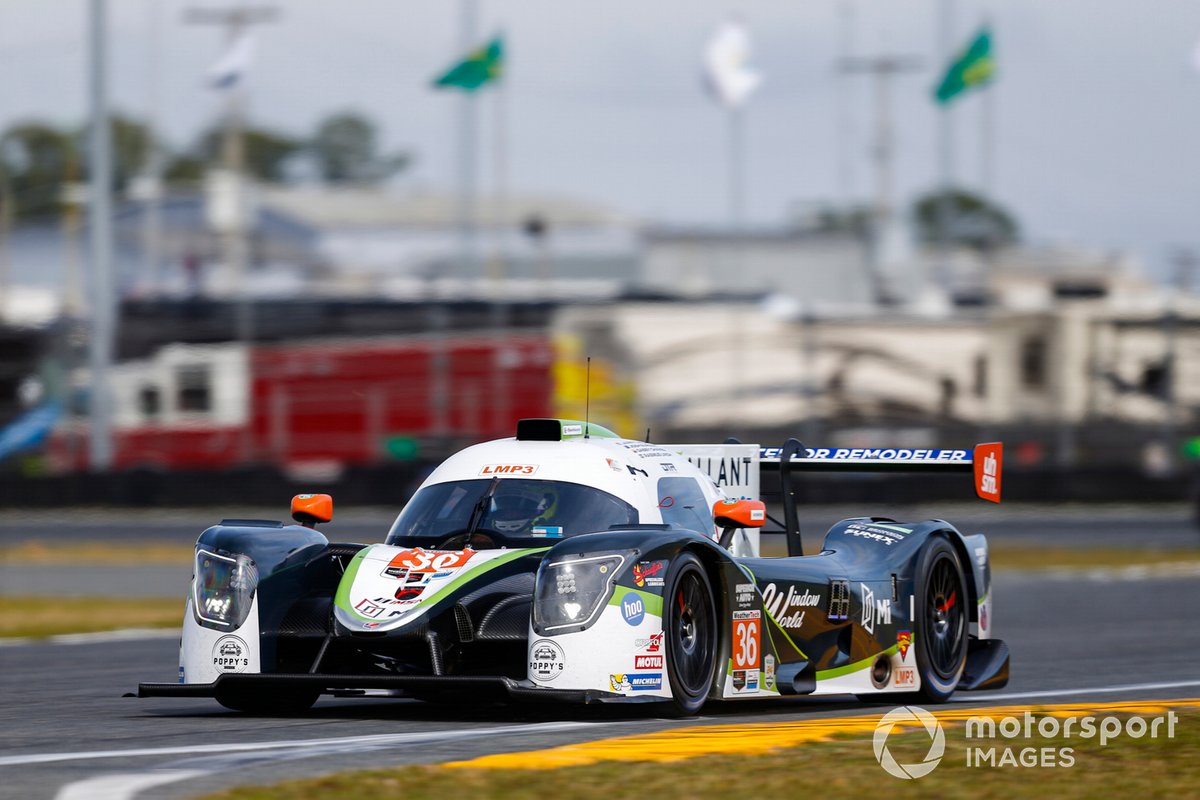 Cameron Shields of Muehlner Motorsport led from the start Andretti Autosport and Gar Robinson’s Riley Motorsports entry, but the car went behind the wall within the first six laps, allowing Orey Fidani of Forty7 Motorsport into third. However, with barely more than 40min to go, Shields pitted, apparently terminally, handing the class lead to Josh Burdon who was now driving the Andretti car.

Burdon came home 65sec ahead of the other Muehlner car, shared by Moritz Kranz and Ayrton Ori, with Kuno Wittmer bringing the Forty7 car home third, albeit three laps down. 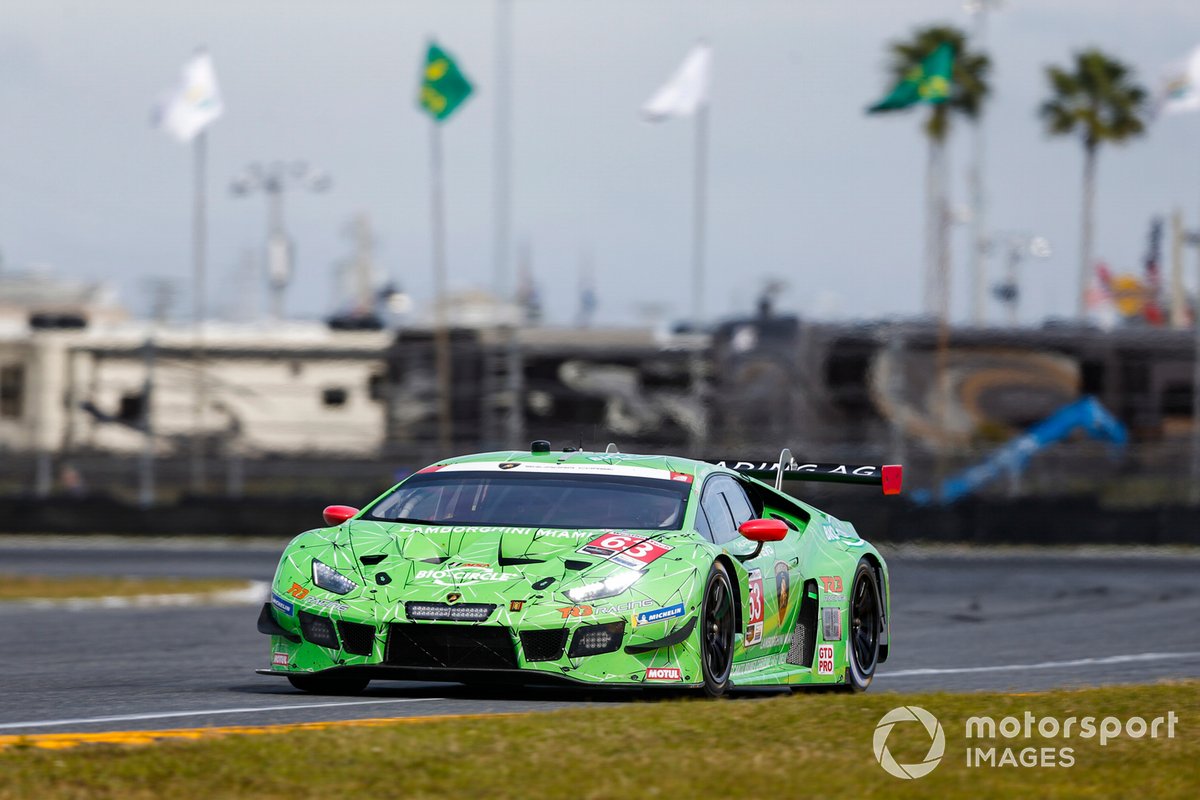 Caldarelli passed Gunn to claim third, while by Lap 18 Andlauer had not only re-passed Engel but was up to fifth ahead of Barnicoat’s Lexus.

Following the pitstops at around half distance, Pfaff continued to lead with Felipe Nasr in the driving seat, and it was still pursued by another Porsche but it was now Alessio Picariello in the #79 WeatherTech Porsche who was in second, 3sec adrift. The KCMG Porsche had tumbled to 10th in class with Patrick Pilet at the wheel, IMSA Radio reporting a refueling issue that had cost the team half a minute. In third was Mirko Bortolotti’s TR3 Lamborghini ahead of Alex Riberas in the Heart of Racing Aston Martin and Kyle Kirkwood’s VSR Lexus.

The battle for the lead between Nasr and Picariello closed right up with 30mins to go and finally the WeatherTech car got past with less than 25mins remaining, leaving Nasr to try and fend off Bortolotti. He succumbed to the Lambo driver with 19mins remaining and Bortolotti claimed the lead on their 47th lap with 14mins remaining.

Further back, Kirkwood had dropped to seventh, so that Jules Gounon’s WTR Mercedes ran fourth ahead of Riberas in the Aston, and the second WTR Proton Mercedes in the hands of Dirk Muller was sixth. Muller would pass Riberas for fifth in the final few minutes. 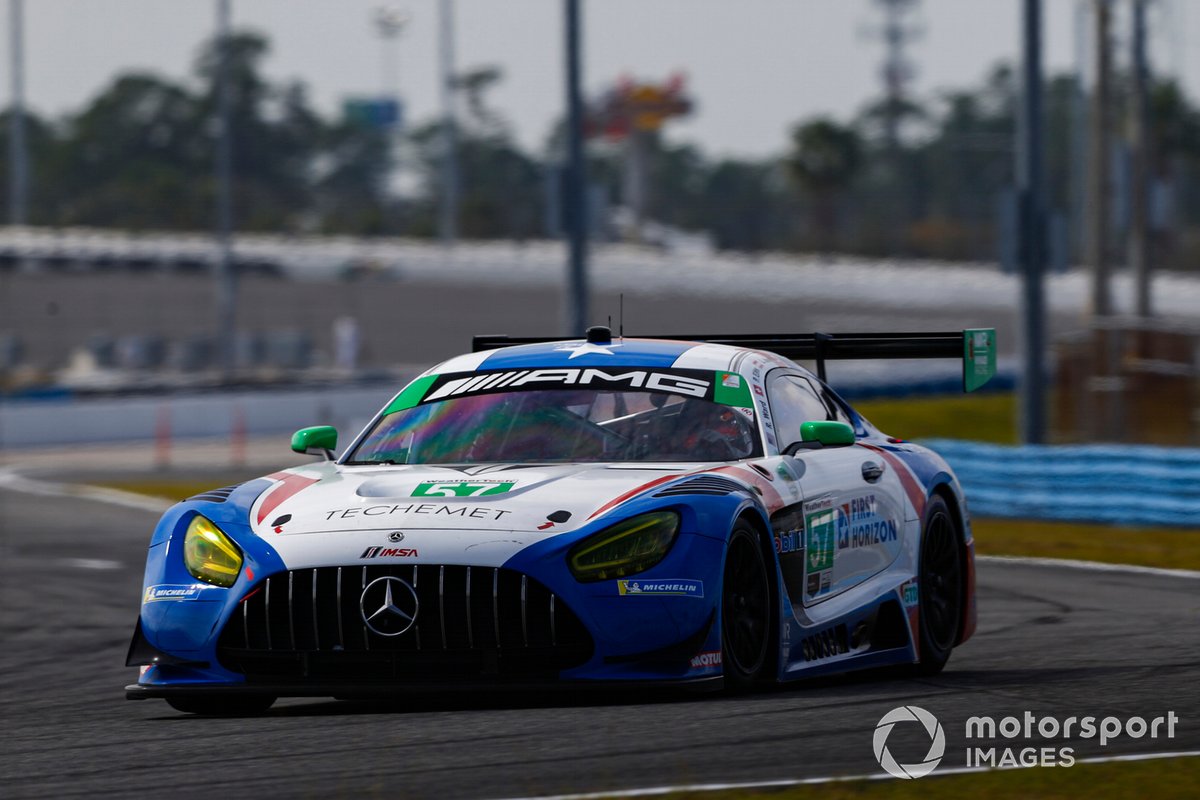 In GTD, Winward Racing’s Mercedes led in the hands of Russell Ward, chased by John Miller in the Crucial Motorsport McLaren 720S, while Kenny Habul retained his remarkable third place from qualifying ahead of Michael De Quesada in the Alegra Motorsport Mercedes. However, Mike Skeen’s Gilbert Korthoff Motorsports Mercedes charged in the opening stint, and climbed to third ahead of Habul.

After the stops, Lucas Auer kept Winward up front, with Paul Holton chasing him from behind the wheel of the Crucial McLaren. Townsend Bell ran third in class in the #12 VSR Lexus, just ahead of Guy Cosmo in the GKM Benz.

However, Jan Heylen, taking over the Wright Motorsports Porsche from Ryan Hardwick, had been charging hard throughout his stint and passed Bell for third at the last gasp, while Raffaele Marciello claimed fifth in the SunEnergy1 Mercedes ahead of Cosmo. Up front, Auer held on to claim class honors by a mere half second ahead of Holton.