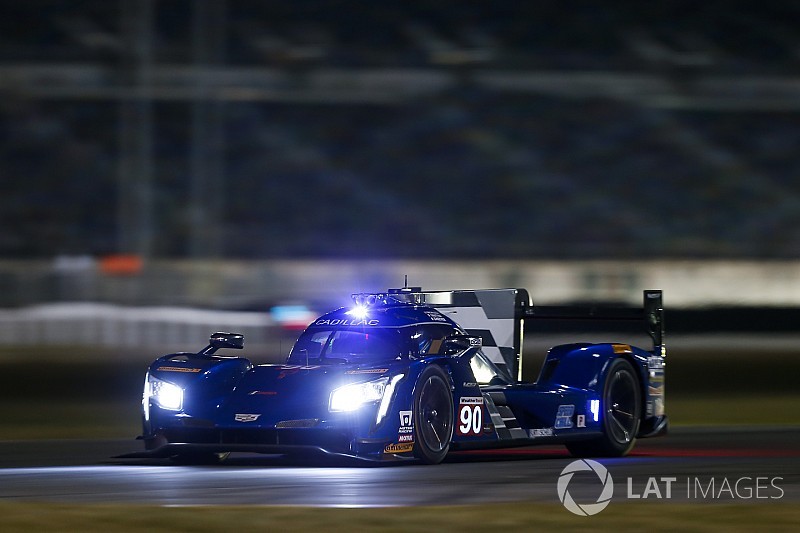 Former IndyCar driver Vautier went fastest late on in the 90-minute session with a best time of 1m37.215s in the #90 Cadillac DPi-V.R, ousting Helio Castroneves and Team Penske from the top spot.

Castroneves, who narrowly missed out on pole to Wayne Taylor Racing's Renger van der Zande in qualifying, led for much of the running with a 1m37.413s lap, which proved enough for second.

Completing the top three was the #22 ESM Nissan DPi, driven by Pipo Derani, which was a further tenth back and fractionally ahead of the fourth-placed #55 Mazda Team Joest car of Harry Tincknell.

The #23 United Autosports Ligier JS P217 was fifth-fastest - and best of the LMP2s - courtesy of an early 1m37.557s effort from Lando Norris, who shares the car with Fernando Alonso.

WTR's pole-sitting #10 Cadillac was ninth-fastest, half a second off the pace with Jordan Taylor at the wheel.

Sebastien Bourdais set the fastest time in the GT Le Mans class in the #66 Ford GT, setting a best time of 1m43.675s - two tenths up on Richard Westbrook's best effort in the sister #67 machine.

The pole-winning #3 Corvette driven by Antonio Garcia was fifth in class behind the #82 Risi Ferrari and the best of the Porsches, the #912.

Mirko Bortolotti put the #11 Grasser Lamborghini Huracan on top in the GT Daytona class. However, the car has been consigned to the back of the grid after failing the stall test in post-qualifying tech inspection.

Alonso: Daytona “the least important qualifying of my life”