Action Express Racing’s #31 Cadillac DPi-V.R has taken the lead of the Rolex 24 Hours after a stunning drive in the wet from Mike Conway, and then a swift switch back to dry tires. 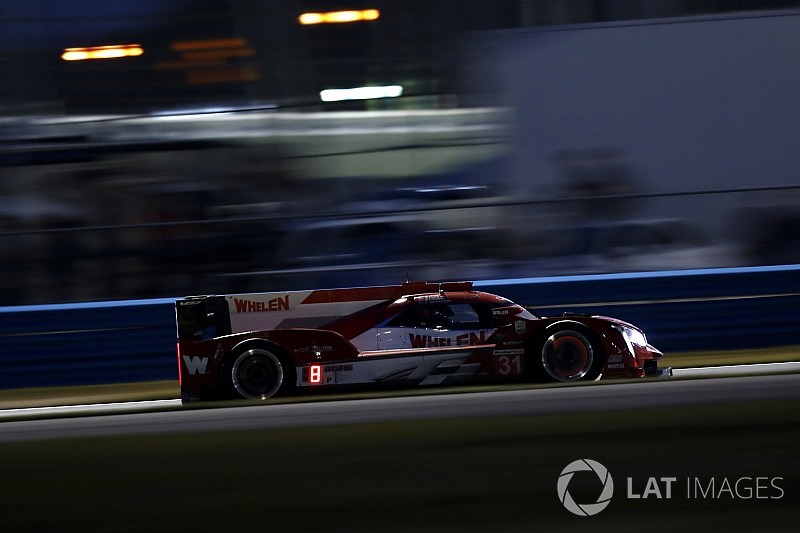 Rain hit the course just past the five-hour mark, and on wet tires, leader Christian Fittipaldi in the #5 AXR Cadillac started struggling badly, losing time to second placed Helio Castroneves in the #7 Penske-Acura.

But even as the three-time Indianapolis 500 winner swept into the lead, Conway and United Autosports’ Lando Norris were zooming onto the tails of the Brazilians.

Jordan Taylor, who’d suffered a right-rear puncture just before the rains arrived, was the first to switch back to slicks as the track dried, and immediately started lapping seven seconds faster than the wet-shod leaders.

AXR responded by pitting Conway two laps later and that was enough to see him into the lead once Castroneves and Fittipaldi had also stopped.

The team also did a fine job to turn the #5 car around faster than Penske could the #7 car, but within a couple of laps, Castroneves had slipped ahead once more to split the AXR Cadillacs - albeit some seven seconds behind Conway.

Taylor’s excellent driving and WTR’s strategy has gotten the #10 back up to fourth and onto the lead lap, now just half a minute off the lead and 11s clear of Dane Cameron in the #6 Penske-Acura.

The late stop for Norris has seen the #23 Ligier slip back to sixth, ahead of Olivier Pla in the #2 ESM Nissan, Lance Stroll in the Jackie Chan DC Oreca and Bruno Senna in the second United Autosports car.

Eddie Cheever III’s struggles in the wet have seen the #90 Spirit of Daytona Cadillac slip down to 10th, but it now has Tristan Vautier at the wheel, turning some stunning laps.

Following their switch to wet tires, Sebastien Bourdais and Scott Dixon made neat work of slicing and dicing their way past Marcel Fassler, but the Swiss Corvette #4 driver heroically kept going on slicks, losing only 6s per lap to teammate Jan Magnussen.

His bravery by shunning a pitstop kept him on the lead lap in GTLM, but he’s now almost a minute adrift of the Fords, but ahead of Patrick Pilet in the #911 Porsche 911 RSR, Magnussen and the Risi Competizione  Ferrari 488 of Toni Vilander.

The #25 BMW M8’s right-front tire blew on the banking and Bill Auberlen kept it off the wall but still lost his fender and was pushed behind the wall for repairs.

Franck Perera did a good job to keep his Grasser Lamborghini pointing the right way having also elected to stay on slicks in the worst of the track conditions, and runs fourth as a result.