Action Express Racing continued to hold a healthy advantage at the head of the field after four hours in the Rolex 24 at Daytona. 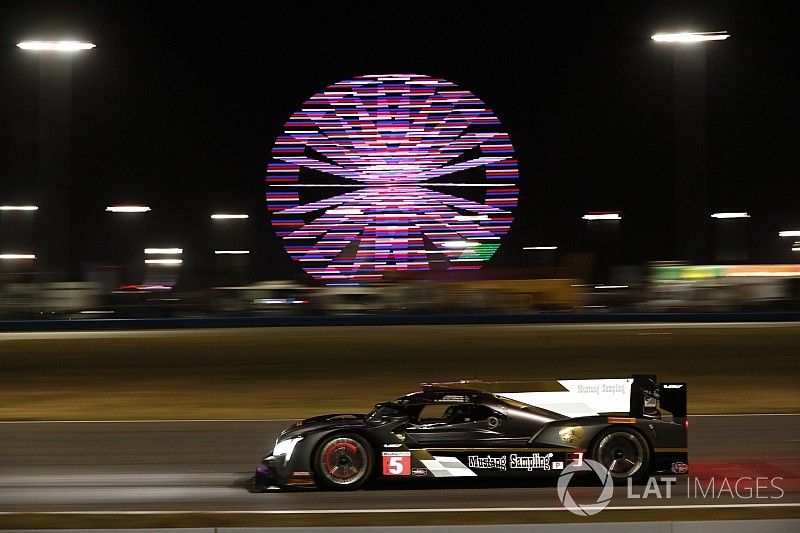 After the first full-course yellow of the race was called at the two-and-a-half hour mark - a result of the #38 Performance Tech Oreca LMP2 stopping out on track - Joao Barbosa was able to stretch his lead in the #5 Cadillac DPi-V.R.

Barbosa handed over to teammate Christian Fittipaldi just shy of the four-hour mark, with the Brazilian holding a seven-second buffer over the second-placed #2 ESM Nissan DPi of Ryan Dalziel.

The #22 ESM car had emerged as AXR's nearest challenger in the third hour, but a right-rear puncture for Pipo Derani dropped the car well outside the top 10 and several laps down.

Cadillac continues to have two cars in the top three courtesy of the pole-sitting #10 Wayne Taylor Racing entry of Jordan Taylor, which sat 10 seconds behind Dalziel's Nissan.

The #7 Acura of Simon Pagenaud lost places after being punted into a spin by Stuart Middleton in the #31 AXR Cadillac, with the Briton earning a drive-through penalty in the process.

After a disastrous opening two hours for the Joest-run Mazdas, the #77 car suffered a left-rear puncture in the fourth hour that left it 14 laps down on the leaders.

Ford continued to lead the way in the GT Le Mans class, Dirk Muller holding a six-second advantage in the #66 car over the best of the Porsches, the #911 of Frederic Makowiecki.

The hefty advantage Ford built early on was wiped out by the safety car, and while it continues to have superior pace it couldn't pull away as emphatically after the restart.

After its slow first pitstop, the #67 Ford GT had recovered to third ahead of the two Corvettes.

GT Daytona was led by the Team Riley #33 Mercedes AMG-GT3 of Luca Stolz, narrowly ahead of the #29 Land Motorsport Audi of Christopher Mies.